Most Madden gamers just look at overall ratings to determine how good a player is or how well he will play on the field.

Recently we have been going over ways to get a better understanding of how well your players will perform outside of just looking at the ratings EA Sports provides.

Today we are continuing with that theme, this time looking at an often forgotten about trait: QB Release Animation.

If you are a hardcore fan and were paying attention last June when EA Sports started releasing information about Madden 20, buried in a detailed blog post was this nugget of information:

“The fastest throwing motion in the game is Aaron Rodgers, to replicate how incredible his release is in real life. The next fastest tier is all the other Signature QBs, and one of our generic animation sets.”

That post later goes on to say, “After the ‘Signature’ tier, we have our true generic, which will be applied to non-starters & Nick Foles, and out of position players who have shown they are quality passers, like Mohammad Sanu, or former college QBs.”

This information my not seem all that important but it has a huge in-game impact.

To demonstrate this, we took the Green Bays Packers who have 3 quarterbacks on their default roster.

To prove that the quick release of the ball is dependant on the QB throwing style animation (instead of hardcoded into Aaron Rodgers) we changed Tim Boyle’s animation to the same as Aaron Rodgers’ Slinger 1.

We took 3 of the same throws against the same defense with each of these 3 quarterbacks.

Keep in mind that this won’t change your quarterbacks’ accuracy or throw power. If he is innaccurate, he will still be inaccurate but he will get the ball out much quicker.

Compare the results below.

Right after we receive the snap, we attempt to throw the pass to the X receiver on the slant route. Notice how on the 2 quarterbacks with Slinger 1, the release is much faster allowing the ball to our receiver much sooner.

When we release the pass, look at where the target icon for where the ball is going to land is. With our Slinger 1 quarterbacks, it is right inside the numbers. With our Generic 3 quarterback, it is much closer to the hashmarks.

This might not seem like a lot but those few yards where the ball doesn’t come out quick enough will often run your wide receiver right into a defender.

Not only that, but the extra half second or so that Slinger 1 quarterbacks get the ball out quicker will result in much fewer sacks.

Unlike just about anything else that directly impacts how a player performs in Madden 20, the throwing motion is editable in Franchise mode.

Just go to edit player and scroll over a few spots until you see “QB Style” then set it to Slinger 1. 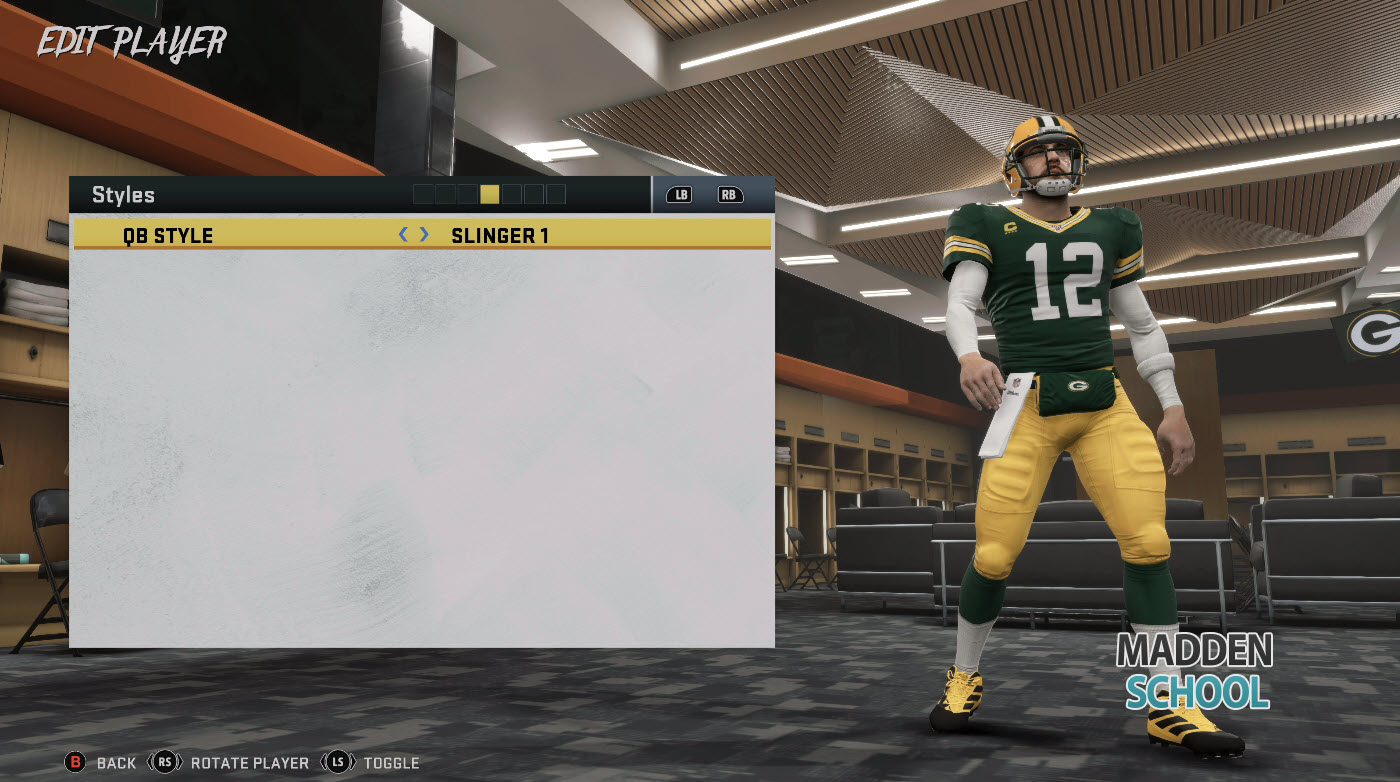 This will give any quarterback the animation that Aaron Rodgers gets when passing regardless of whether they are a 60 overall 3rd string QB or a franchise quarterback.

You want to stay away from all of the Generic throwing motions such as Generic 3 pictured on DeShone Kizer above.

Slinger 1 is the fastest throwing motion but Slinger 2 and 3 aren’t too far behind. Anything other than those will force your quarterback into a long wind up which will result in more interceptions and more sacks.

If you make this change in an online franchise, it will show up in the transaction log just the same as if you changed your quarterback’s thigh pads or jersey number. So go ahead and give it a try and let us know how it worked out for you!