A mistake that a lot of Madden players make is just looking at overall player ratings when deciding which team to select or whether or not to trade for a player in franchise mode.

Today, we are going to go over what you need to look at to determine the real ratings of players instead of the ratings EA Sports provides us.

In this post, we are going to go over a real world example from an online franchise looking at offensive linemen. Then we’ll go over how to use this thinking to make better trades and build better teams in Madden 20.

In this first example we are going to take a look at 2 fictional players from auto-generated draft classes: An 88 overall left guard and an 83 overall right tackle. Morale has given them both a +1 overall boost to 89 and 84 overall. 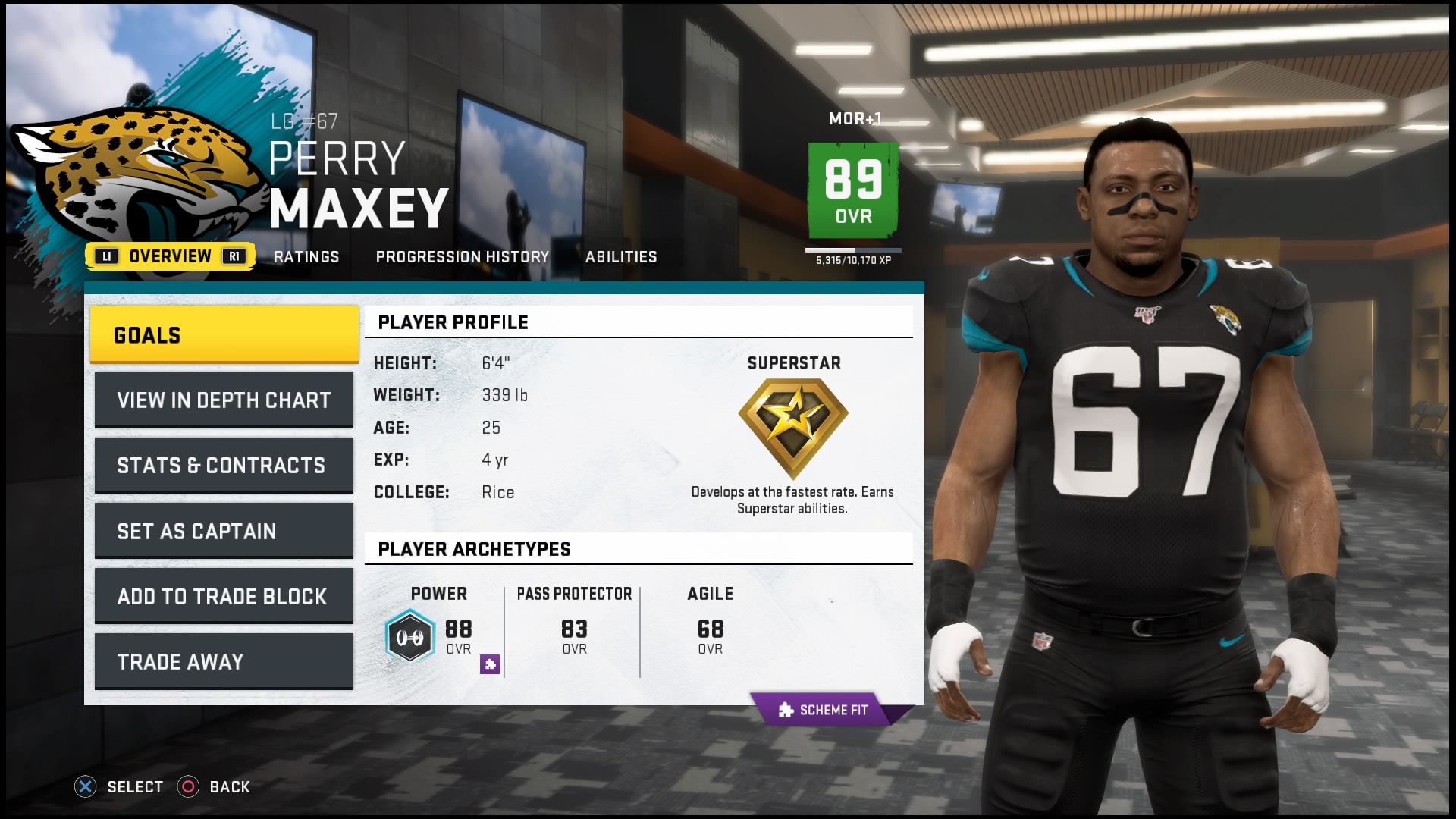 The first guy we are looking at is 88 overall LG Perry Maxey. 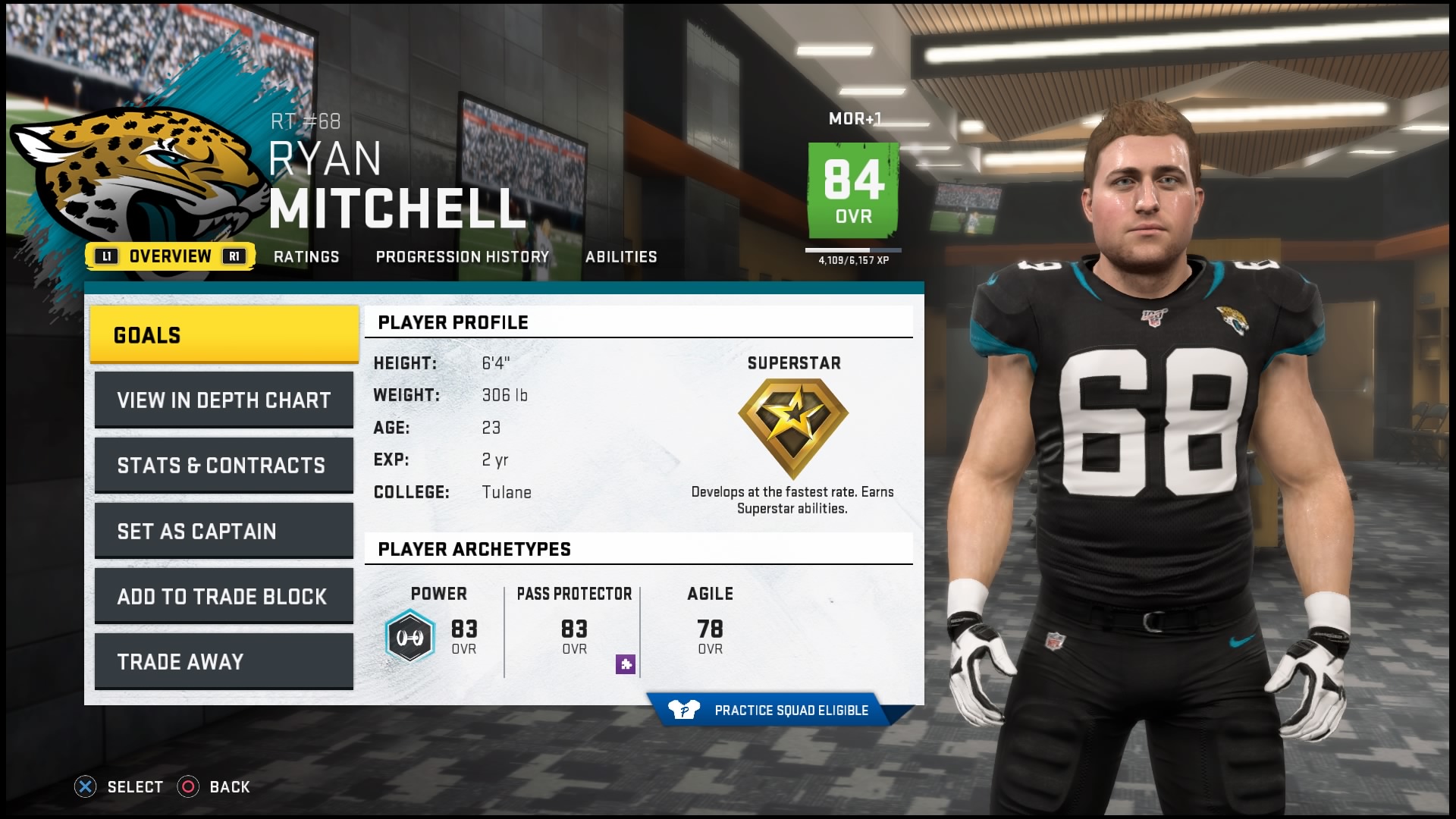 The second guy we are looking at is 83 overall RT Ryan Mitchell.

If I asked many of you which player you would most want to trade for (assuming they are the same age and development), a lot of people would say they would go for the guy who is rated an 88 overall instead of the guy rated 83 overall. After all, that is a 5 point difference.

While there may be some play style related arguments to be made for the 88 overall player, he is not the better player.

The ratings system in Madden is lying to you. For most people, the 83 overall player is significantly better than the 88 overall player. Lets take a look at their detailed attributes below.

Here is the breakdown for the 88 overall left guard. 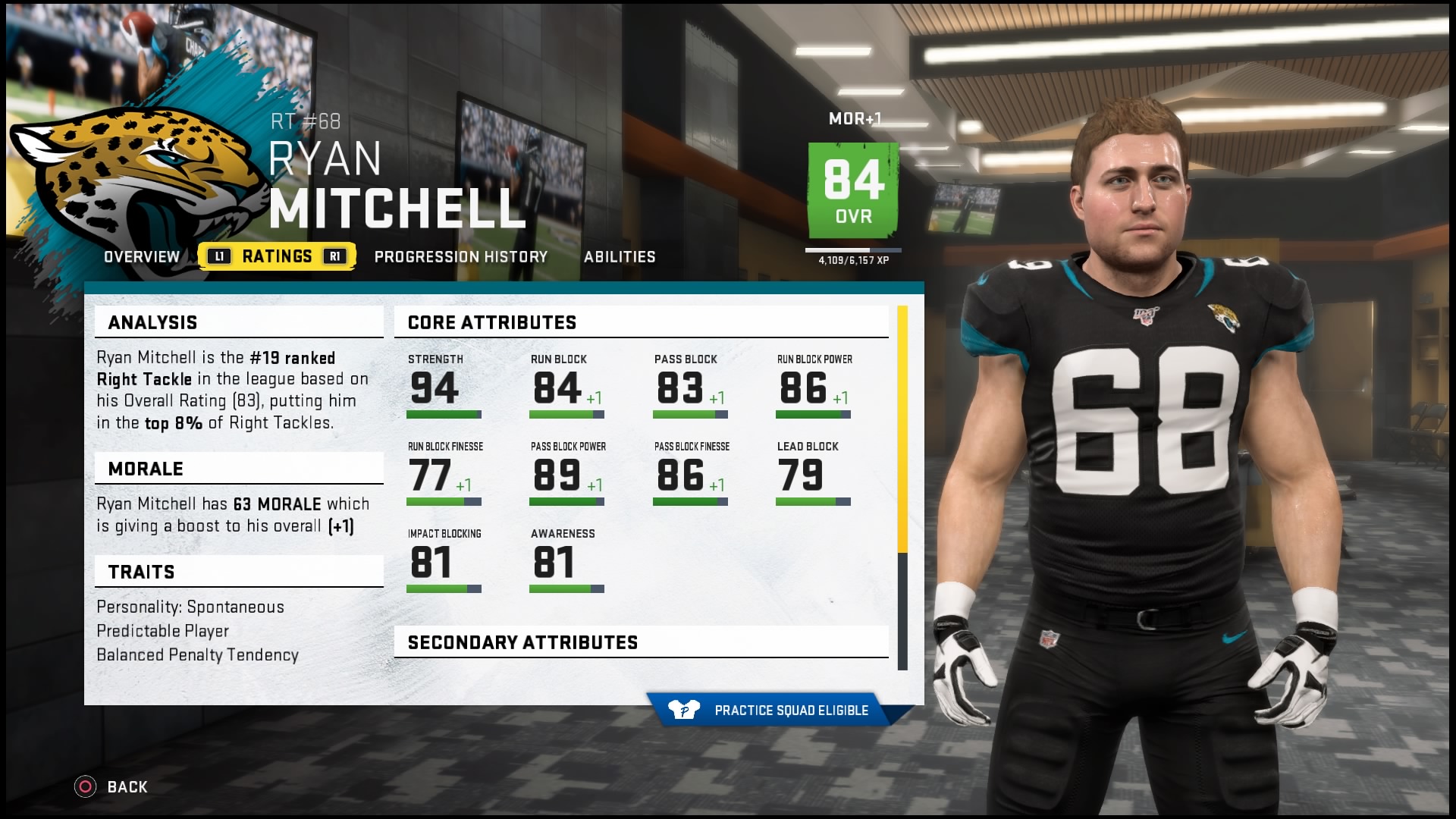 And here is the breakdown for the 83 overall right tackle.

If you are a player that only calls power run plays and nothing else, then sure the slight edge might go to the 88 overall player.

But if you do anything else, the right tackle that is an 83 overall is clearly the superior player.

Let’s look at the 2 offensive lineman again and focus on all 3 of their ratings instead of just the 1 EA Sports uses. 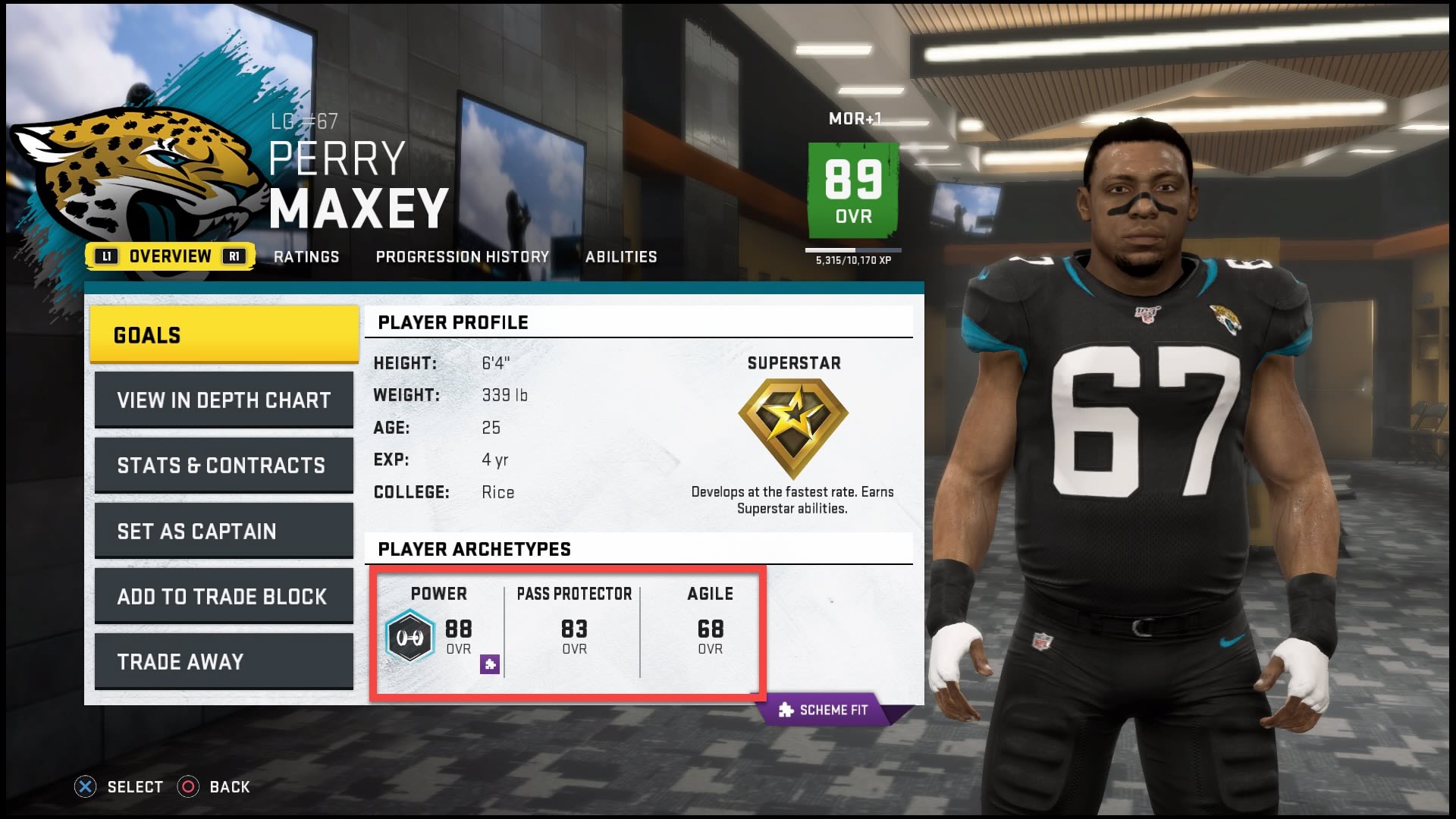 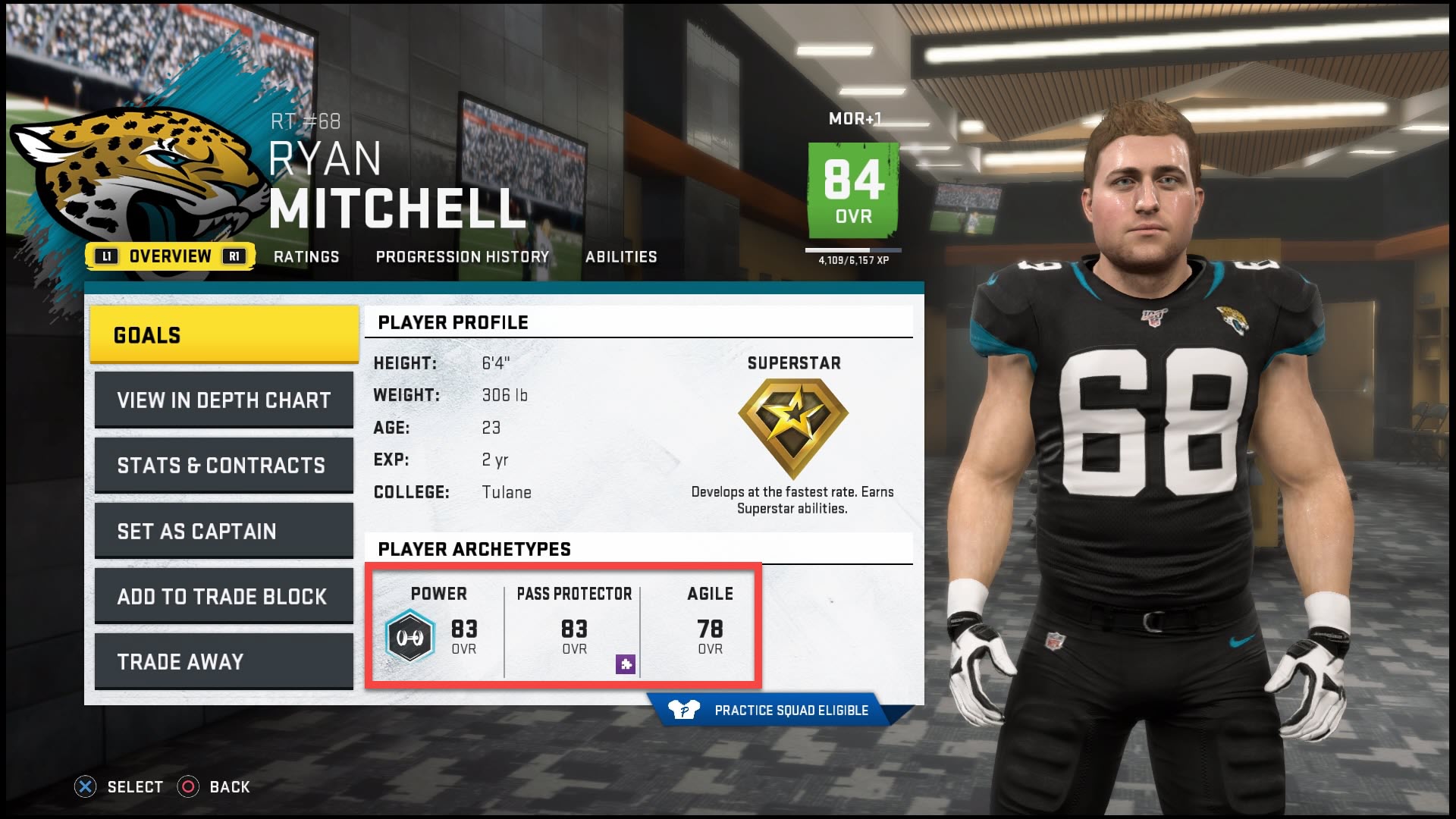 To get a much better overall rating, it makes sense to take an average of the 3. (The results still won’t be 100% mathematically correct but it is an easy way to get us to a more representative overall rating).

For the 2nd player, 83 Overall RT Ryan Mitchell, we do the same thing. His power rating is 83, his pass protector rating is 83 and his agile rating is 78. When we add those together it gives us a total of 244. We divide that number by 3 and get his true overall rating of 81.3333.

When applied to offensive lineman it might seem trivial but this same logic applies to every position in the game.

Some of those make sense. If you play exclusively zone defense the entire game, then you don’t care how low your cornerbacks’ man to man ratings are. All you care about is his zone defense so it is appropriate to rate cornerbacks this way.

Other positions like linebacker are the same way. If you have a run stopping linebacker, he will be forced to at times rush the passer or drop into pass coverage as well as stop the run. This is another case where it make a lot of sense to take the average of his ratings instead of just looking at the overall rating that Madden provides you.

By understanding this, you can make better trades and sign better players in free agency. If you are in an online franchise, the only things 90% of your league will look at is a player’s headline overall number, his age, his development, and his speed rating.

Taking a weighted average based approach will get you players who perform significantly better on the field instead of just looking good in your lineup.