A new title update to Madden 20 was released this morning which focused on adding new plays and formations into the NFL Live playbooks.

About half of the teams in the NFL got something new to added into their playbook.

In this article, we are going to look at in-game screenshots that show off what these new plays look like.

A week ago we covered a story where Chiefs wide receiver Tyreek Hill requested a specific play from the Super Bowl be added into Madden 20.

Here is how that play looks in-game. 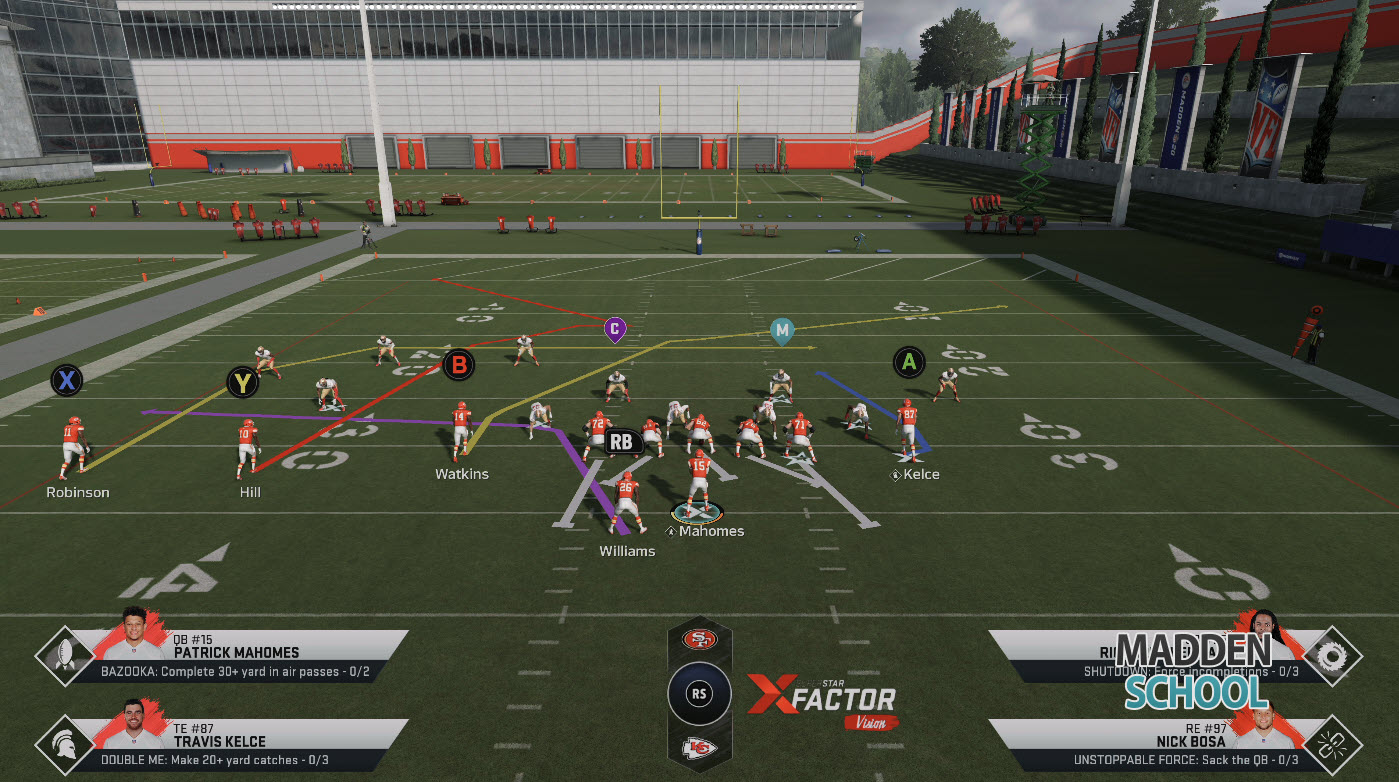 The first thing to notice with this play is that just judging by the play art, the route that Hill runs takes forever to develop.

If you can get a clean pocket for 8 seconds, it can be a very effective route but other than than that, it looks mostly useless.

This play was only added into the Kansas City Chiefs’ playbook.

The other Super Bowl team, the San Francisco 49ers got a few updates too. They got Singleback Deuce Close – PA Boot Corner Post and I-Form Pro – PA TE Screen.

Both of these plays are specific to the 49ers playbook. You can check them out below. 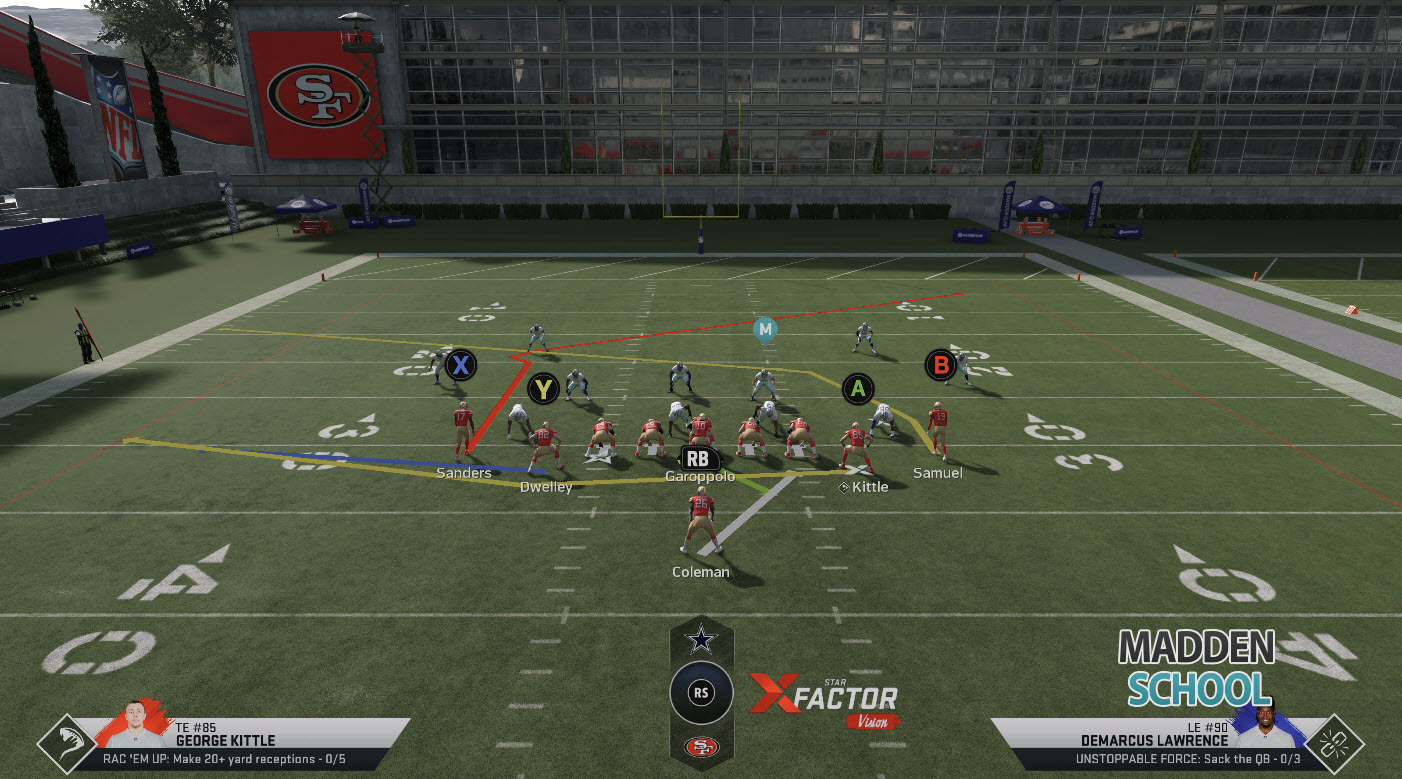 Singleback Deuce Close – PA Boot Corner Post looks like it could be a really fun and effective play from first glance.

You have a crossing route and a cool Corner Post roure from your 2 wide receivers and then your tight ends run a concept that has become popular in the NFL the last few years where one tight end comes across the formation and clears out a flat defender while your other tight end runs a delayed route underneath. 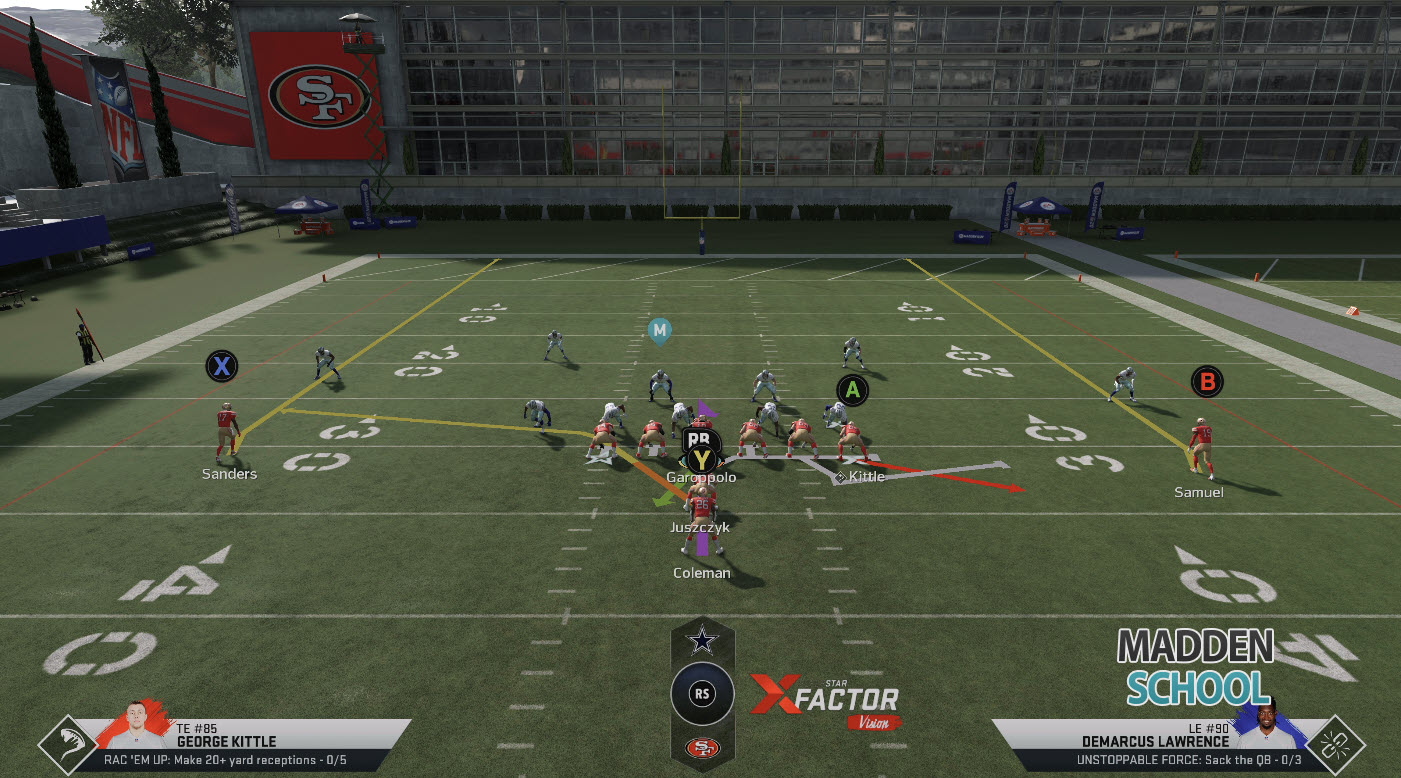 The I-Form Pro – PA TE Screen play looks like a cool concept but playaction screen plays have never been all that good in Madden just because you will often get sacked before you are able to get the throw off.

Even so, it is a welcome addition to the 49ers playbook. 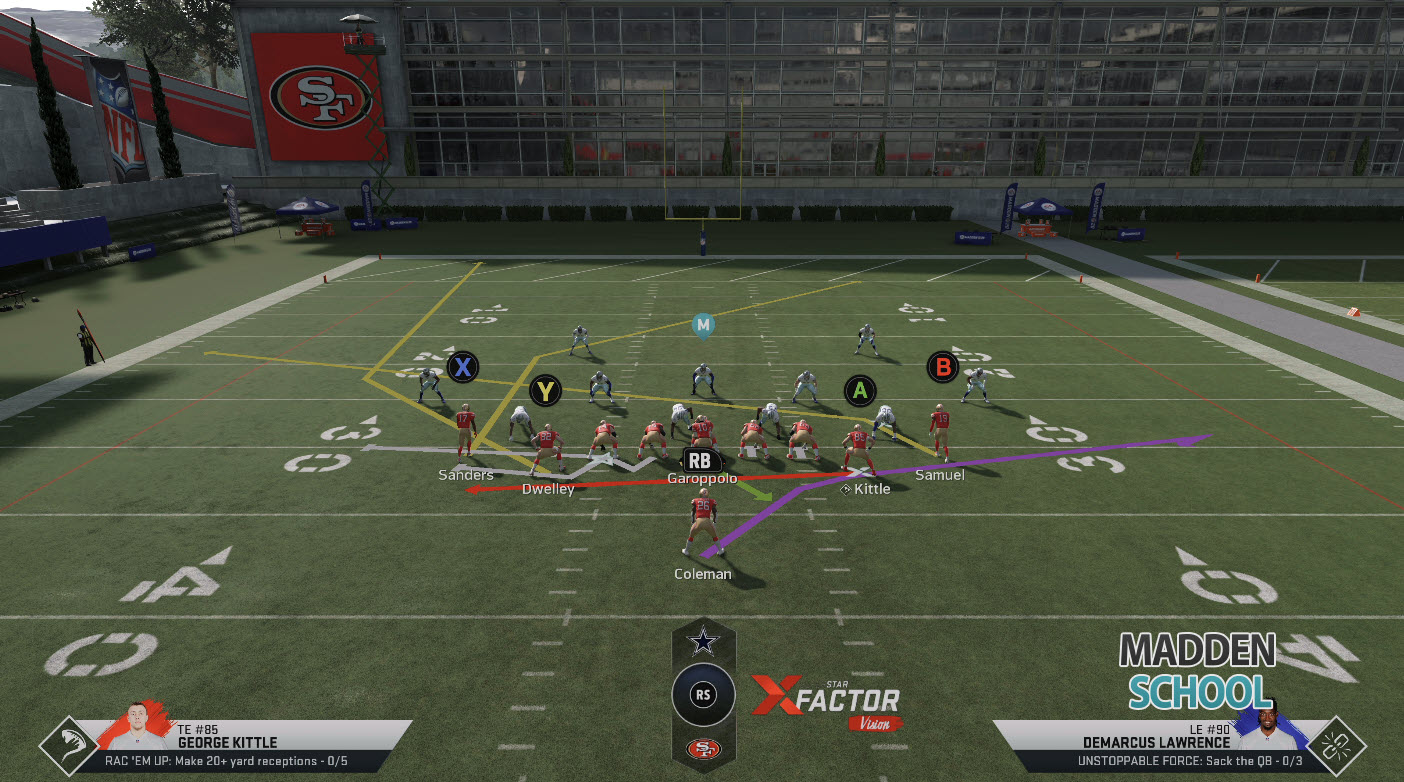 It can be found in the following playbooks: 49ers, Broncos, Bengals, Falcons, Panthers, Rams, Seahawks, and Titans.

The Buccanneers and Vikings also received a new play. This one is called Singleback Wing Slot – PA Y Screen.

It looks like EA Sports really had a focus on tight end screen plays in this update.

There were also some new formations added into playbooks.

The Browns playbook now has Far Pro. You can check out the plays below. 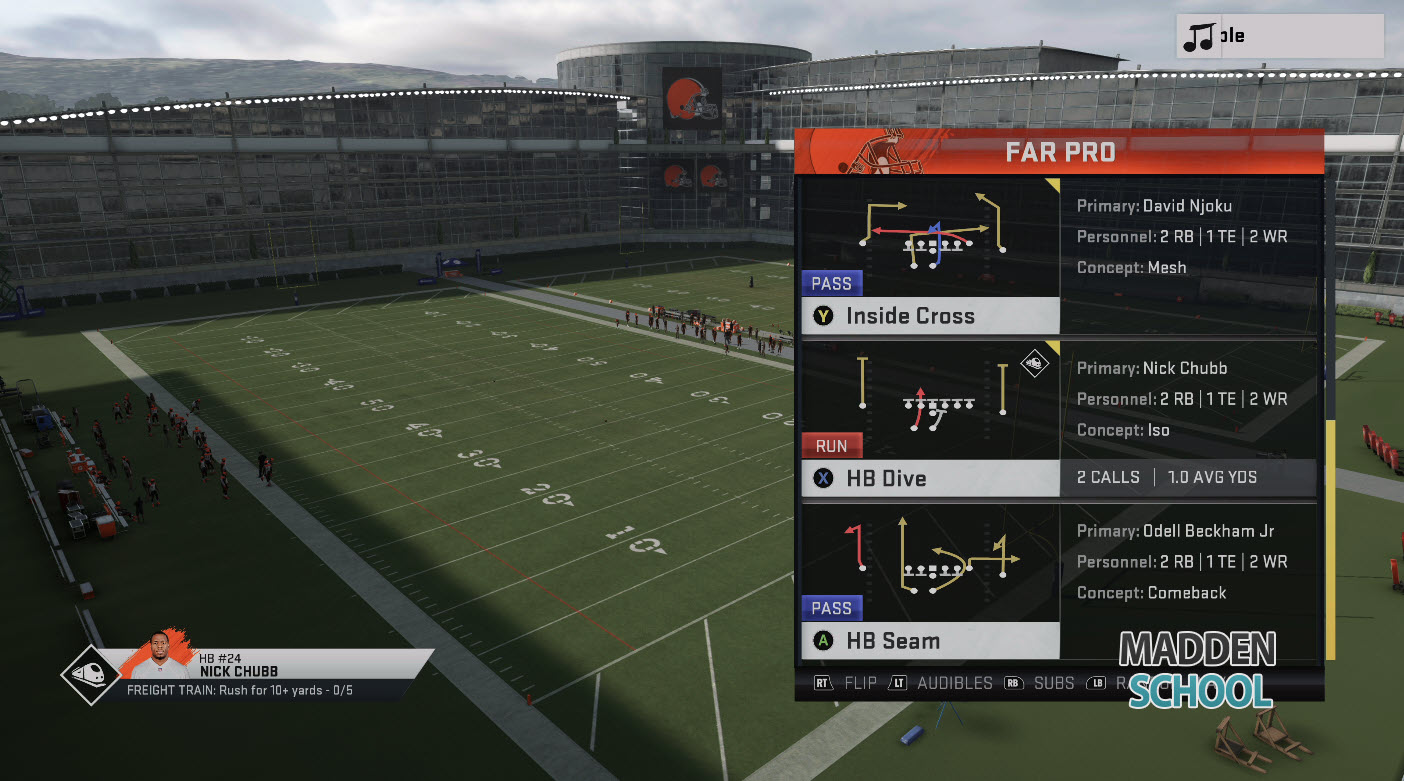 There are only 6 plays in the formation and they look pretty similar to what you would find in the West Coast Playbook.

The first 3 plays are: Inside Cross, HB Dive, and HB Seam.

The other 3 plays are: Slants, FB Dive, and Hank.

All in all definitely a cool formation to try out. 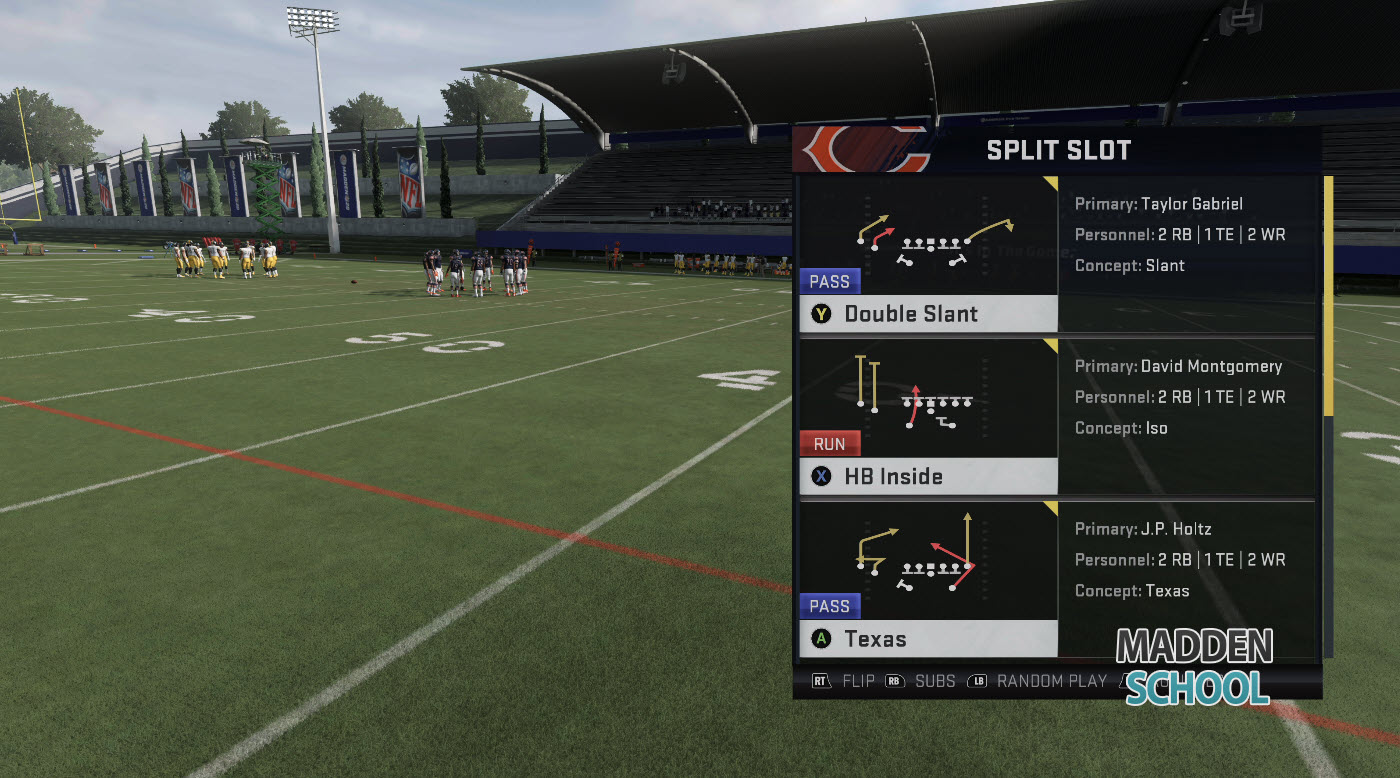 There are only 6 plays in this formation as well.

They are: Double Slant, HB Inside, and Texas. 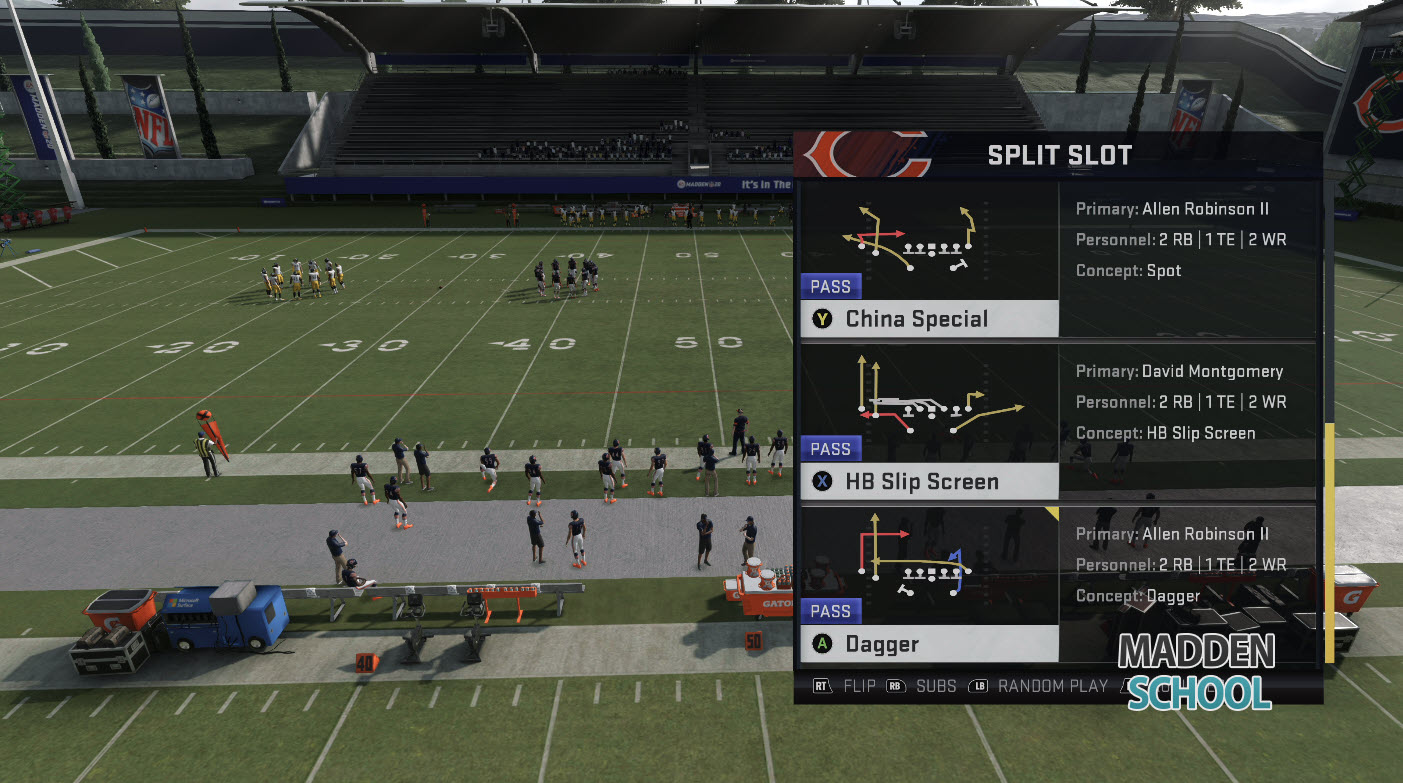 The other 3 plays are: China Special, HB Slip Screen, and Dagger.

Give it a try! It has been a while since an undercenter Split Backs formation has been in Madden.

The coolest new formation added to defense is called Quarter Over Load.

It has 6 plays to call in obvious passing situations and it can be found in the Buccanners, Cardinals, Ravens, and Titans defensive playbooks. 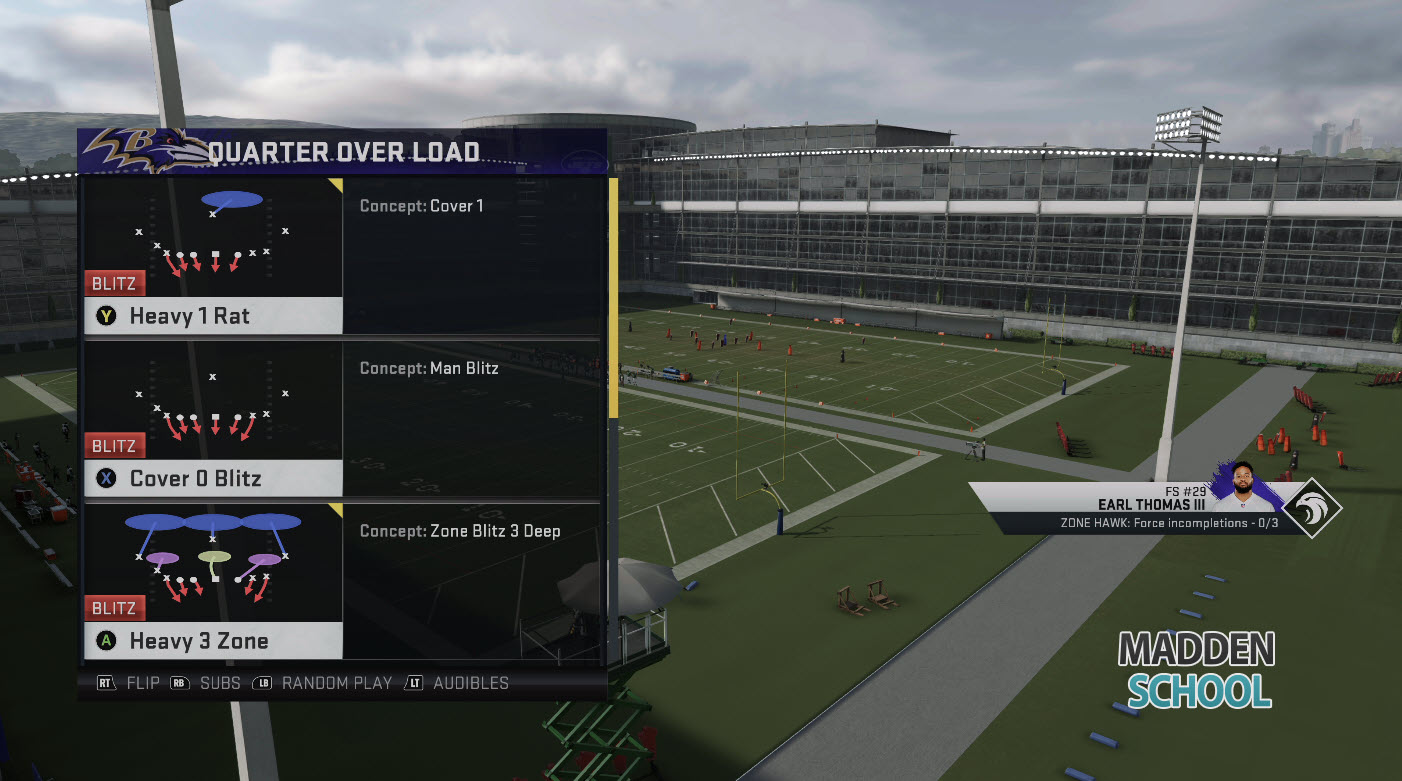 You can see that all of the plays bring heavy pressure off of the edge. 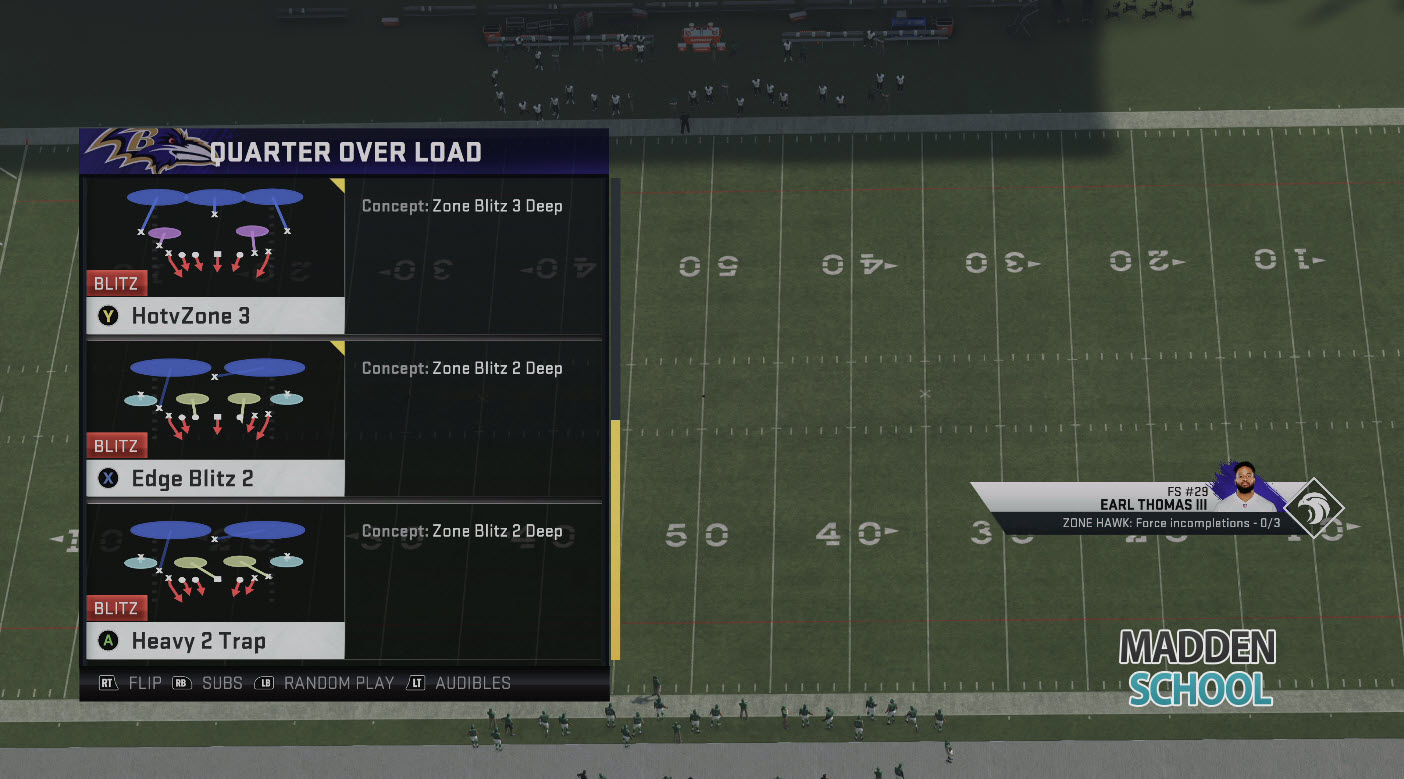 The next 3 plays are called HotVZone 3, Edge Blitz 2, Heavy 2 Trap.

One thing that jumps out right away from some of these plays is that the slot cornerback on the left plays a deep half zone which is incredibly unique.

This could be one of the best pass rushing formations in Madden 20. 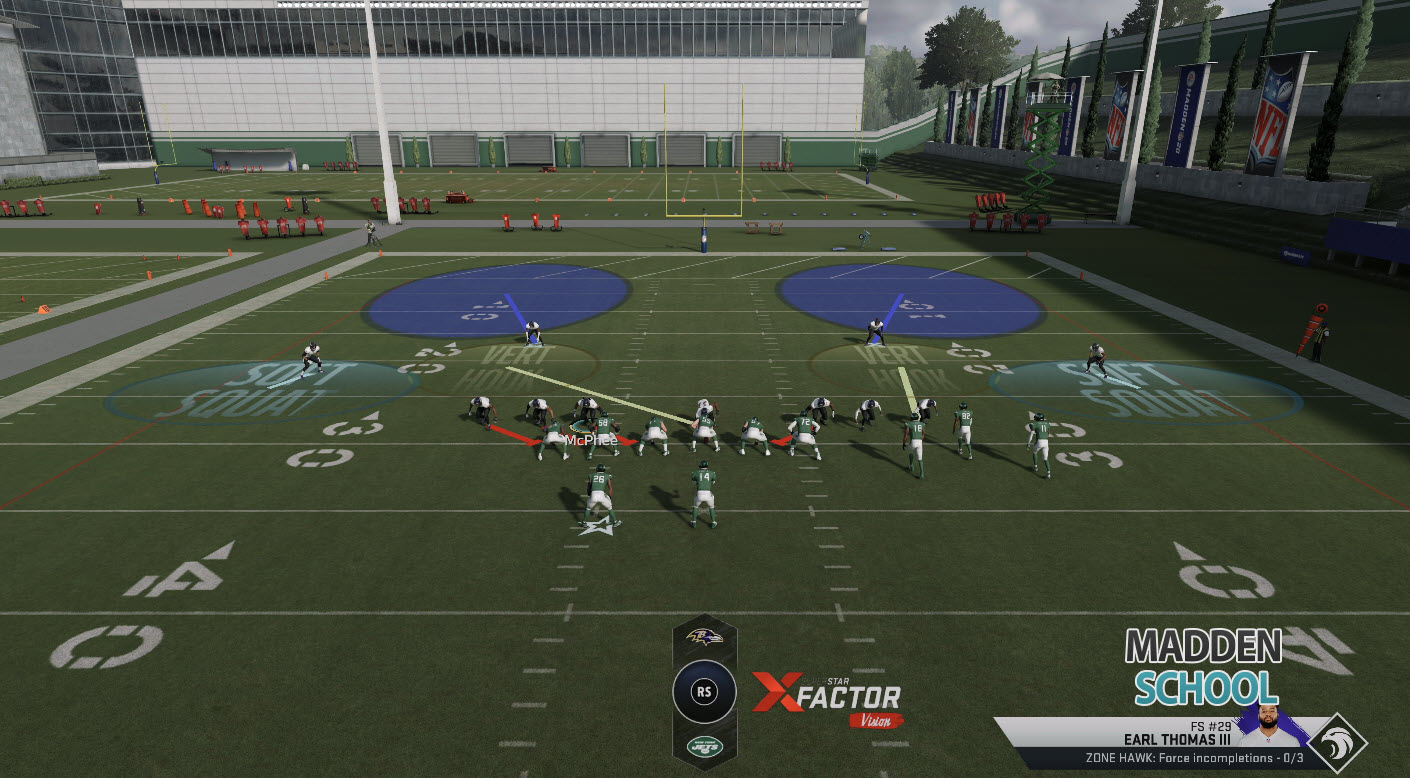 The screenshot above shows what the Quarter Over Load formation looks like on the field (instead of just the play art).

Another defensive formation added to the game is called Dime Rush. It is only found in the Eagles, Jaguars, and Redskins playbooks.

There are 15 plays in the formation but nothing all that new. The main different between this formation and Dime Nomal is that the pass rusher on the left side of the screen stands up. 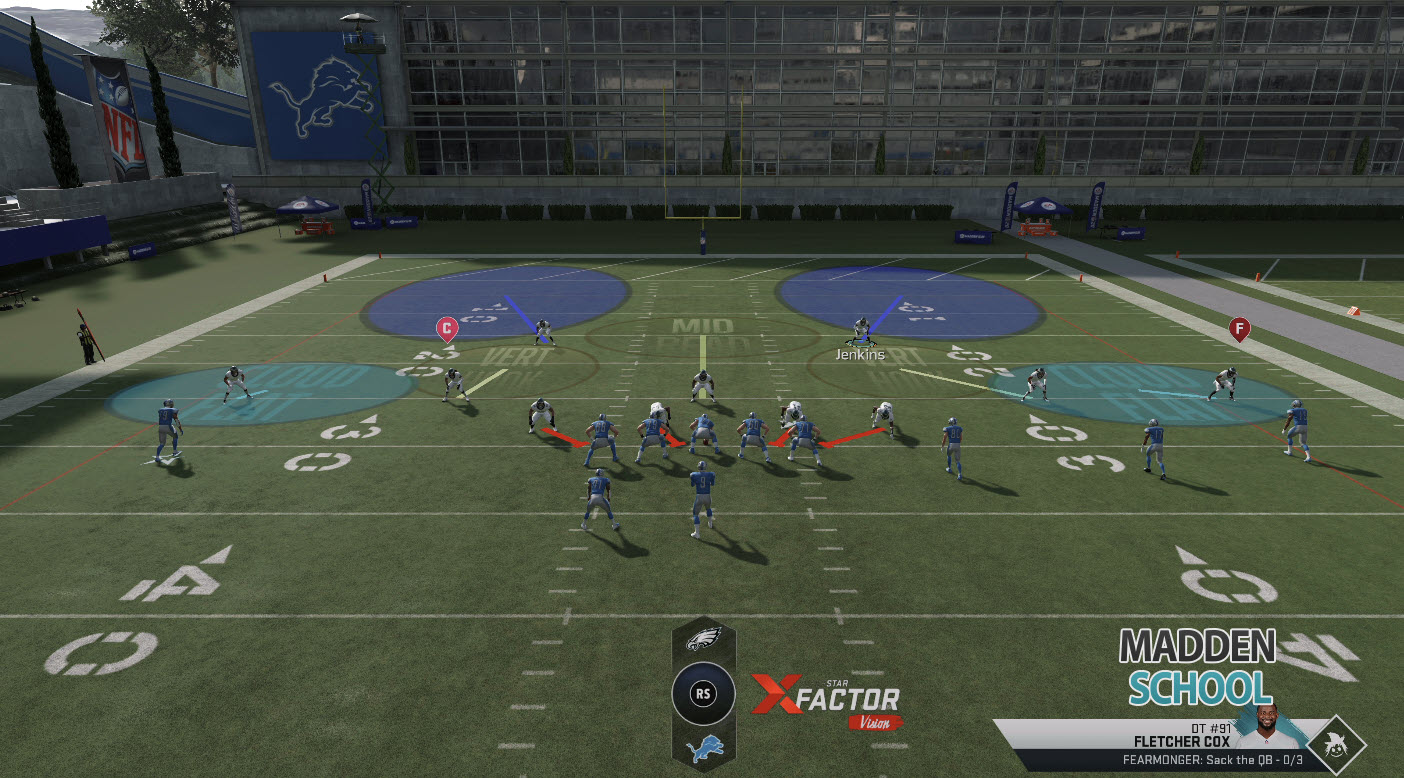 The screenshot above shows what the Dime Rush formation looks like on the field.

The final defensive update to note is that a previously added 4-3 Even 6-1 defensive formation has been added to the Broncos and Seahawks playbooks. 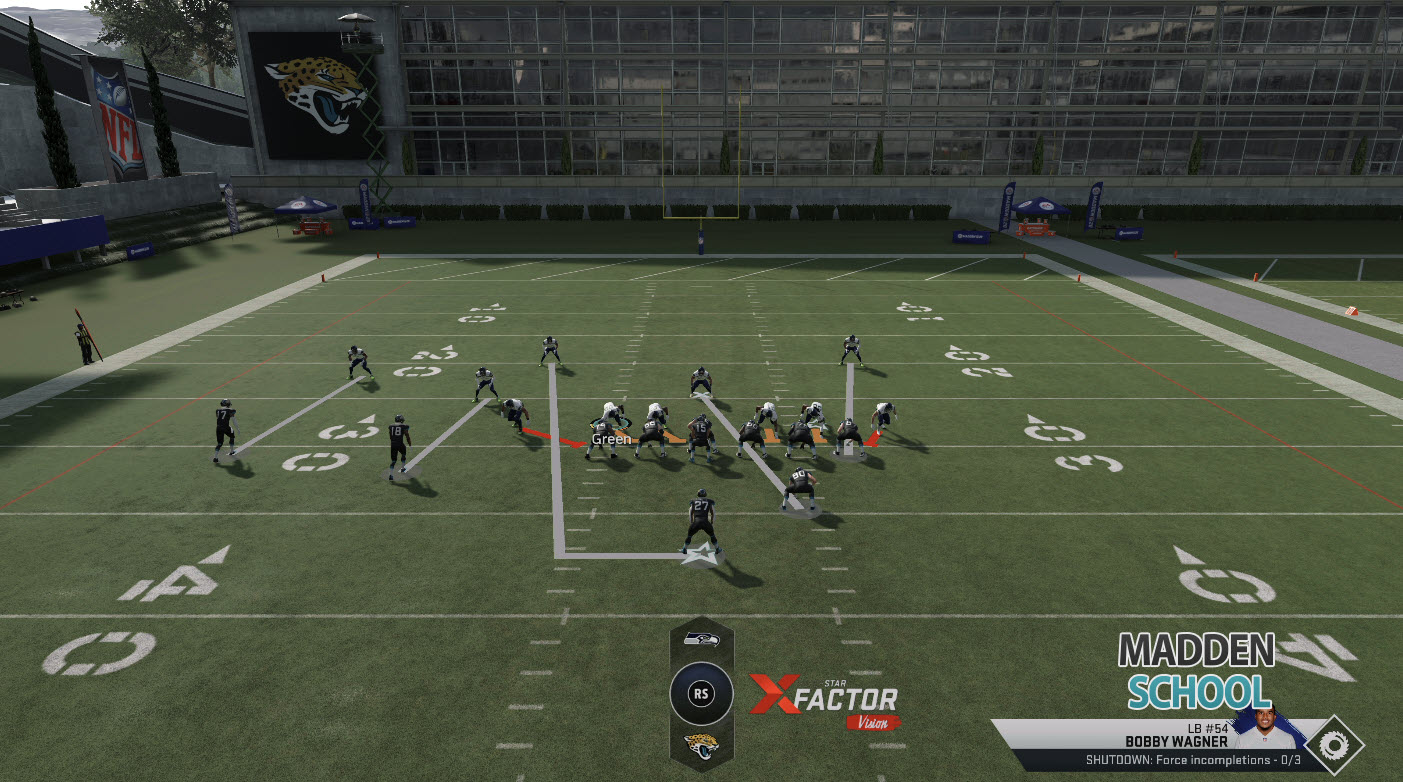 The screenshot above shows off what the 4-3 Even 6-1 formation looks like on the field.

Remember to use these plays, you must enable NFL Live playbook either in the main setting menu or on the playbook select screen right before you enter a game.

Which new plays and formations are you most excited about using? Let us know in the comments section!

are these plays available for custom playbooks?

They are not available in custom playbooks

Not in this updated.

I really want play calls from the headset. Even if Its Formation Set Play all numerical like 436. or say Formation 4 Set 3 Play 6. I want that for offense and defense in all areas of the game. especially MUT. Also I think it’s time they fixed press. players shouldn’t have to tinker with their safeties to get their corners to press properly. finally I want to see play creation. give me a route tree let me go from there. same with defense . I want to play a custom defense. also its BS if your team doesn’t have say an LE that you have to keep an LE from another team with you. If you assign an OLB to play that position as a speed rusher MUT should accept that. as long as a player is reassigned to that position .