Note: Our Madden 23 Scouting/Draft Guide Can Be Found Here

One of the most important things in any draft is to try to get rookies with development traits. Star dev, Superstar dev, and Superstar X-Factor players progress much faster than Normal development players.

It is fair to say that it’s crucial to draft players with a good development trait.

In Madden 21, it is much less common to draft a player with a Star, Superstar, or SSX trait than in previous Madden games. In any given computer generated draft, there will usually be somewhere around 3-5 superstar players and 10 star players. Every now and then there may be a Superstar X-Factor player. The rest will have normal development.

A typical draft has 450 players in it so with 15 or so players getting development traits, you’ll have about a 3% chance of randomly drafting a guy who isn’t normal.

While our extensive testing didn’t reveal too many sure-fire ways to always draft a player with a development trait, it did reveal how to get a much higher probability.

To do this, each week we looked in the “News” tab and scrolled to “Draft Stories” like in the image below. 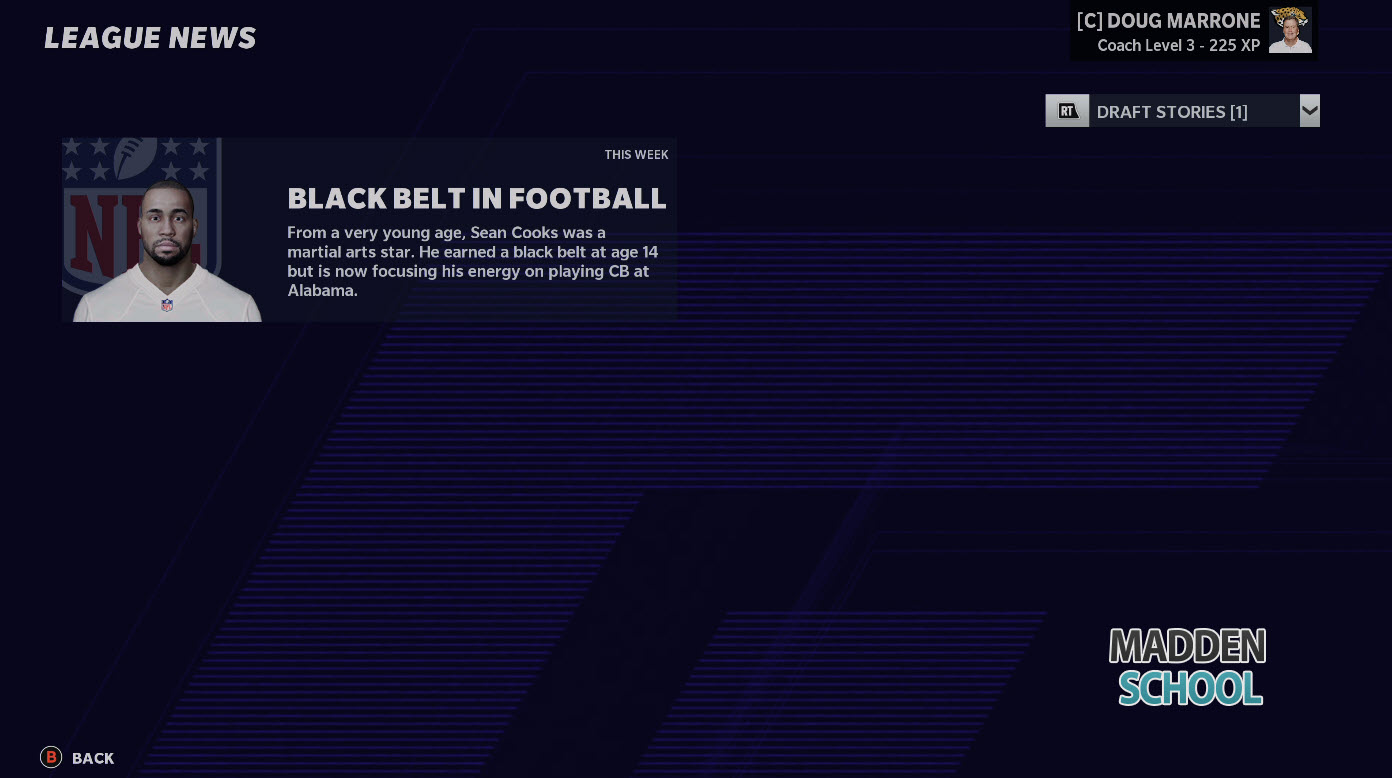 Note: This only works for computer generated draft classes that haven’t been edited. If you are using a custom draft class, these stories won’t appear.

By monitoring these stories, we can get a much higher chance of drafting a rookie with a development trait.

After going through 10+ drafts and marking down what each story said and then noting what development trait the player who the story was about got, we found a few things.

First, in weeks 1-3 (before the scouting process even is available) there will often be stories about players. If an article is written about them, those players have about a 67% chance of getting at least star dev of better.

It isn’t guaranteed and you will still draft normal dev players but you are increasing your chances from around 3% to 67%.

When we looked at the results for every player who had a story written about him, it came out to around a 40% chance that a player would have a development trait.

“Terrence Johns showing he can handle the physical demands of a full season. Incredible game for the star LB.”

“Looks like offensive lines have figured out how to solve Johnny Cohen. Not a good sign for his draft stock” 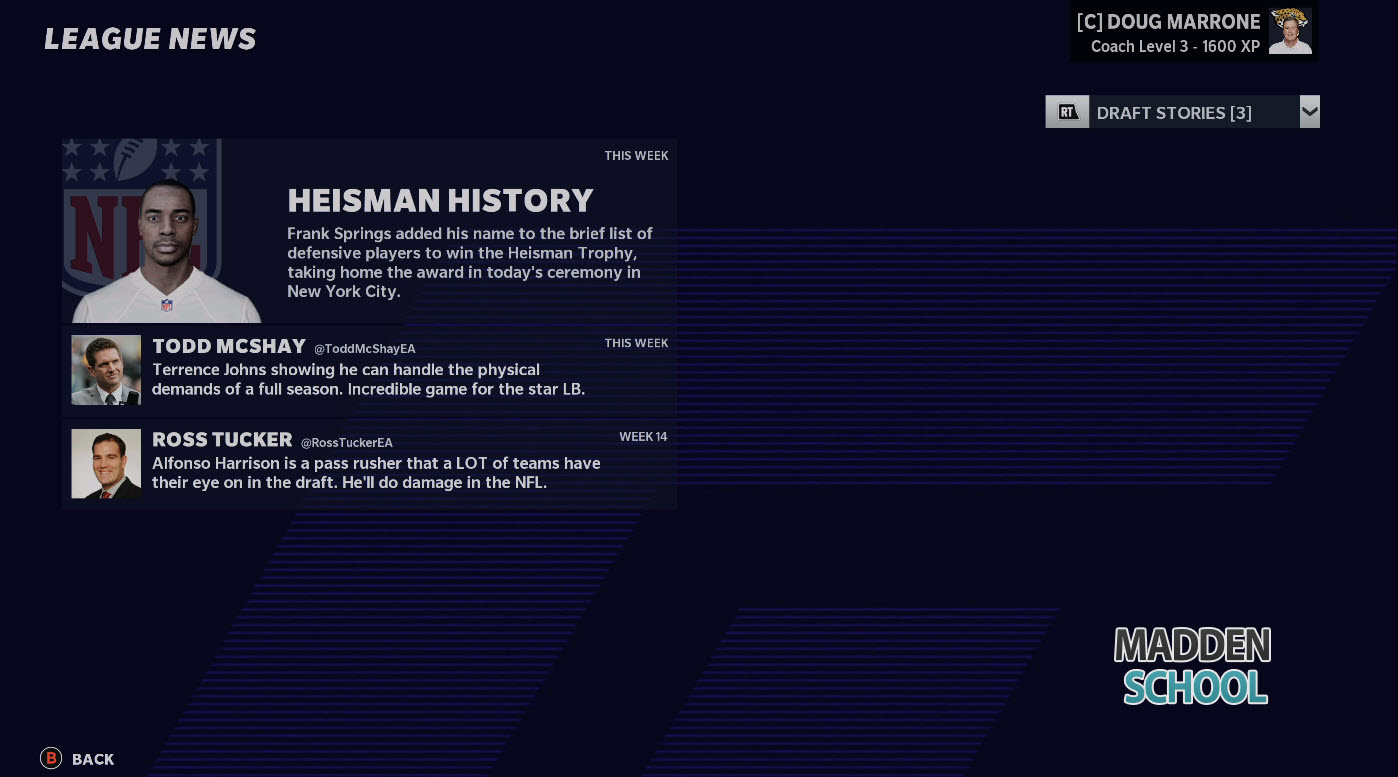 There are a couple specific stories you will want to note.

We already talked about the stories from week 1 to week 3 giving you a solid shot at a development trait. Another one to be very aware of is in Week 15, the Heisman Trohpy comes out.

Make a note of who won it because in every single one of our tests, the guy who won the Heisman Trophy came in with at least a Star dev trait, and more often than not it was a Superstar trait.

If a player has a story written about him in those stages, you have about a 50/50 shot of that player having a development trait. 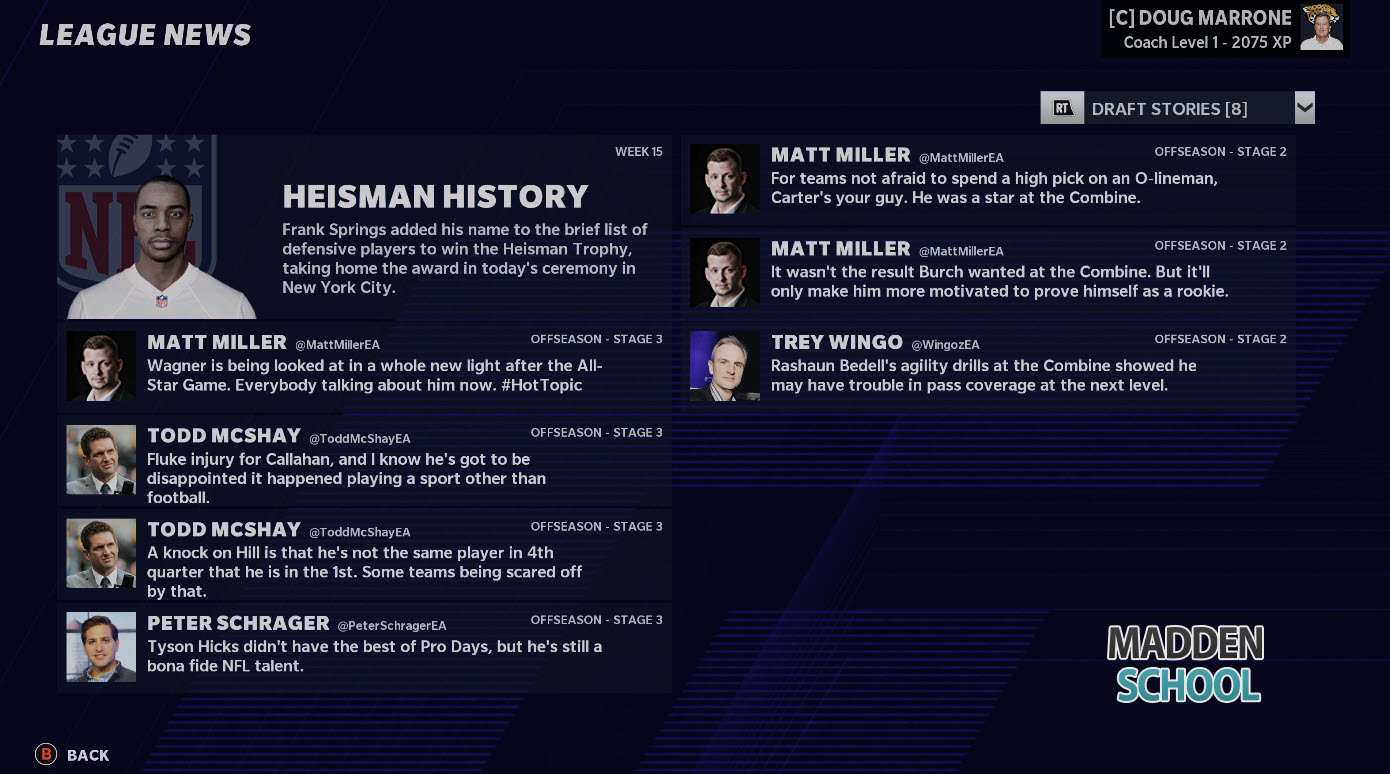 There are a couple of other things that may be of use to you but aren’t guaranteed.

In the test drafts, if the tweet or story contains a word with all capital letters, it was extremely likely that player would have a development trait.

For example, “Alfonso Harrison is a pass rusher that a LOT of teams have their eye on in the draft. He’ll do damage in the NFL.”

Or, “Bryan Whitehead looked awesome against Damien Torrence at the All-Star game. And that says a LOT.”

Notice how the word, “LOT” is capitalized. It can also appear with a word like “GOT.” Saying something like, “Tony Marshall continues to amaze. DBs play such a big role in the NFL, he’s GOT to go high in the #NFLDRAFT”

This isn’t a guaranteed thing but it heavily increases your odds.

Another story to look for that often has positive results is when a player “is giving up football.” This is generally a positive story that will lead to a development trait.

For example, “Word is John Bennett has serious business aspirations, so much so that he’s giving up football.”

One common draft story that had led to development traits in the past was the guy who won the All-Star Game MVP. You can still get a development trait with this but it is far from guaranteed and much less common than before

If you missed the first 3 parts of our Madden 21 franchise scouting guide, you will definitely want to check them out.