If you haven’ t yet checked out part 1 and part 2 of our Madden 21 franchise scouting guide, I’d recommend doing so before (or after) you read this post.

In part 1, we went over how to tell what speed, acceleratation, strength, jump, and other physical ratings a prospect will get.

And in part 2, we covered position based grades and how to use them to tell what individual ratings a prospect will end up with.

Today in part 3, we are going over how to tell what overall rating any player in the draft will have.

In order to do that, we have to scout a player and get his “Talent” rating like in the image below. 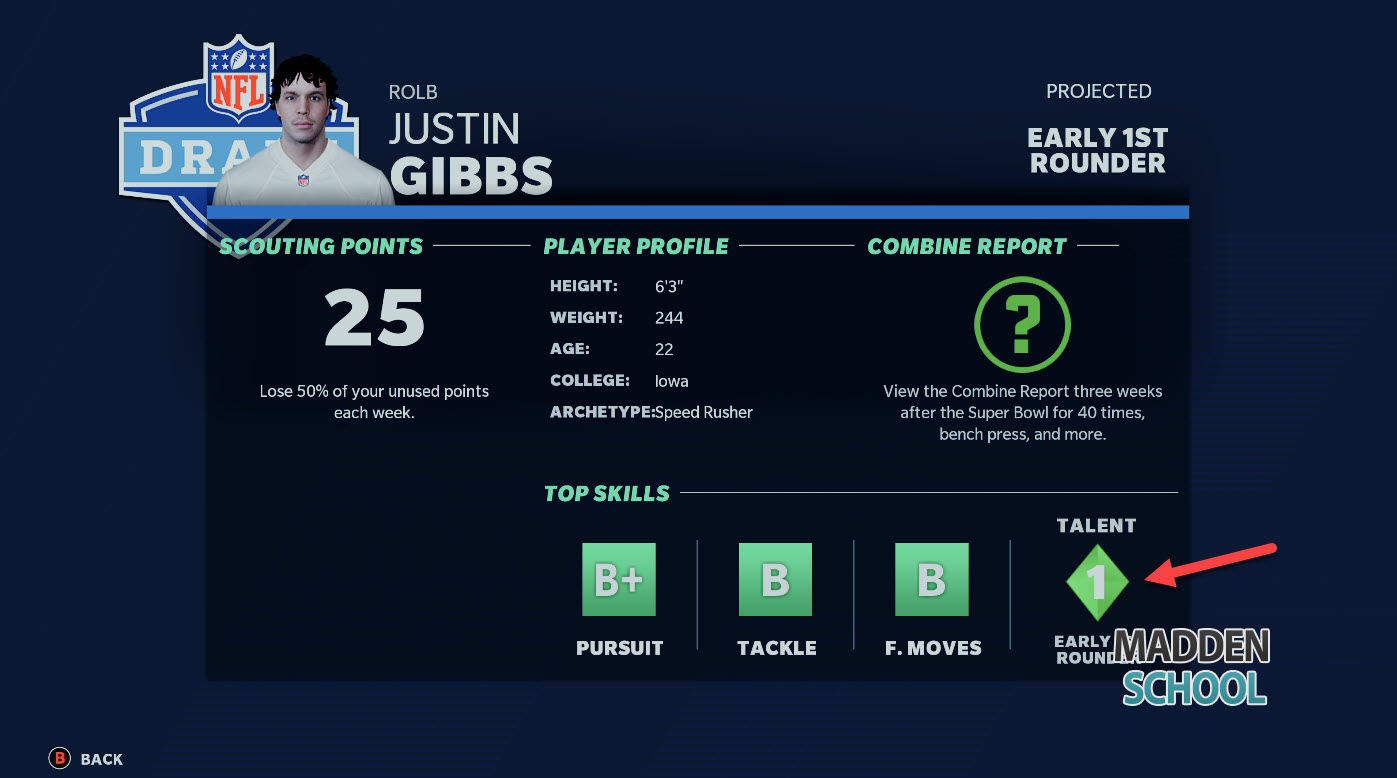 This is the main thing to look at in order to determine a player’s overall rating.

Basically the talent rating that is revealed to you after you scout all 3 individual ratings will give you an incredibly tight range for what overall a player will be.

Note: Projected round means nothing for overall rating. All that matters is the “Talent” rating.

Let’s go over this all in more detail below!

The table above shows what each “talent” rating corresponds to with a player’s in-game overall rating.

The way we did this analysis is we went through a bunch of drafts, scouted the players, and then marked down what their overall ratings were. A pattern emerged pretty quickly and the results were pretty straightforward.

One big takeaway from this research is that there really isn’t a huge difference between the lower round grades.

A 3rd round pick to a 7th round pick seems like a huge drop off but it really is only 4 points of overall rating.

Using our Madden 21 progression and XP calculator, for a 64 overall, 22 year old rookie with normal development, it only costs about 4000 XP per skill point (much less if he is star or superstar).

That really isn’t much of a difference at all and can easily be made up.

The best actionable advice for this is to weigh combine grades and positional grades more heavily than the overall grades.

There is only a 2 point overall difference between them so it would often make more sense to instead draft the lower rated player that has a higher positional grade in an attribute that matters a lot like throw power even though Madden is telling you that he is the worse prospect.

All of this is to say to not weigh these “talent” grades too heavily in your calculation of who to draft. It is incredibly helpful to have the information but to really draft well, you’ll need to combine this information with all of the other information revealed to you.

When you put all 3 parts of our scouting guide together you’ll be able to take any prospect you scouted and have a very good idea of that player’s overall rating, speed, strength, acceleration, agility, change of direction, jump, and 3 of his best positional ratings.

Once you have all that information, it is much easier to make decisions on who you should draft.

I hate you guys. I’ve been using this knowledge, without the extensive test, that you presented in these 3 articles to dominate my draft for years. You gonna make it harder for me now. Good work, tho.

Great content with all 3 parts. Have you guys done any work as far as draft prospects and “League News” “Draft Stories” background? For example, martial arts background, head coaches son, breaks school interception record, Heisman winner, kicked off team etc… I usually write each one down during my franchise season and haven’t been able to come to much of a conclusion, whereas past season were much easier finding star and super star dev traits and higher overalls. I feel like finding more information on these storylines would be a great way to wrap up your Scouting Guide series! Any feedback would be much appreciated!

It is something we are looking into but we haven’t found any reliable indicators on that just yet.

Heisman Trophy Winners seem to have always hidden development since draft stories are able to change the pre-determined development trait (in week 14, the future Heisman winner might have normal DEV, in week 15 he might have Star/Superstar/SSX due to his draft story). The story about a family background in week 3 for any player also seems to be a high indicator for hidden DEV. Whereas stories within the regular season seem to be less important (apart from family in week 3 and Heisman in week 15), you might focus on draft stories in the Super Bowl week and in the Offseason. A great All-Star Game might also change the pre-determined DEV. In some drafts I had changes from normal to star and from normal to superstar due to this news. Offseason stories mostly change the OVR of this player but they might also change the DEV (however not as consistent as Heisman and great All-Star Game do). For example: in some drafts there were DEV changes for “good Pro Day” and also for “bad Pro Day”, in other drafts there were no changes for Pro Day or All Star Games at all. In conclusion, news can’t be seen as a sure indicator for hidden DEV (except of Heisman trophy winner) but they significantly increase the chance of hidden DEV players since they are able to change the OVR and pre-determined DEV of this player in comparison to his ratings before the news. So it might be interesting to follow family stories, Heisman, All Star and Offseason news.

From my experience playing this game and doing a lot of franchise stuff, “stories” will give you a slightly higher chance at having the player have a hidden dev, however it is not guaranteed, but if you have 2 QB’s in the draft class and one had a story and the other didn’t the guy with the story has a slight higher chance of having the hidden dev, at least this is from my experience.

This is awesome, thanks for all the work. Do you guys have any idea what the green vs red true talent diamond means?

Thanks man. The green/red diamonds make no impact whatsoever