Note: Our Madden 23 Scouting/Draft Guide Can Be Found Here

In part 1 of our Madden 21 scouting guide, we went over how to know what physical ratings like speed, strength, jump, etc a rookie would get just by looking at their combine grades.

In today’s part 2 of the series, we are looking at the skill specific grades for positions like throw power, juke move, man coverage, and everything else. In this article we’ll walk you through how those letter grades correspond to actual ratings in Madden 21 franchise mode.

There is one quick thing to note before we get started. The letter grades given when you scout are not position specific. That means that a B+ spin move rating will fall in the same range of numbers as a B+ press coverage, or a B+ kick accuracy, or a B+ spec catch rating.

It doesn’t matter what category you get a B+ rating in, you can expect the same range of possible ratings.

The scouting system is pretty simple really. When you scout a player, his top 3 (position specific) ratings are revealed to you using letter grades.

We did a ton of busy work and math to figure out what each letter grade means and what ratings it will correspond with. You can check that out below.

It is a pretty straight forward system but there are some subtleties to it.

Remember that the scouting system only reveals the top 3 position specific ratings. That is all of the information you will get but you can use those ratings to figure out more information.

For example, let’s say you scout a WR with A- Catch, A- Catch In Traffic, and A- Spectacular Catch. You’ll know that all 3 of those ratings will be somewhere between 82-85. You’ll also know that none of the route running attributes, or release attribute will be higher than 82-85.

The other thing worth noting is the position in which the grades come up. So the example above with an A- grade in all 3 catching abilities is from a player in a created draft class. 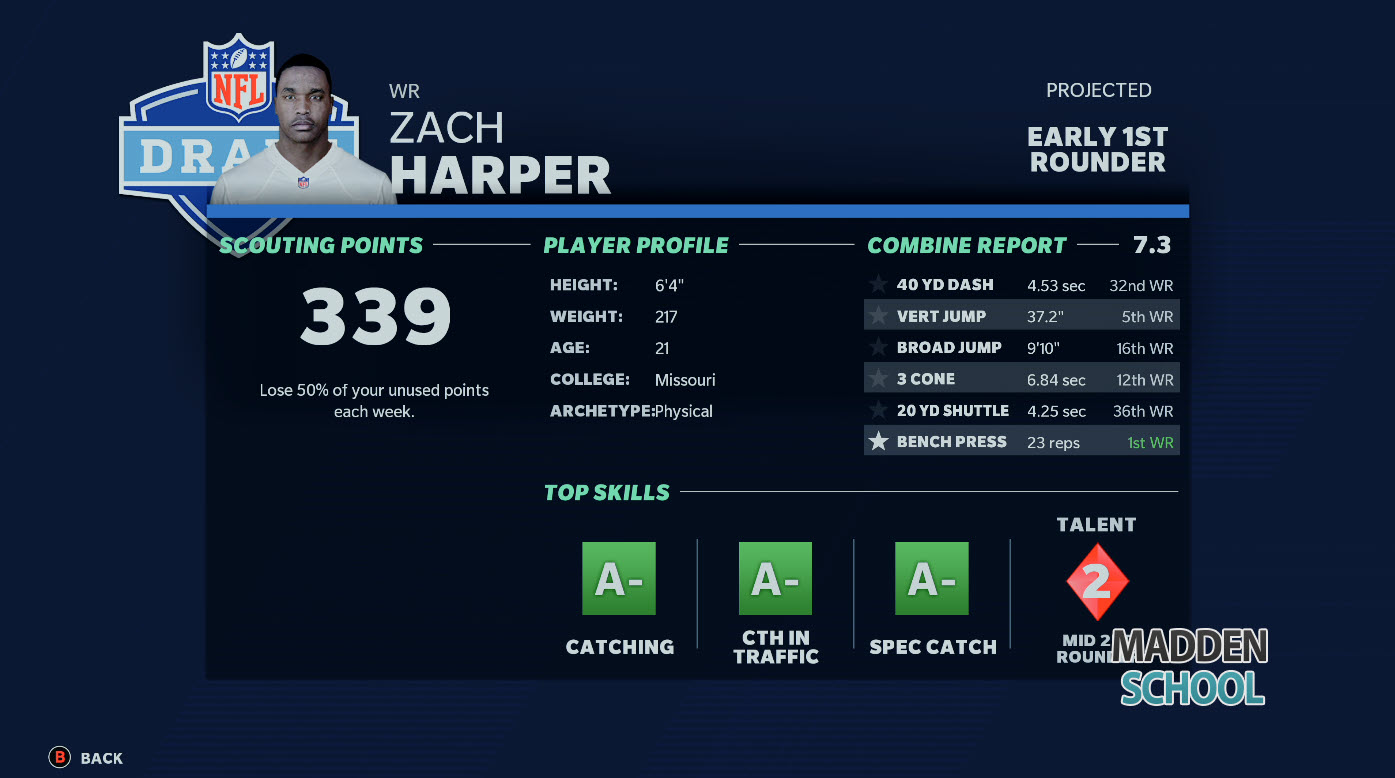 You can see that A- catching comes first, A- catch in traffic comes second, and A- spec catch comes 3rd.

We can see that this player ends up with 84 catch, 82 catch in traffic, and 82 spectacular catch. You can also somewhat see that his route running ratings are in the 70s.

This aligns perfectly with what we expected.

These kinds of situations where 2 or 3 of the letter grades are exactly the same can be fairly common and provides really useful information.

And remember, we can easily find out this player’s speed, acceleration, agility, change of direction, jump, and strength ratings by using part 1 of the Madden 21 scouting guide.

With all of this information, you are on your way to knowing just about everything you could possibly need to know about a player you are drafting.

One of the only things left to figure out is a player’s overall rating using the information provided to you in the scouting process. That will be in part 3 which we will go over in the next part of this series so stay tuned for that!