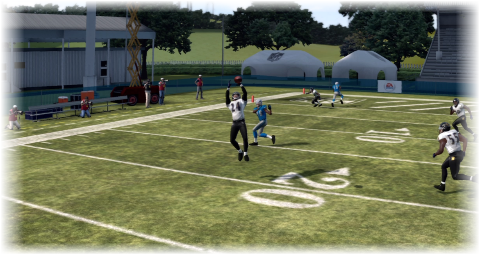 Now that we’ve covered the new offensive hot routes that will be featured in Madden 25.  Now it is time to talk about a key defensive enhancement that EA Sports has corrected after years of getting it wrong.

In the past, the buzz zone (or the purple zone as many Madden gamers refer to it) has acted essentially like a flat zone or light blue zone.  This one little glitch created all sorts of problems on defense.  There would be times when you’d know exactly where the play was going but you still couldn’t stop it because of the inability of your virtual players to cover the zone that you instructed them to.  Those days appear to be over.

Defenders who you place in a purple zone will play it as they are instructed to in the NFL which is to drop to about 10-12 yards in order to cover the curl first and then proceed to cover the flat after they lock up anything at the deeper depth.

This improvement will allow us to create all sorts of different and unique defensive tips and schemes in Madden 25.  Look for zone defense to make a small comeback in popularity when Madden 25 is released on August 27th.