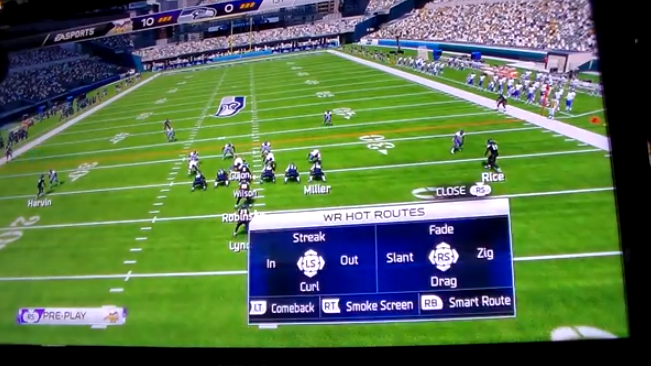 Most pro madden gamers know that in order to make   a true money play, you have to add your own adjustments to the stock plays that are found in each team’s playbook.  Hot routes allow you to tweak a play to your liking.  That is why it is such a huge deal that new hot routes were added to Madden 25.

Last year EA Sports took a giant step forward by adding in specific hot routes for running backs like the wheel route, flat route, and the block and release route.  Those will all still be in Madden 25 plus a fade route and an option route.

Additionally you will have the option to hot route any tight end or slot receiver to a flat route.  This may not sound like a big deal but that simple hot route can turn a relatively basic play into something that is much harder to stop.

Outside wide receivers will have the comeback and a smoke screen hot route to take the place of the block left and block right hot routes that used to be in their place.  I think we can all agree that it was fairly useless for 2 hot routes to be dedicated to blocking.

These new hot routes will allow us to come up with all sorts of new Madden 25 tips this year.  What new hot routes are you most excited about in Madden NFL 25?  Let us know in the comments section.