It is very hard (nearly impossible) to read whether the defense is in man or zone before the snap in Madden 13.  This is something that annoys a lot of people but in reality it adds to the realism of the game.  In the NFL, there is no real way to distinguish between man and zone pre-snap so the same should be done for the Madden game.  With that in mind though, we are going to show you a money play that works against both man and zone.  We will also provide a fairly simple way of detecting man or zone coverage right after you snap the ball.

Playbook: Bill Walsh (This is a new playbook added to Madden 13)

Madden-School.com Pro Tip: To differentiate between man and zone defense in this play, we need to focus on the cornerback on the left side of the screen.

This is how the cornerback lines up in man to man coverage.  He might also line up closer to the line of scrimmage but that doesn’t matter.

Once we drop back a few steps, you should notice that the cornerback is on the inside of the wide receiver.  Also notice how the cornerback is already almost to the left hash marks.  There is no zone in Madden 13 (or any other madden game for that matter) where the cornerback can play a zone like that in the middle of the field.  This should tell you automatically that it is man to man defense and you should immediately look to your tight end on his shallow corner route.

In the screenshot above, the defense is in a cover 2.  Notice where the cornerback on the left starts.  Again, it is irrelevant, it should just be used as a reference. 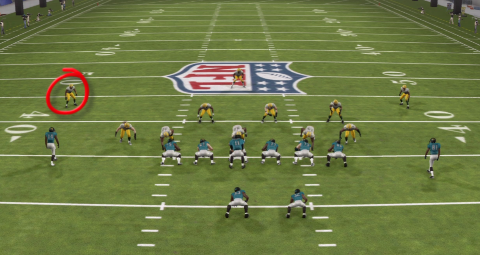 Lastly, we run the same play against a cover 3 defense.  Again you should check the cornerback’s positioning and use it as a reference for the next screenshot.

In a cover 3 defense, the cornerback drops back deep.  Again, he stays well to the outside of the wide receiver on the left which should automatically hint that your opponent is in zone defense and you should throw to your square/X receiver when he breaks free over the middle. 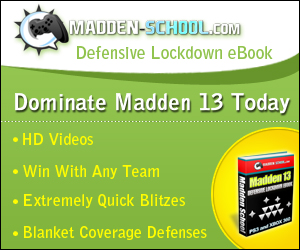