A couple months ago, EA Sports announced that they would be adding in some updates to Franchise mode in Madden 21 over the course of the year.

This was in response to the overwhelming fan backlash to the announcement that franchise mode would be receiving basically no new updates for Madden 21.

While all of us would have liked to have these updates delivered in a more timely manner, we are set to get the first one in November, which is quickly approaching.

While we don’t have an exact date in November just yet, we expect that it will be sometime around the launch of the new Playstation 5 and XBOX Series X consoles on November 10th and November 12th.

We’ll first go over what this update will contain and then dive into some more details and recent information that’s started to leak out.

This first update is supposed to address 4 issues.

We are going to focus mainly on the 2 big ones which are Superstar/X-Factor Ability Customization and Dev Trait Regression.

The way it is currently, if you want to change the ability your player has, you’d have to “Re-roll” that player by switching his position back and forth until you get the ability you wanted.

This update will make it so you can just pick the ability you want on your player given that he meets the required rating threshold.

The way this will work can be a bit confusing to explain, so we’ll do it with an example. We will use Lamar Jackson. 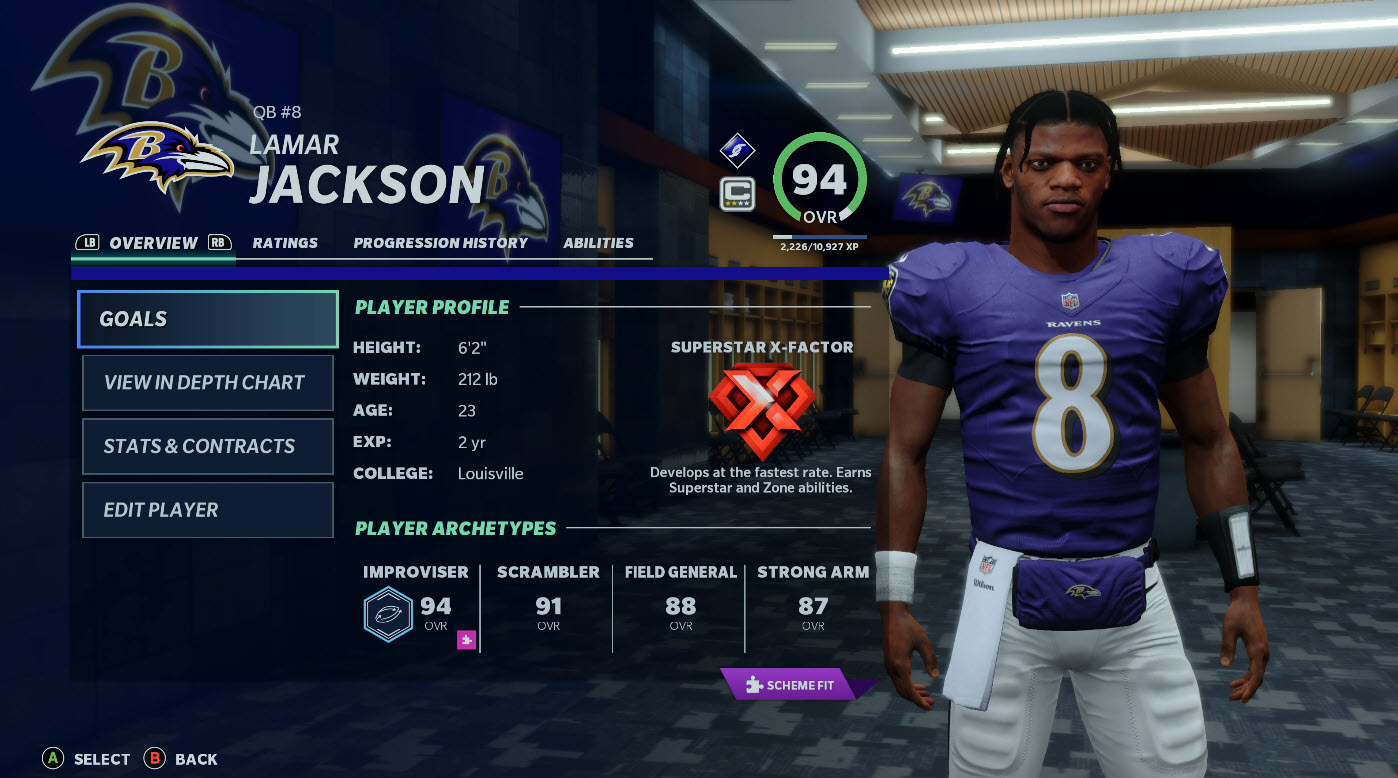 Since his Improviser rating and Scrambler ratings are both over 90+ overall he will have access to any Improviser ability and any Scrambler ability. 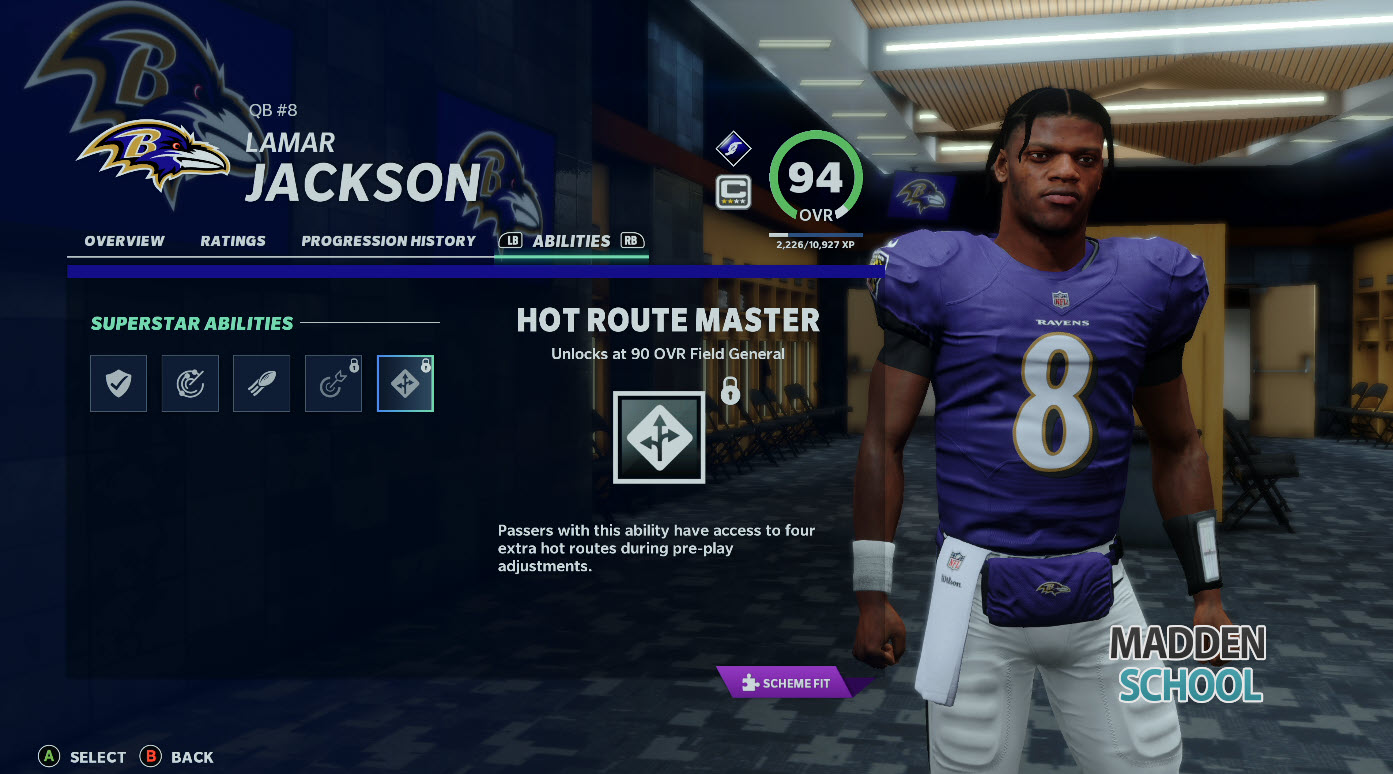 So you can see when we go into the 5th superstar ability slot, we do not have access to Hot Route Master until he reaches 90 overall in the field general archetype.

Once he reaches 90 overall in that archetype though, he will be able to be equipped with Hot Route Master even if his other archetypes like Improviser are rated higher. 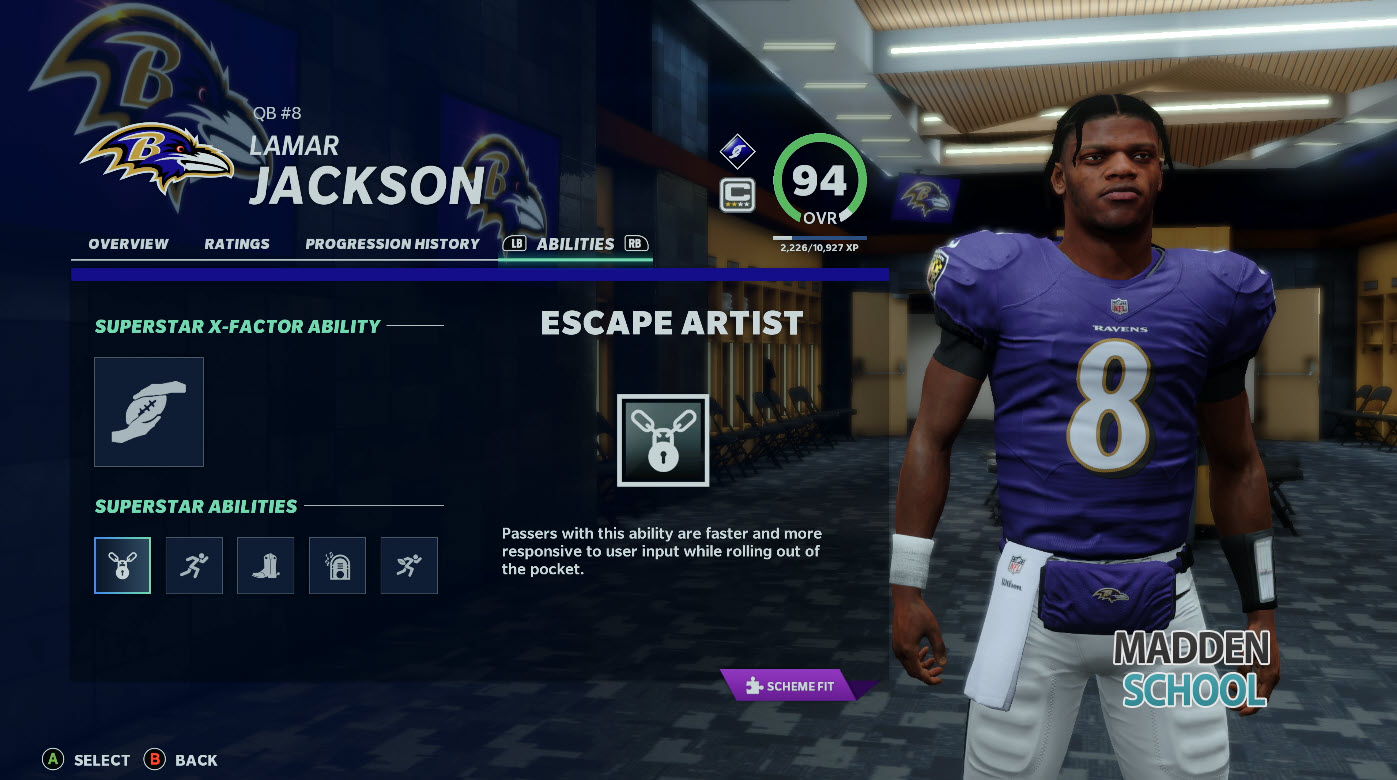 You can change a player’s ability simply by clicking on the ability you want to change. That will take you to a screen that present’s the ability options that you have.

So if we were to click on Lamar’s 1st ability slot, we would be presented a screen like this one. 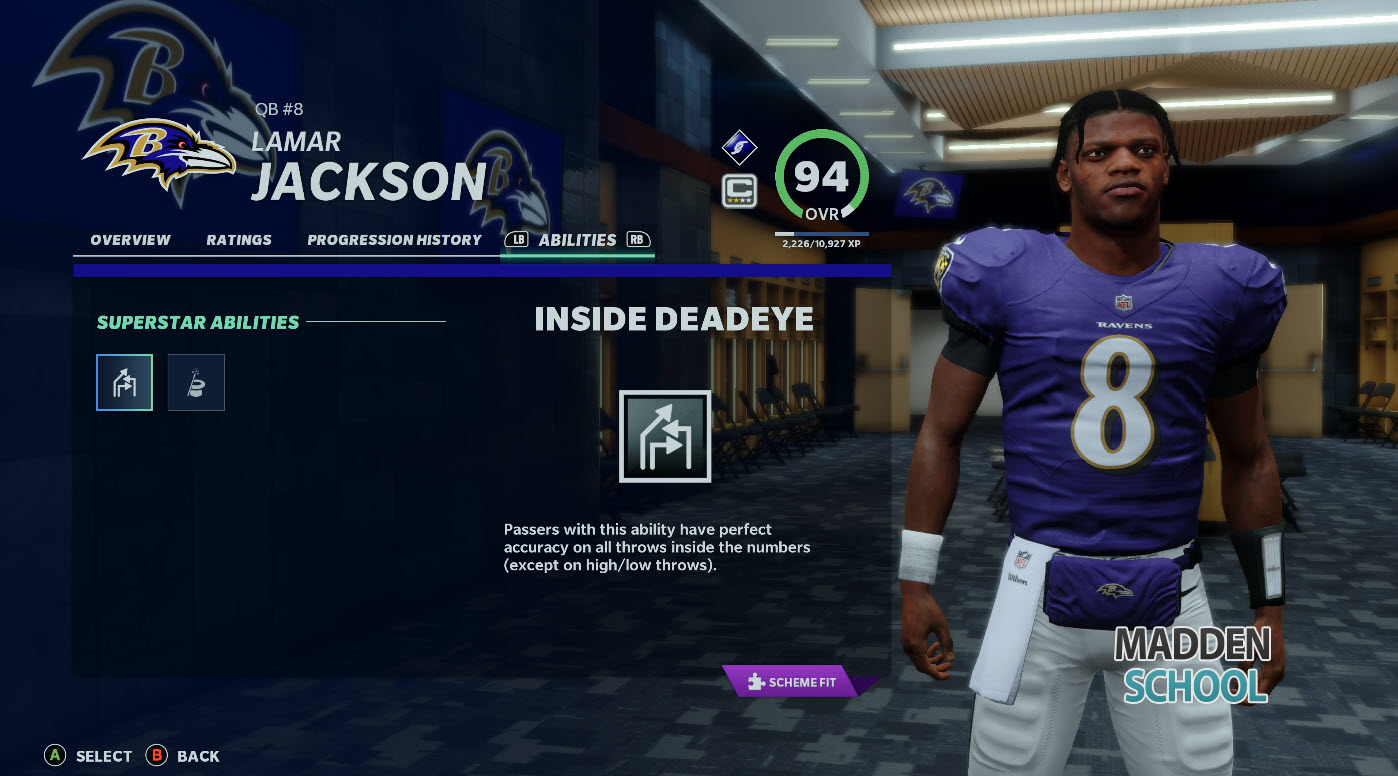 Obviously in this scenario, we would never switch out a great ability like Escape Artist for an ability like Inside Deadeye but maybe you got Sleight of Hand as your original Tier 1 ability. In that case, it would make a lot of sense to instead switch it out for Inside Deadeye.

As an aside, if you have Lamar Jackson, you will be able to create an absolute monster of a Quarterback when this update hits, so if you haven’t already tried to trade your entire team for him, you should definitely do that before this update hits next month.

If you just get a couple of skill points so he is 90 overall in every archetype, here is one example of what you could do with Lamar Jackson.

You’d have a quarterback who can scramble on any pass play with ease, get a speed burst on any QB run play, be completely immune to pressure, throws the ball significantly faster and harder than other quarterbacks, and gives all of the skill position players on the field hot routes.

While all of this sounds amazing from the perspective of a user, this will be a nightmare for commissioners who can already see this quickly getting out of hand for a 32 player online franchise.

In the original wording of how superstar abilities would work from EA, here is what they said:

“This highly requested feature by the community allows commissioners to assign X-Factors to any player via the edit player feature. Once a player has met the criteria to unlock an X-Factor ability, commissioners will be able to edit their player’s Superstar abilities and Superstar X-Factor ability by selecting from those available within his position group. Users will have control over this functionality in both offline and online Franchises.”

EA Sports associate franchise designer Andre Weingarten cleared that up in a recent Tweet, confirming that user’s will be the ability to edit their own abilities.

This prompted an immediate backlash from commissioners who are already foreseeing player’s abusing this new system.

For example, what if you don’t want your users to be able to pick and choose only the most overpowered abilities in Madden 21?

There is no on/off toggle allowing a commissioner to turn superstar ability switching off.

Weingarten responded to those criticisms by putting the responsibility on the commissioners.

Of course this makes it significantly harder on commissioners since there is no good way of knowing whether a user edited a player to change something like his number or his shoulder pads or if he changed his superstar ability.

Policing 31 other users in an online franchise is already difficult enough. Adding something like this to it puts commissioners in a difficult position.

They will be forced to either have to allow no customizations whatsoever or give unfair advantages to certain players in their league who take advantage of the system.

The other big change coming is development trait regression. This means that certain players will not keep their Star, Superstar, or X-Factor abilities if certain criteria are not met.

This is mostly an issue for franchises that go 5+ seasons. Last year by season 8 if you didn’t have a team full of superstars, you were doing something wrong. Superstar abilities should never become the norm and development regression is a decent idea to try to change that.

We don’t have too much information yet on what that will encompass or how it will be decided but that could create another giant headache for commissioners and users alike since the development trait increase system is already somewhat broken.

For example, there have been many reports of in-game development trait increase goals being met and the player not getting the development increase he earned.

Let us know what you think about the coming Madden 21 franchise mode update in the comments!

One issue I ran into with fantasy draft franchise leagues is how the game consumes available salary cap. Apparently the “fair offer” salary that cpu calculates is based somehow on the amount of salary cap available. In fantasy draft leagues it can take 5 or 6 seasons for the cap to actually be used up. Leaving large cap space in the early years. Amounts of like $135 available cap. In this case my team had Tua Tagovailoa from the draft. I managed my cap space knowing I wanted to resign Tua in year 4. Imagine my surprise when his demand “fair offer” contract was $158 million over 5 years. Yes, your heard that right. $16 million year salary, $15 million bonus over 5 years… Now you would be crazy to sign anyone, no matter how good they are, to a $150 mil contract. So my plan now is to let Tua go FA and attempt to win the bidding war

Uh, 31 million a year for a QB is about the be the bench mark. Mahomes just signed for 400 mil over 10 years so, what are you talking about?

Not that this matters for Madden, but Mahome’s contract is RIDICULOUSLY cap and team friendly.
10 years – 400M does not mean $40MM a year.

Bring The Referees Back!! Throw The Flag!!