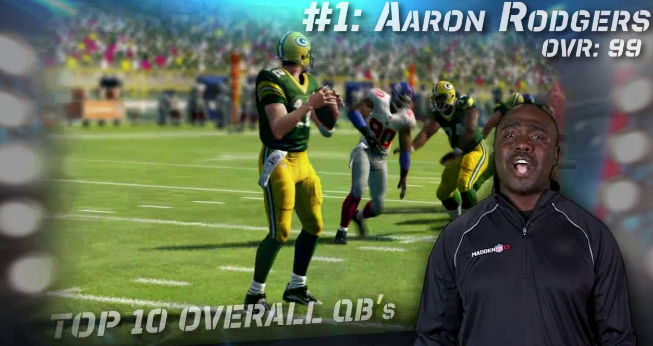 EA Sports has released the top 10 highest rated quarterbacks in Madden 13.  The group is led by Aaron Rodgers at 99 overall with Tom Brady and Drew Brees 1 point overall behind at 98.

The most shocking rating is Broncos’ quarterback Peyton Manning rated only 93 overall well behind Steelers’ QB Ben Roethlisberger at 95 overall.  Younger brother Eli is the #4 rated qb at 97 overall.

Would You Use Online Practice Mode in Madden?

i think roethlisberger is overrated because hes just a scrambling qb. He’s not a great passer so he decides to run and then he gets tackled hard by patrick wilis. Eli is good but he’s not 97 overall. Sure, Eli is clutch and makes terrific plays when the giants need it but he’s not consistent. But I’d still give him an advantage over peyton.

Shocked Eli is 97 and Peyton is 93… Figured it would be opposite. These rankings don’t really bother me much. In franchise mode I rarely use or draft either Manning, and online rosters are updated so often that I won’t be surprised if Peyton is above Eli around week 4.

eli being a 97 is a little too high. yes he had a very good year and eventually won the super bowl. but a 95 would be more just. he hasn’t shown the consistency of a tom brady aaron rodgers or drew brees

Eli and Big Ben are overrated. Peyton and Rivers are both better.

matt shaub should get respect great qb best qb in madden. jackson best rb in madden hard to bring down 3rd and 4 go to guy. a.johnson just throw it up.