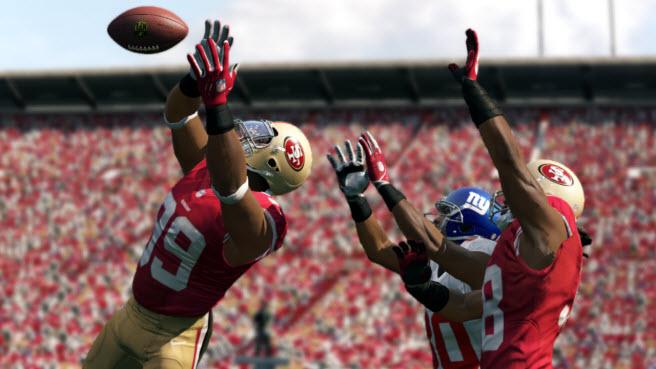 Let me start out by saying that many of the thoughts voiced in this article are opinions. Although there are many facts, you don’t have to agree with anything I say. If you do have a different opinion involving anything in this article, please share them with me in the comments section. I would also like to mention that this is my impressions on the Demo, not the full game, so it is likely that some of the things I talk about may not be in the actual game.

Now that the Madden 13 demo has been out for a good week, we can all start to give our opinions on the gameplay that has been presented to us. For many, the Madden 13 Demo was not at all what they expected. For others, including me, it is a step forward for the Madden Franchise. Although we can’t see everything the game has to offer, (Connected Careers, Madden Ultimate Team, etc) we can still see what the general gameplay will be like for all of these modes. With all of that being said, lets jump into it.

The first thing you will likely notice when you play the demo for the first time is the increased speed of the game and the new player movement. Players seem to run not only faster, but they are much more agile and swift in the way they move. Juke moves now work much more efficiently and can be used on a regular basis, whereas they were rarely used in Madden12. Over committing defenders will pay the price this year allowing for blazing fast running backs and wideouts to make bigger, more spectacular plays. Personally, I like the fast moving players in Madden 13. It really feels like real football where everyone is just getting faster and faster. On top of that, imagine the great collisions that can be caused by 2 players running at each other at such great speeds!

One thing that really disappointed me in last year’s Madden was the general ineffectiveness of play action. Not only did you get sacked whenever you tried to use it, but any good user player could look at the camera movement and distinguish a run play from play action. This ended up forcing you to cancel the play action all together (pre-play) by blocking your RB or sending him on a route. To me, this just didn’t do what play action is supposed to, trick the defense. This year however, is an entirely different story. Play action is looking very effective. Not only can you choose to cancel the play action during the motion if you see the pressure coming, but there is also no real way to distinguish the difference between a run play and Play action though camera movement!! I may sound a little bit too excited about a feature that not many have cared about for the last couple of years, but just imagine tearing through the defense in the ground game, calling a play action, getting the defenders to inch forward, and then burning them deep in the air! I think that anyone who has a strong running game should seriously look into making a small play action scheme so that they can trick the defense and pick up big yards. The new Play Action system is one of my favorite improvements to Madden 13.

The New Infinity engine that we’ve all been hearing about is great. No longer do runners just glide right over their fallen offensive lineman. It really takes some skill to run the football in this new game and I for one have had some troubles. I consistently just wanted to take the ball outside to avoid running into my own players, but after practicing enough I got the hang of it and now I can use my offense to its fullest. But the new engine doesn’t only impact the offensive side of the ball, but the defensive side too. I actually found myself missing tackles with Patrick Willis (What??) because I didn’t know the new tackling system yet. My recommendation is to go for normal tackles in the open field and hitstick only when you have teammates around you. This is because if you miss an open field tackle you can get burned, but if there are teammates around you they can make the tackle. The first couple drives, let the CPU tackle and see how they do it. After that, cause havoc with the hitstick when possible!

This year’s Madden looks like it was meant to be a Football game, not an arcade game. After playing the demo, I can really see and appreciate the time and effort the EA team has put into reducing the “cheese” in the game. I know that there will probably be new exploits in this year’s game, but at least they took out most if not all of the glitches from last year’s Madden, including no more:

And so much more. Yes, they did forget to change some things like Shake Blitzing, but I highly doubt that it will be in the full game. (NCAA 13 recently got a patch fixing the Shake Blitz from their game, so Madden 13 will likely release the game without the shake blitz.)

I would also like to mention that the Pass trajectories in the demo are far superior to those in M12. I often find myself pass leading to that the defender can’t make a play on the ball. This would have been nice last year when “Super Linebackers” would jump 30 feet in the air to swat a ball down. Now, I can throw the ball just over the defenders head and get a nice completion. What I like about this feature is that all quarterbacks can do it. Sure Eli Manning does it better than Alex Smith, but I can still thread the needle to Vernon Davis in the endzone. In my opinion the defense had it easy in Madden 12 because you only needed to wait for the offense to make 1 mistake and capitalize on it. This year with the new pass trajectories, along with other things, offenses can really cut down on those mistakes.

Conclusively, I really liked the Madden 13 Demo, and can’t wait for the full game. Everything works really well and there is no doubt in my mind that it will be a fun game. If you are wondering whether or not to buy the game, check out the Demo! It has been released on Xbox Live and the Playstation Network. Try it out!

For all the newest Madden 13 news, tips, and more check out Madden-School.com! Sign up on the madden forums to get in on the action. See you there!