EA Sports released the 3rd and final franchise mode update of the Madden 21 season yesterday. This one was supposed to focus on correcting poor CPU trade logic.

Undoubtedly there were some changes to the trade system that were improvements. All too often, though, the fix for one minor problem creates a much bigger problem and that is the case in this update.

Back in October, we showed 5 of the silliest trades we found in just 15 minutes toying around with the trade system. Many of those no longer work, so the new CPU trade logic does seem to be doing something.

That being said, there are now even more outrageous trades that work in Madden 21 after the update. Remember, this update took 6 months to roll out and it’s entire purpose was to fix terrible trades. We are going to get to those terrible trades soon but first, I want to highlight one glaring problem that often leads to these types of dissappointing updates: The gaming media.

A simple Google search for “Madden 21 news” done on the day of the update returns the top stories with these titles:

I don’t mean to pick on either of those websites. They are publishing the same thing every other major gaming media website is. The problem is, no one in the video game media actually checks to see if the update does what it claims to.

So just like our article back in October, we took another 15 minutes in franchise mode and played around with some trade scenarios to see if the update did what it was supposed to.

For this one, we decided to sign Colin Kaepernick out of free agency and see what we could get for him. As a refresher, in Madden 21 he is a normal development, 32 year old, 81 overall quarterback.

Let’s take a look at what we found and if you don’t believe this article, go into franchise mode and try it for yourself. You’ll see that all of these trades work with the most recent rosters. 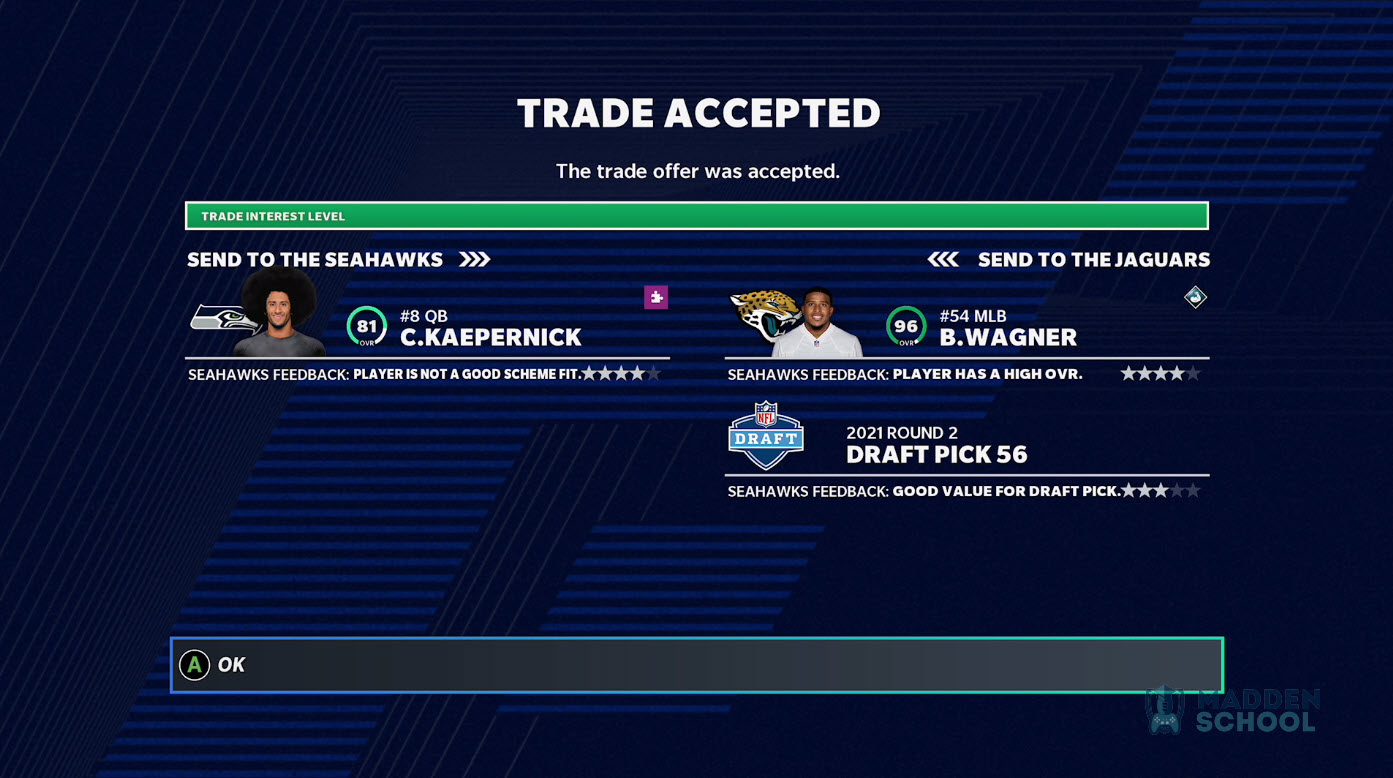 Our first offer of a free agent quarterback that we just signed 2 minutes ago for one of the best MLB’s in the league was immediately accepted.

So we went back and also added in the Seahawks’ highest remaining draft pick this year, a 2nd round pick, and they still accepted the trade.

That’s a pretty impressive haul for what essentially cost us nothing. 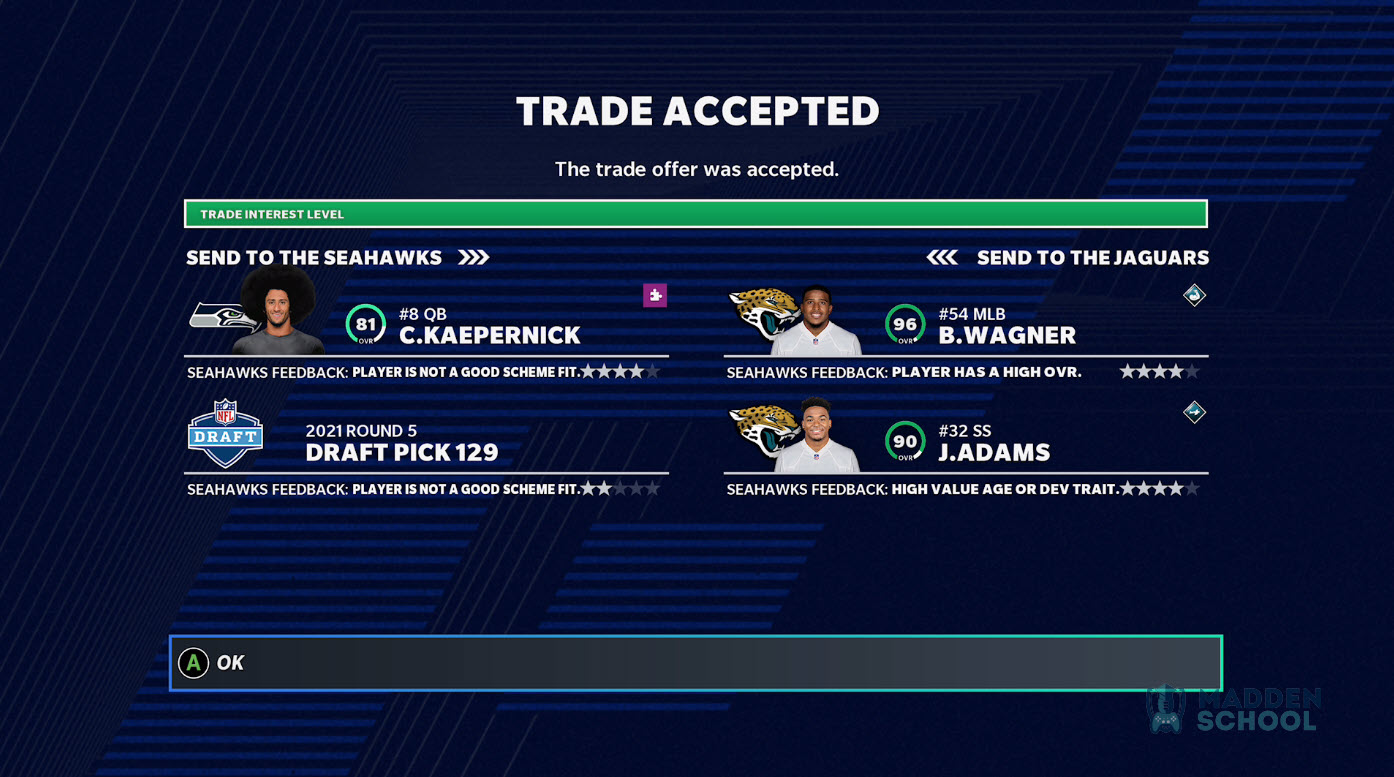 We decided to push it further with the Seahawks and see if we could also get Jamal Adams too. Remember this is the same guy that the Seahawks recently traded 2 1st round picks for.

They wouldn’t do the trade for just Kaepernick but once we added in a 5th round pick they were happy to give us both Jamal Adams and Bobby Wagner.

Also, it’s worth keeping in mind that the Seahawks already have Russell Wilson so they are trading 2 of the best defensive players in the game for an old expensive backup QB. 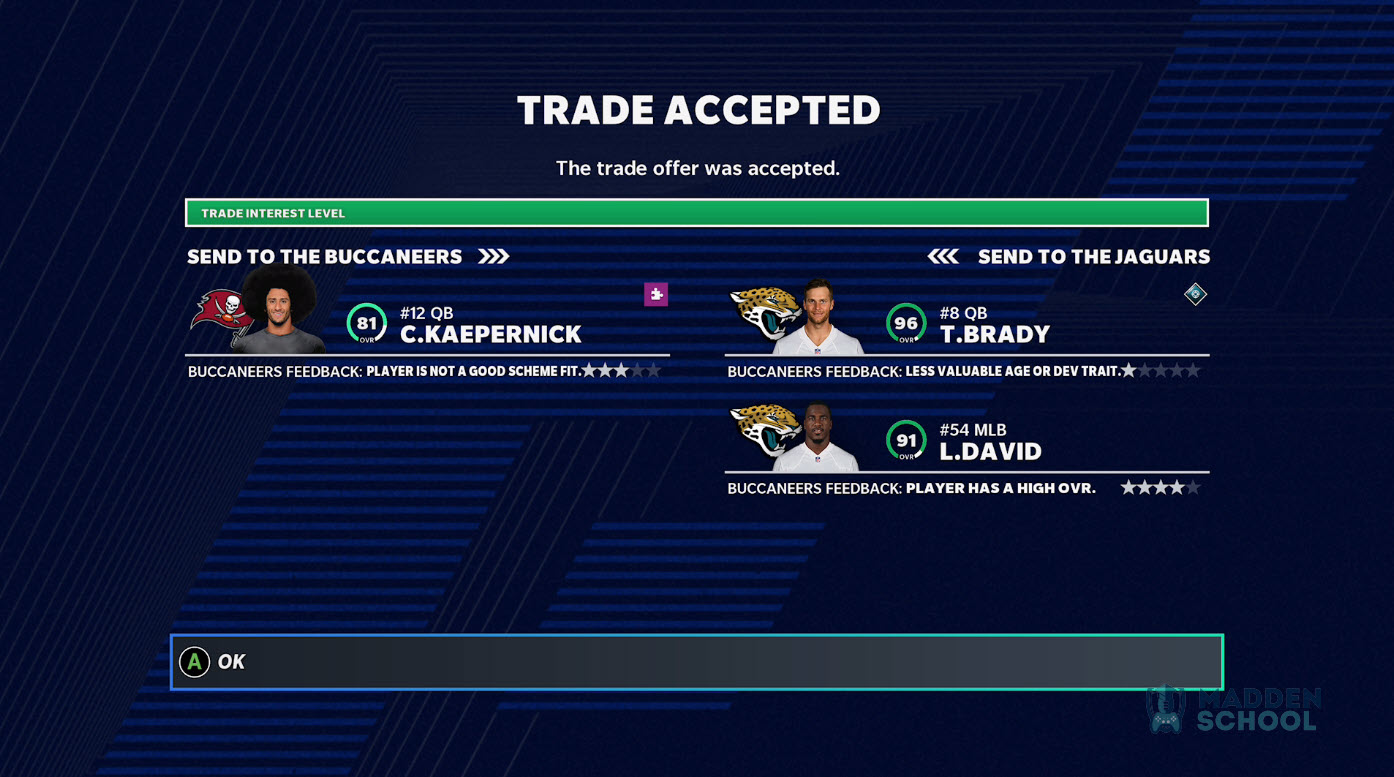 Now let’s take a look at what the Tampa Bay Buccaneers will give us.

Tom Brady and Lavonte David got a quick yes response. Tom Brady is super old so maybe that played into the trade value system.

Lets’s take him out and add a different star player in his prime. 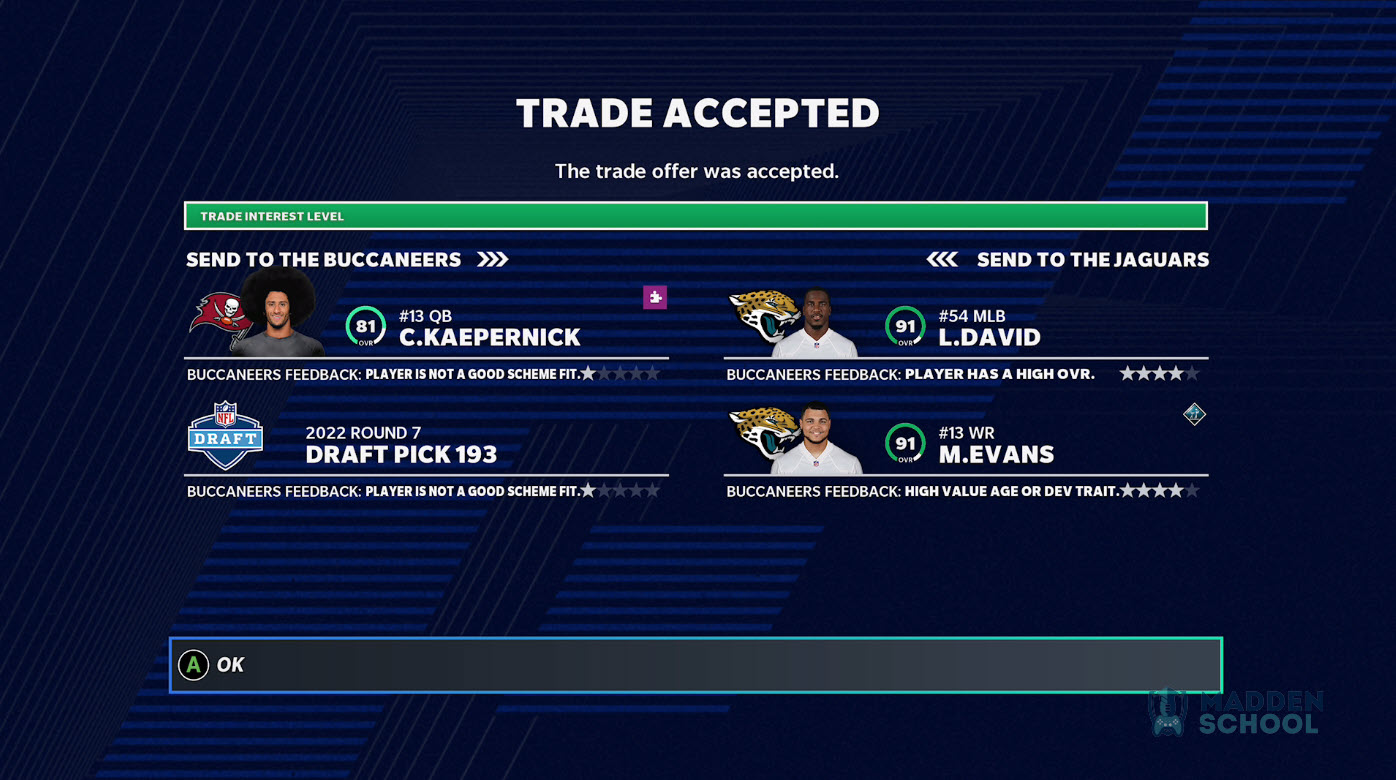 While they wouldn’t accept Mike Evans and Lavonte David for just Colin Kaepernick, the CPU twisted my arm into adding in a 7th round pick.

Remember, we are literally trading a free agent and getting back some of the most dominant players at their positions in Madden 21. 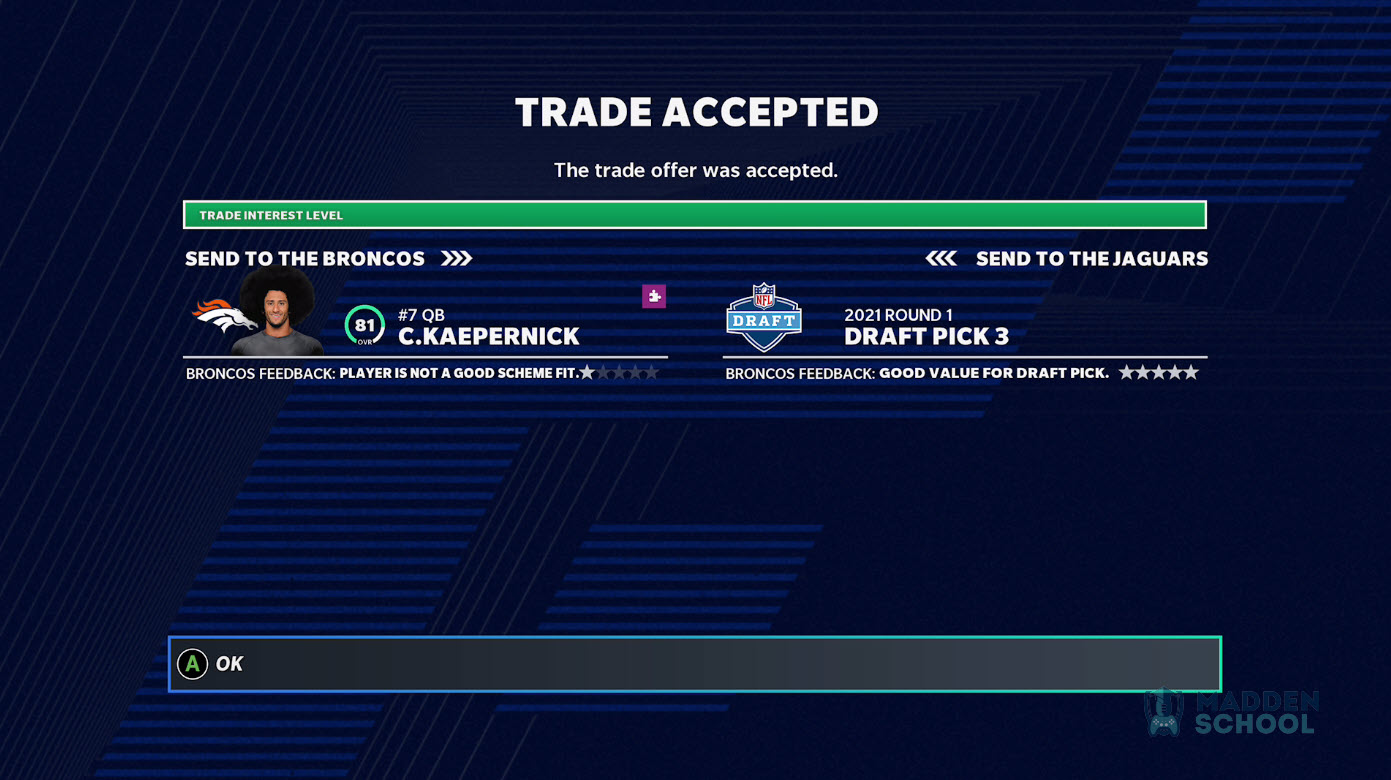 Maybe we aren’t interested in players and want picks instead. 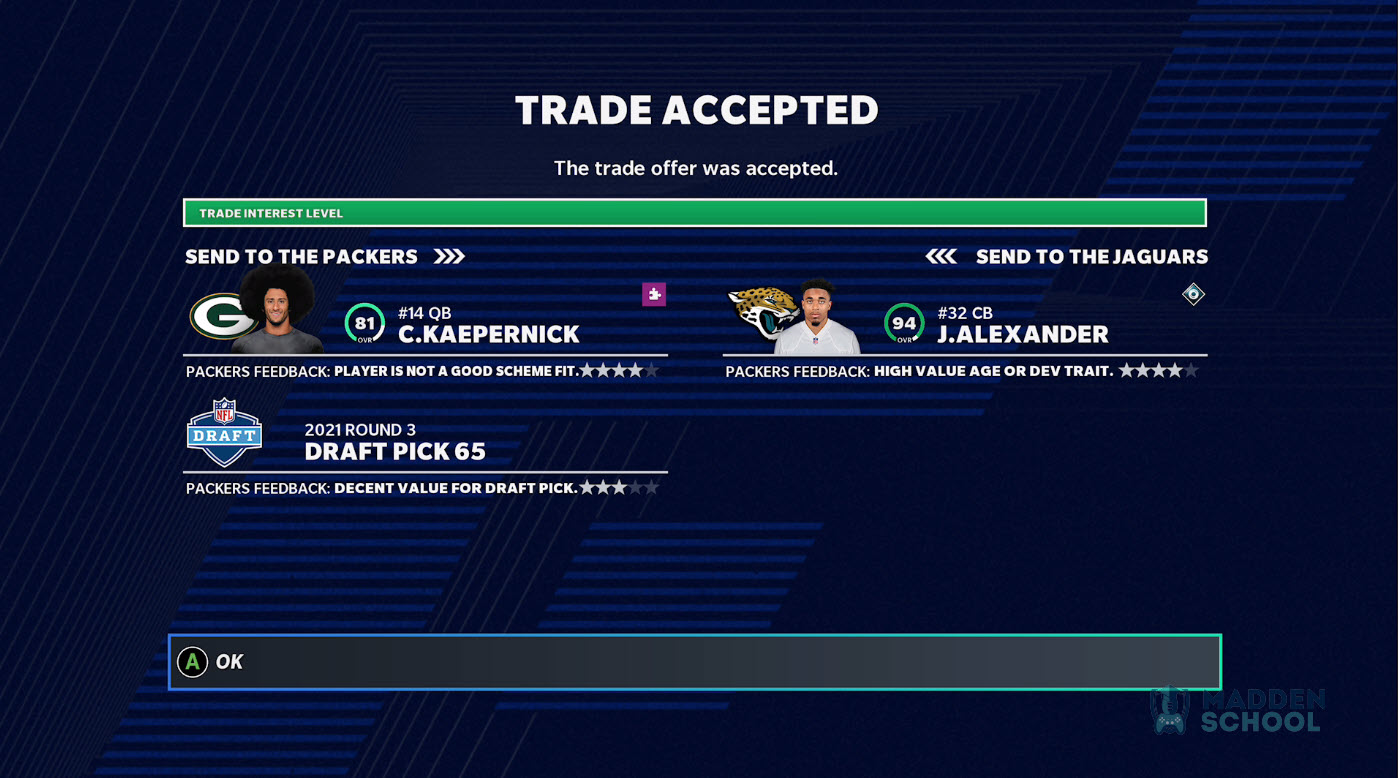 Jaire Alexander was a little harder to get. After all, he is a Superstar X-Factor, 94 overall, 23 year old cornerback who absolutely shuts down one side of the field.

We couldn’t get him straight up for Kaepernick, but once we added in a 3rd round pick the Packers were sold. 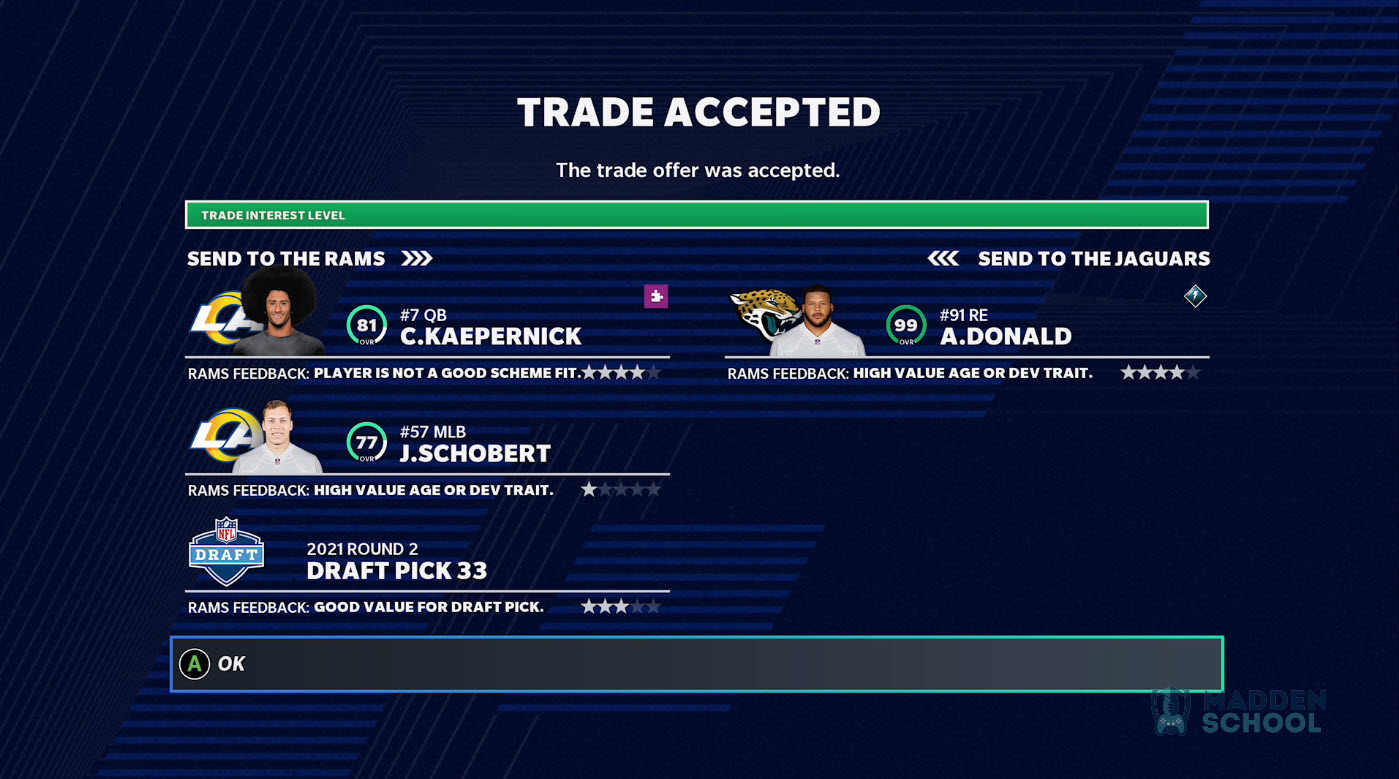 And then just for fun, we tried to get possibly the most dominant defensive lineman in NFL history, Aaron Donald.

We had to throw in a player and a 2nd round pick but that was enough for the Rams to say yes.

This was all done in 15 minutes and just with 1 player we signed out of free agency. All of the trades weren’t optimized to perfection. In some cases, we could have received even more compensation from the teams we traded with.

This also isn’t specific to Colin Kaepernick. Any mediocre quarterback like for example, Kirk Cousins, has insane trade value. As time goes on, more and more people will find other hilariously unbalanced trade examples.

EA should be commended for trying to fix CPU trade logic, but the system still needs a lot of work.

What outrageous trades work for you after the most recent update? Let us know what you find in the comments section below!

That is super funny! I pulled off a trade and I got Kahlil Mack and traded them Derek Carr. My team is insane!