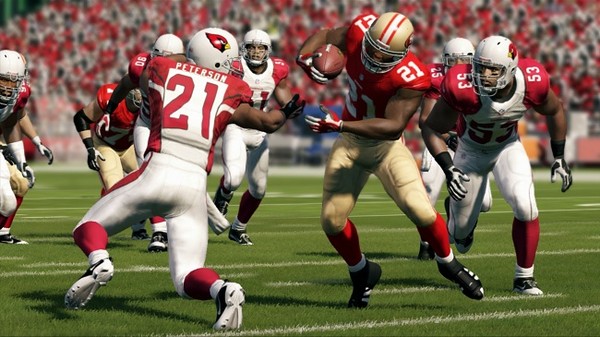 Most people have had the chance to play Madden 13 for a few months now. By now almost of us either know or have stumbled upon the pass commit option.  For those of you that don’t know how to make this work just hold the left trigger and press the right stick up. I have played around with this feature and after hours in the lab with different teams and formations this is something that every single madden player should use in every single game.

Below I will explain how it affects the defensive players during a man coverage and zone coverage plays.

First I will explain what will happen if you don’t use pass commit.

-If the offense does a delay route, or even worse a play action play where the running back does a delay route the defensive player that is supposed to cover him will most of the time think that he is staying in to block and will decide to blitz himself. Leaving the RB uncover for an easy check down.

– Pass committing will let everyone know to look out for the pass over everything else. This means the player that is supposed to cover the RB will watch him no matter what he does to make sure that he doesn’t go out for a pass. Using pass commit can help you combat those delay routes that a lot of players are using without having to hot route multiple players to cover the delay routes.

-Every player in the box tends to step forward to defend the run; Instead of stepping back into their zones. This is important to remember because this will open a lot of holes in your defense especially if you bring in your safety into the box.

-Lineman that is in zone coverage will not drop into their respected coverage hot routed or not. Of course this is not 100% of the time, but most likely than not. This leaves the offense WRs to run free or a running QB to run if you were hoping on the QB spy to contain him.

– After activating pass commit, you can stack anyone in the box and their first step will always be towards their respected zone. This can help us when we want to show blitz, but don’t want to give up an easy deep touchdown just because the safety was sucked in by the play action.

-Your lineman will drop back into their zones. This is huge when we need the QB spy to contain the QB or need extra coverage to defend the short routes or the offense heavy pass attacks.

–  Have you ever spent hour’s labbing your blitzes just to do it during a game and not have them work? Not doing pass commit could be your problem if your opponent is doing a lot of play action plays.  Pass committing not only made sure that my blitzes didn’t get sucked in by the play action and started to chase the RB they always went for the QB every single time.