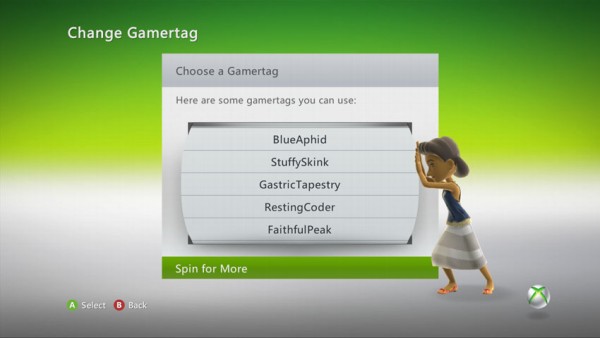 How does a person come up with their online nickname? What is the meaning behind their online ID? Is it a reflection of who they really are? There are endless possibilities when it comes to choosing and creating a nickname for online gameplay. The following are just a few examples of online player IDs and their meanings (these are actual nicknames from PSN and XBL):

Perhaps the scariest of all gamer tags are the ones where they threaten you with murder or give you the impression they are going to stab you in the neck with a rusty screwdriver. Let’s break it down section by section.

The “x” obviously means they are serious and are not to be messed with. Nobody uses the 24th letter in the alphabet with the intention of wanting to have a long discussion about the political unrest of the Palestinian state of Israel and the potential implications of having a Jewish state. When there is an “x”in the name, it is a warning to all opponents that they mean business.

The next part is the word “murker.” This may not even be a real word (it is btw), but don’t tell this gamer either way. The word “murker” most likely comes from the word “murk” which means to defeat someone to the point that they should never show their face again (urbandictionary.com).

Finally, we are left to deal with the numbers “207.” In most cases, three numbers usually represent a hometown of the player (Reggie Bush receives a 4 cent royalty fee for using these numbers ever since he made it cool when he put them on his eye-black patches). Where is area code 207 you might ask? None other than the OG (original gangsta) state of Maine. That’s right! Mother f’ing Maine, yo!

Bottom line is do not, I repeat, DO NOT, take this gamer lightly. When someone from Maine wants to defeat you to the point of utter embarrassment while carrying the weight of every “murker” in the state, topped off with the third to last letter of the alphabet incorporated into their name, you better be on your “A” game. One last piece of advice: you better start sleeping with a nightlight and blunt object hidden under your pillow if you defeat this player.

Upon first glance, there isn’t much to this simple nickname. There are a few cute letters strung together followed by a three-digit number (see above example for possible meaning of three digit number). Upon further examination however, it is clearly a complex nickname.

Take the first half-the word “Juggalo.” For those who live in a cave, this refers to a follower of the inspirational musical lyrics produced by the group ICP (Insane Clown Posse). Most likely, this player lives with a close family member in the back end of a mobile housing unit. Just because this player barely qualified to attend their high school graduation does not mean they are a complete idiot. Ordinary idiots cannot talk their mom into putting a cartoon character of a man running with a hatchet on the back window of their 1987 Buick Skylark in the form of a sticker. These types of people are advanced idiots.

The next half of the epithet is the number “420.” The uneducated may view this as the area code for the tropical paradise of Hawaii, but there is a 94% chance this gamer meant it to represent that he smokes….drum roll, please-marijuana. Marijuana is the drug of choice for these players and because he has the number four-two-zero in his online nickname, he most likely smokes it whenever possible. This player may have a short-lived video game career. Eventually, they will need to pawn off their gaming system to purchase a weekend of enjoyment accompanied by hits from a methamphetamine pipe or stamps of acid.

Final note: the “o” in the nickname is actually a zero, meaning this gamer is not alone and the ever-original nickname is in use by someone else. God help us all.

God works in mysterious ways. This player obviously had a vision of the almighty creator, and it told him to serve his holiness through the world of video games. It is not essential to spell things properly, let alone your online player ID, when serving a greater power. Saving souls and putting the letter “z” to use whenever remotely possible is the agenda of this player. If the letter “s” and the correct spelling would have been used, it would have lost all meaning and this gamer would be doomed to a life of correct grammar and be just another ordinary electronic thespian.

Just having the word of a supreme being in your nickname will give you a distinct advantage over your opponent. Let’s just hope this player does not rest their controller on top of the book known as the Bible while they are attending church. A controller soaking up all that knowledge via osmosis would render the player unstoppable and their thumbs a tool of supreme deity in the gaming world.

Many people in life need to embrace the grace of divinity. That is this gamer’s purpose. Obviously.

Written by Madden-School.com member: Dirty-Mullet.  Please feel free to leave your comments below or share this article with your friends.