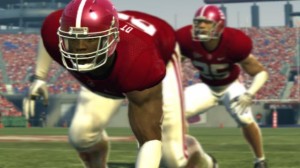 Less than a week after the release of NCAA Football 11, some truly game changing glitches have been found.  After positive reviews from many of the big online gaming companies, gamers are starting  to find cheats, exploits, and glitches in this year’s NCAA Football game.  Don’t get me wrong, the game itself is wonderful.  I truly believe that this years version is the best NCAA game in at least 5 years.  The game is for the most part realistic and life-like.  Both man and zone defense actually work.

Now for the bad news:  The game is full of wild and wacky gameplay glitches.  This was to be expected with EA Sports installing a new locomotion system in NCAA 11.  When you install an entire new gameplay system, there are bound to be problems.  Some of the problems already found can be seen at http://www.ncaafootball11.net.  Take a look at some of those cheats.  If they get out to the public, the game could be ruined.  Good thing for us that very very few people know how to actually execute those plays.