The Best Position To User Control On Defense In Madden 25 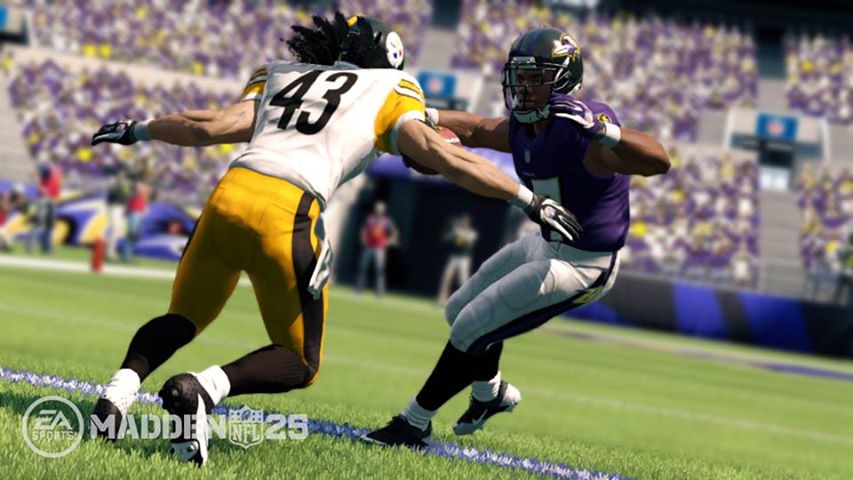 How good you become on defense in Madden 25 is in large part decided by how good you are with stick skills.  The progression of a typical Madden player goes from user controlling a guy rushing the quarterback (usually a defensive lineman) to controlling a linebacker and rooming the shallow middle of the field, to controlling a safety and letting nothing get behind you.

So the common question (which we get all the time here at Madden-School), “Which player should I user control on defense?” can only be answered by first honestly identifying how comfortable you are with your stick skills in Madden 25.

Once you are completely comfortable with your user control in Madden 25, it is time to move on to a safety.  Most pro Madden gamers user control their free safety.  Don’t kid yourself though.  If you aren’t playing at a high level or aren’t very good with your stick skills, a good player will burn you deep over and over again.  When you play with a safety, you are the absolute last line of defense.  If something gets past you, it is an automatic 7 points.  However, there are huge benefits to user controlling a safety too.  The offensive line generally only worries about the front 7.  You will always be able to fly in and stuff a run play.  More importantly, you can cover more ground with a safety against the pass.  The safety will usually have a much higher speed rating than a linebacker or defensive lineman and if there is no one in your zone, you are free to vacate it and make a play where you anticipate the quarterback will be throwing.

If you are serious about wanting to be an elite player in Madden 25, user controlling a safety is the way to go.  The only exception to this rule is if you have an insanely fast nano blitz that only works when you user control a specific player.  If that is the case, it may be beneficial to user control someone else.

Who do you plan on user controlling in Madden 25?  Let us know in the comments section.

I disagee a little. I agree with the progession being a typical path. but i think beyond just playing a safety, truly skilled players play all or almost every position at some point in a game. i change my own assignment to the situation and play calls. yeah some guys get really really good at one thing, but when guys beat the limited amount of things a guy does from a position, even the safety, and you can’t adjust and do something different, you are doomed whereas the more versatile player keeps the offense guessing, even to which player the user is controlling. i play line, corner, lb, cb almost every game with rare exception. i dont do everything right myself, but my assignments are more often than not a big factor in any given play, or at least meant to be. i never take the “he really doesn’t matter” guy. and the toughest competition i face is when someone else can do different things and be a threat in more than a 1 dimensional way.

Absolutely valid point made here. One of the most effective coverages I have seen is when someone can shut down 1/3rd of the field all by themselves and leave the other guys responsible for the other 2/3rds

just wanna say thanks to all the guys the run this site!

No problem. I’m glad it has helped you

Hate to just be a contrarian, but I’m ranked in the top 500 on madden 25 ranked games on psn on a regular basis(I’ve been trying out different squads and schemes so I’ve dropped to about 1,100 currently). And I find the best thing to do is to user control a defensive lineman/OLB that is dominant and put immediate pressure on the quarterback and being there to stop the run. I use Jason Pierre-Paul and get 5-10 sacks per game because I understand the weaknesses of the guys trying to block me. I don’t use a DE/DT because I have help rushing, I do it so I’m close to the ball. I get sacks, stuff the run, and shut down screens while essentially playing a cover 4 (with a qb spy). Plus with the new ball-hawk, I put pressure and force the bad throw, switch and get automatic interceptions. I’m not criticizing your knowledge of the game, you guys put in the lab work and are most likely better than me. I’m just saying its ignorant to assume that playing the D-Line is for beginners… I also played OLB in high school so I know the reads and things which may make it why I don’t feel as comfortable user controlling someone in the secondary. I also play a lot of cover zero and user controlled man coverage is difficult.