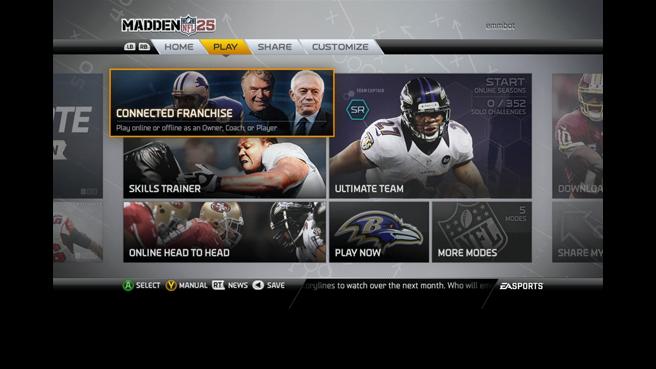 Our first tip on building a successful team in Madden 25 Connected Franchise Mode may seem obvious to some of you.  Nonetheless, it is a mistake we saw made over and over last year.  If you are looking to take your team to the Super Bowl in this year’s franchise mode, you will need to draft a good quarterback.  Our experts explain why you might be doing it all wrong.

The conventional strategy has always been to draft the QB who has the highest development trait as long as his attributes are halfway decent.  In general, this concept works but by doing it this way, you may be missing out on the better value draft picks.

Instead of doing it this way, we recommend going after a quarterback with high throw power and speed instead.  Stick with us as we explain why.  Imagine a scenario with 2 quarterbacks and their respective ratings below (any rating not mentioned should be considered to be equal in both QBs).

The conventional wisdom would dictate to take Quarterback A because he will progress so much faster.  That idea may also work for some people, but we would argue that Quarterback B would be the better choice for most.

If you covet speed and throw power in your quarterbacks, as most people do, what looks like somewhat of a toss up between 2 quarterbacks becomes an extremely easy choice.  Figure out what skills you value in a specific position and do the math to figure out how much upgrading that attribute will cost you.  Then make your draft choices based on the math.  You won’t regret it and you will come out of it with a much better team.

Please note: It is true that it will take quarterback B a longer time to earn XP in his first year or two, but that is usually made up within the first year or 2 if xp is assigned properly (aka exclusively to upgrading his development skills).

What are some of your favorite drafting tips for connected franchise mode?  Let us know in the comments section below.