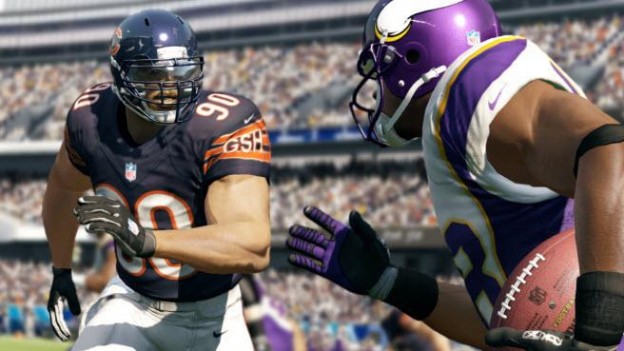 The Chicago Bears are one of those teams in Madden 25 where if you know how to use them correctly they can play like a top 5 team but if you use them without first knowing their strengths, weaknesses, and personnel the results will often vary.

Offensive Strategy: Balanced.  Jay Cutler can be hugely inconsistent on Sundays in the NFL.  However, because of his strong arm and his solid accuracy ratings, he is a top 10 Madden 25 quarterback.  The Bears receiving core is one of the best kept secrets in the game as well.  Everyone knows about WR Brandon Marshall but Devin Hester is much more effective in Madden games then in actual football because of his speed attributes.  Alshon Jeffrey, while lacking a good speed rating, is a big body receiver (which is always important in Madden) with very good catch, catch in traffic, and spectacular catch ratings.  Add in the fact that Matt Forte doesn’t have injury problems since it is a video game and you have an elite offense in Madden 25.

Defensive Strategy: Bend but don’t break.  Unfortunately Brian Urlacher’s retirement hurts the Bears defense significantly in Madden 25.  Your best bet is to keep everything in front of you and let your linebackers force fumbles with hitsticks and your secondary (that in general has good catch ratings) go for a few interceptions.  Julius Peppers is still a top 5 pass rusher in the game.

Biggest Strength: Balance on offense.  The Bears have the pieces to run really any offense in Madden 25.  Your opponent should never know what play you are calling.

Biggest Weakness: Safety.  The Bears’ safeties are pretty effective on Sundays but that hasn’t translated at all to success in Madden games over the last few years.

Rating: Good.  The Bears have a good team in Madden 25 and it is as simple as that.  They have a few weaknesses and don’t necessarily have the speed on defense to be considered elite at this point but the Chicago Bears will be effective in this years game.