Madden 19 Player Archetypes For Each Position

Madden 19 franchise mode has been overhauled. Progression is no longer based on you upping one individual rating at a time, instead everytime you progress a player he goes up by 1 overall in his specific player archetype.

To take the example further, if you have Lamar Jackson on your franchise team, he has the Scrambler archetype. Once he has earned enough XP to get a ratings boost, you choose to up his Scrambler archetype and then he might receive something like +1 short accuracy, +1 awareness, +1 juke, +1 throw on the run. Those upgrades would increase his overall by 1 point.

This is an example of how it would look with Stefon Diggs getting a +1 overall upgrade. 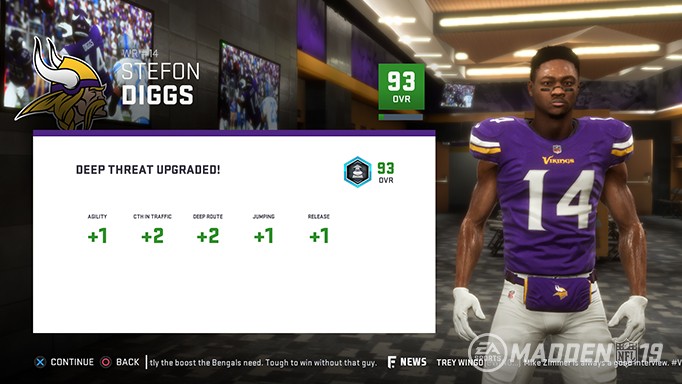 You can see that he has a Deep Threat archetype. He went from a 92 overall to a 93 overall but saw increases in agility, catch in traffic, deep route running, jumping, and release to get him there.

We went over a few other changes to Madden 19 franchise mode in an earlier post.

Below you can find the available archetypes for each position in the game.

Check out all of our our recent updates in our Madden 19 news center.

Which archetypes are you most excited to use this year? Sound off in the comments!

No, when you player’s gain enough experience points you can pick from a archtype to increase. This will increase the relative skills to that archtype. Example: Mitch Trubisky is scambler QB, but my scheme calls for a west coast QB. When I get enough experience points for him, he will gain a skill point to put into an archtype, and this will increase the skills associated with that archtype.

This is a horrible change by the Madden Franchise. They have basically taken this feature away from the user, who has no control on how they want to upgrade their own players now. Hopefully this will be fixed on next years version of the game. I know people who have already traded their game back because of this change.

You Should have put them in groups to know what scheme it is.
That’s All! Great Job and what’s your franschice team?
Mine Is Arizona Cardinals even though my favorite team are the Patroits??