EA Sports is revealing all kinds of information regarding Madden 16 today.  We went over just about all of it earlier but there is one new game mode that we haven’t yet touched on.  It is called, “Draft Champions” and it is EA’s way of bringing fantasy football into Madden NFL 16.

The basics of Draft Champions is that you get 15 rounds and each round you choose between 3 different player options.  You then take your team onto the field.  You should be able to complete a whole season in a night.

Draft Champions adds to the Fantasy Football experience by paying off draft night immediately. As soon as the draft is over, players can take the new squad onto the field. The result? A very tight draft experience that distills the best parts of Fantasy Football, and combining it with an exciting Madden event that can be completed in an evening.

Anyone who gets through a head-to -head gauntlet will truly be worthy of the title “Draft Champion.” 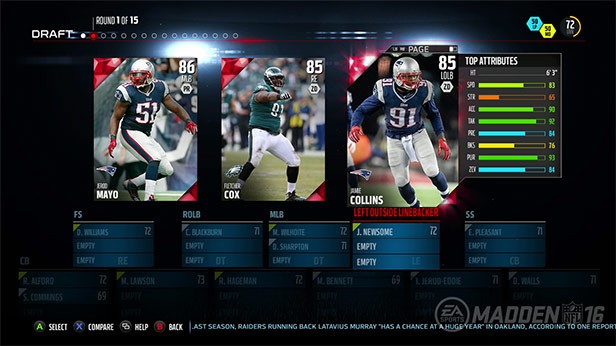 The team had four goals with the creation of Madden NFL 16 Draft Champions: Always on the Clock. Every Pick Matters. Keep it Tight. Replayable.

Draft Champions begins by picking from one of three coaches, which helps ensures each draft will be different and the pace remains high. Coaches determine a team’s offensive and defensive playbooks, and also defines two default “Styles,” typically one offensive and one defensive. Your team’s uniform is determined by your favorite team. Simply update the team choice to change uniforms.

A base team is then generated, which is playable but relatively low-rated. There is a group of players that are available for base team rosters.

While OVR ratings are similar, there will be some variety in the types of players that show up. Over time, Draft Champion players realize which players should stay, and which should be upgraded. 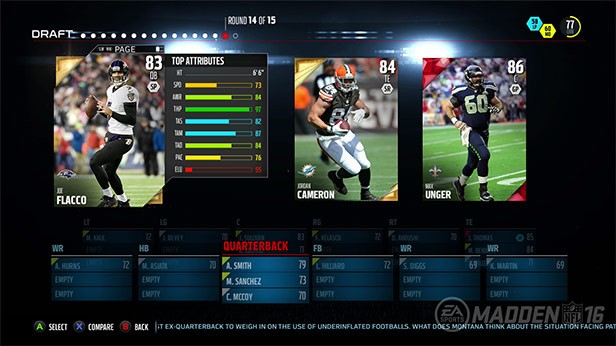 Now comes the heart of the experience, drafting players to upgrade your team. Players have the choice of three players in each round, and with a limited number of rounds, each pick matters.

Every draft will be different; there may be a number of highly-rated wide receivers and half backs in one draft, and a number of safeties or linebackers in another. Every pick will be an upgrade over the base team, and Draft Champions will give players tough decisions in every round.

Unlike a typical draft, the quality of players to choose from rises and falls from round to round. One draft may create a defensive juggernaut, while another could create a power running game behind a dominant offensive line. 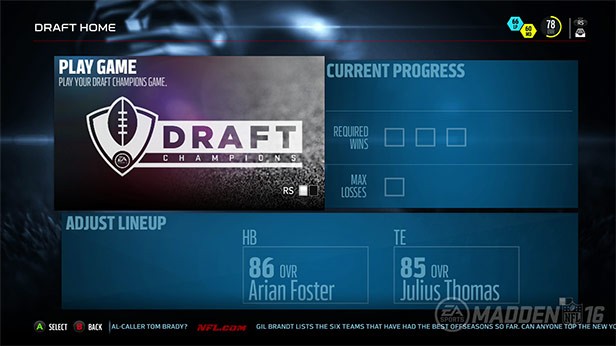 After the draft, it’s time to take the new squad onto the field. Choosing a Solo Draft gives players up to three games against AI opponents. With each victory, the quality of the competition will increase until the championship game in the brand new Draft Champions Stadium.

Players looking for a real challenge can jump into a Head-to-Head draft. While drafts happen independently, taking on the best players in Madden NFL 16 will provide the ultimate test for your drafting skills. Win four games in a row to become a true Draft Champion!

The number of games in each event are relatively low in order to preserve the “Madden Fantasy in a Night” feel for Draft Champions. Even if you get knocked out, you get to jump right back in and draft another team.

Do you plan on playing Draft Champions in Madden NFL 16? Let us know in the comments section.