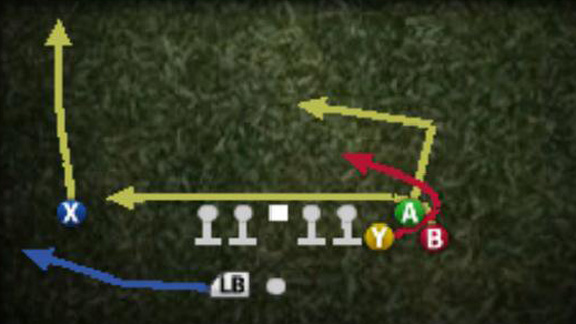 Going along with the 25 plays in 25 days theme, today we are breaking down a new play out of the Colts playbook for madden 12.  The Colts don’t like to use bunch formation’s too much but when they do, Colts DBL Trail is one of their go-to plays.  This is not a new concept, but it is a unique play.  The play is a variation of plays that have been featured in madden 11 and madden 10.   From the intial look of it, the play looks to be out of the formation Gun Bunch Wk.  Virtual quarterbacks will use this play to shred defenses in Madden 12.

As you can see, the outside wide receiver in the bunch runs a drag route which should beat man coverage as long as you have a speedy receiver in that spot (Pierre Garcon).  The route that makes this play go is run by the tight end trailing behind the receiver running the drag route.  He should be open against man and zone.  If you are using the Colt’s Dallas Clark will go open running pretty much any route.  On the far side you have a wide reciever (Reggie Wayne) isolated that you can hot route to a different route in case the defense starts overplaying the bunch.  As in the past 3 madden games, the blue route ran by the running back will be sure to get open as well, but likely only for a minimal gain.

Colts DBL Trail has the potential to be a great play that will be featured in any scheme that Colt’s playbook users run.  If mixed in with a few different plays out of the same formation, this could very well become a madden 12 money play.

Be sure to head on over to our madden 12 forum to discuss madden nfl 11 tips and madden 12 news with other gamers.