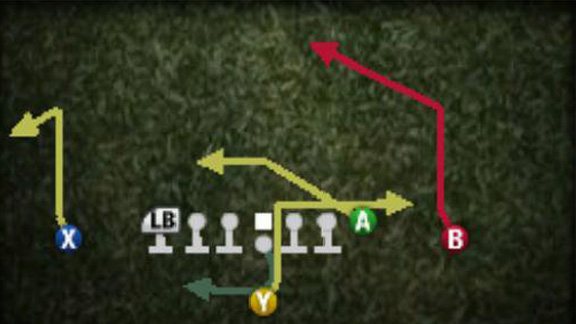 EA Sports has announced that they will be releasing 1 new play for madden nfl 12 every business day for the next 25 days.  Today, they released a new play that will be found in the philadelphia Eagles’ Madden 12 Playbook.  The play is PA Eagle Boot Left.  As you can probably guess it is designed to take advantage of the playaction to get Michael Vick rolling out to his left with the fastest wide receiver in madden 12 (Desean Jackson) running a deep post over the middle.  This could be a very dangerous play because you have to respect the run with LeSean McCoy as well as Michael Vick’s natural ability while at the same time respecting Desean Jackson’s ability to get behind any secondary.

While this play is new and will upgrade the Eagle’s madden 2012 playbook, it doesn’t seem to be unique or different like some of the plays added to the Bronco’s playbook in madden nfl 11.  It doesn’t have any never before seen routes or combo’s that will be able to confuse defenses.  Nonetheless, it is great that we will be able to see 25 new plays for madden 12 four months early.  Keep checking back for a new madden play as well as our breakdown of it every business day for the next month.