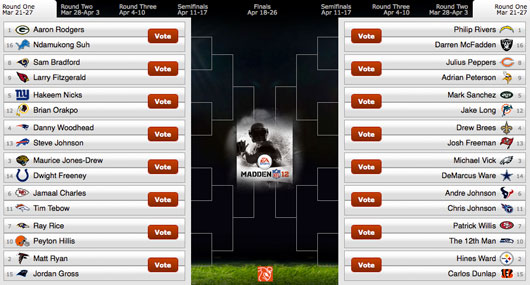 EA Sports has partnered with ESPN to bring us a 5 week, 32 player tournament to decide who graces the Madden 12 cover.  Each round lasts one week with the winner being determined right around the time of the 2o11 NFL Draft.  From an initial glance at the bracket, their looks to be one player from every NFL team.  Each first round matchup includes division rivalries, which was undoubtedly done to encourage fans to vote.

Questionable inclusions into the bracket are New England’s Danny Woodhead, Seattle’s 12th man, the Bengals’ Carlos Dunlap, the Bronco’s Tim Tebow and the Panther’s Jordan Gross.  Some notable exlusions are Tom Brady and Peyton Manning.  The madden 12 cover will be decided by a popularity contest which from a marketing standpoint is brilliant and will be sure to increae sales of madden 2012.  Voting for round one is now open at ESPN.  Follow the link below to vote now.