More Details On The Passing Game in Madden NFL 17

In Madden 16, many people complained that all players were capable of making spectacular catches. EA Sports got  the message loud and clear that you were getting tired of seeing all the one-handers by a litany of different players with vastly different catching abilities.

They now restrict those extremely athletic, high degree of difficulty catches to the more elite ball in air receivers only. OBJ, Julio, A.B., Hopkins and Dez are the type of players who will have the ability to do those spectacular catches consistently, while a Running Back or Slot receiver will trigger a catch that is more reflective of his catching ability.

In some cases, the defender would trigger animations that would not match the users input. This year, they have added significant animation coverage to both play receiver and swat to ensure you will get an animation that matches your intended action.

Another piece of feedback from the community was that there was never any injury chance on receivers who exposed their bodies and took consistent hits while performing aggressive catches. Injury chances have been increased in these situations for Madden NFL 17, so repeatedly targeting your big threat WR on jump balls in traffic now comes with significant risk of injury to that player.

Finally, in Madden 17 there is a user bonus for clicking on and using the defensive mechanics. Win chances on catch outcomes are given a significant bonus for users who click on to defenders and use the defensive ball in air mechanics, with each mechanic bringing its own risk and reward. 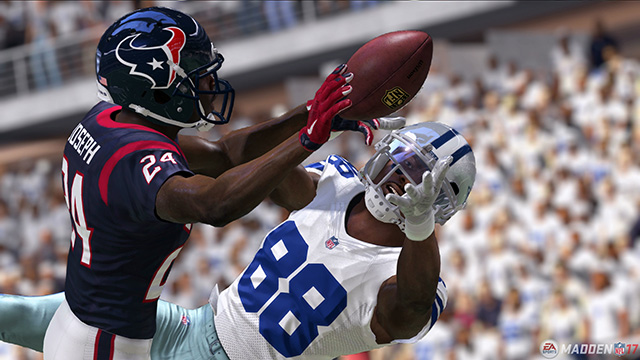 The lack of control options on defense to effectively defend the aggressive catch became a major point of contention throughout the year. A lot of time was spent discussing this specific issue with the community and it was decided that the right way to attack the problem was not to nerf the aggressive catch, but rather build an effective counter mechanic on defense.

Thus, the new SWAT mechanic was born for Madden NFL 17. Defenders now have 3 options when the ball is in the air. Play Ball, Play Receiver or Swat. If you are willing to give up the chance for an interception in order to stop the shot play, the swat mechanic is for you. It has been custom designed as the counter to the aggressive catch on defense.

The integration of physics into Madden has been an extended multi-year process. One of the biggest outliers was ‘the ball’ which was running what we refer to as ‘legacy physics’ from the Gen 3 era. With Madden NFL 17, the ball has been fully integrated into our Ignite physics engine and the results are game changing. This feature will have a significant impact on several major systems throughout the game. Here is a breakdown of just a few areas of the game impacted by ball physics:

A huge legacy flaw in the Madden catch system is once a player has ‘matched a catch’ the ball will stay in the receiver’s hands regardless. With ball physics, if a defender collides with the ball during the catch animation, the ball has a chance to be organically knocked out. This also applies to hands and limbs. If they get an arm between the ball and the receiver, the WR will no longer be able to pull the ball through the defender. This is quite a game changer for catches in traffic, and strategic use of the possession catch is critical.

In those cases where a ball is tipped, swatted or broken up, the path the ball takes is purely momentum and physics based. Players can react to it in real time and will attempt to catch it off the tip. As a result of this, we have tuned catch chances and tip ball catch chances accordingly. Dropped INT’s are much rarer this year and passes that get broken up, swatted or tipped have the potential to be caught off the tip. We have added several diving, sliding and below the knees type catches to cover these scenarios.

Throw Out Of A Sack

Throw out of sack is how Madden has previously handled situations where a defender triggered a sack animation on a QB who already started his throwing motion. In these cases, the ball would often appear to simply fall out of his hand as the sack animation triggered. With ball physics, we now have organic outcomes in these situations. They can result in fumbles and strip sacks. If the QB’s arm is going forward when he is hit, you are also going to see that outcome play out organically. This all plays a big role in fumble vs. incomplete pass. It is now more important than ever to get the ball out quickly under pressure.

More Madden 17 News You May Enjoy:

Will the quarterback vision be brought back and or at least make it optional for those who want to play with it. With all the new zone defensive upgrades, it’s going to be even harder to fit the ball in those tight windows or trying to get better ball placement in areas the defense aren’t covering

Will the defensive pass rush and better blitz packages and schemes be better than the previous Madden games? The zone upgrades are OK, but if the pass rush isn’t better, those zone defenses won’t really mean anything

Can you guys please tell me you made custom playbooks with make your own formation and plays. Please. Or at least legend playbooks. Lombardi play book. Please please please.