After year’s of neglecting special teams in Madden NFL games, it looks like Madden 17 will get some improvements in that area.  Here are the details courtesy of EA Sports.

Kicks were too easy and blocks were almost impossible without exploits. We felt pretty strongly that this was not representative of what we are seeing in the NFL. Our goals in this area were to add strategy, risk and reward elements, and the potential for game deciding plays in special teams. 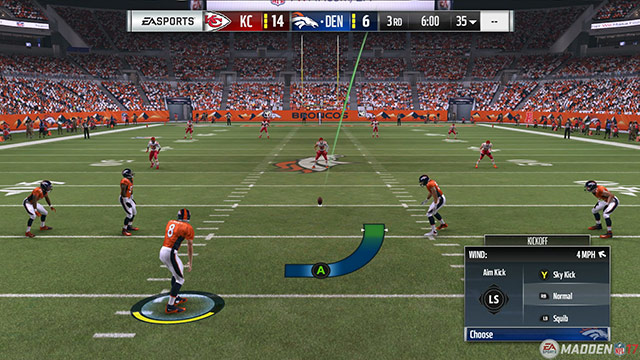 When we reviewed game tape of the 2015 NFL season, we came to the realization that it was far past time to make kicking in Madden ‘less automatic’. We felt like we needed more of a challenge than just flicking the stick up. We also felt that kicker ratings needed to have a much bigger impact on the game. After reviewing other sports titles, we quickly adopted a 3 button approach, very similar to what you would see in a golf or baseball game.

You click the button once to start the kick, click again at the top of the meter to set power and finally again at the bottom of the meter to set accuracy. The harder you try and kick it, the more difficult it will be to hit the accuracy window. We have also restored the squib kick mechanic based on community response and new to M17 are ‘sky punt’ and ‘backspin’ options for situational strategies in the kicking game. 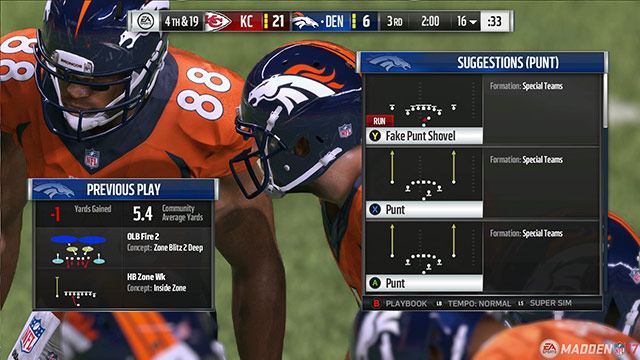 One aspect of special teams we knew we had to get into Madden NFL 17 is trick plays. Some of the most exciting and unforgettable highlights in football are of those rare trick plays that have the potential to change the outcome of any game with a single play. Who could forget Seattle’s trick field goal for a touchdown vs. the Packers in the playoffs!

While Madden has had special team trick plays for years, we have not opened up the playbook to some of the modern takes we see in today’s NFL. Offenses will now have several trick play options (both run and pass) from Field goal and Punt formations. These generally will only have a chance of working against all out block formations so pick your moments carefully!

Speaking of all out block formations, at long last we have a designed system for blocking kicks. Gone are the days of user created exploit kick blocks, now replaced by a system that has very tight control over frequency and success chances. When you call one of several punt or kick block formations, the players who are designated as ‘kick blockers’ are marked with a B icon in pre play.

Select one of these players and use the jump the snap mechanic to have a small chance at breaking through the line and driving in for a kick block. The win chance is only the beginning, successfully steering yourself in for a block and timing the block attempt are all necessary to achieve one of the most dynamic and exciting plays in football. Rest assured there are cap systems in place to ensure users do not exploit this new implementation of kick blocks. 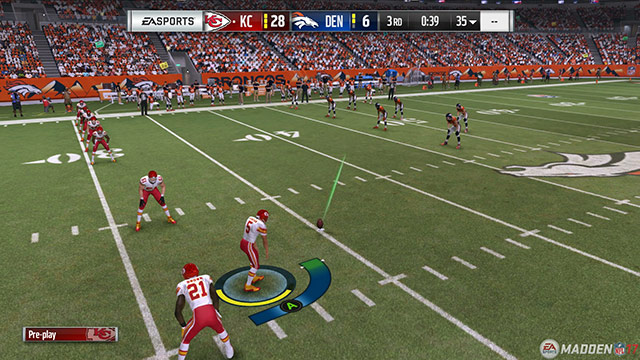 To learn more about how zone defense is completely changed in Madden 17, check out that blog.

Or check out these other recent Madden NFL 17 updates: