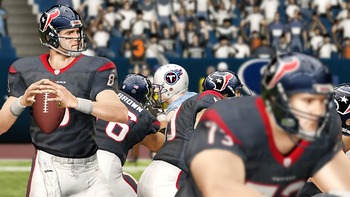 While playing Madden 13 Ultimate Team I put together a list of players who are inexpensive to get at auction, but are very effective madden players. I will list the general cost range I get the player at and explain why he is good. If you have others, please comment in this thread!

Matt Schaub (~800 coins): One of the better cheap QBs, with an immense PAC rating and solid overall accuracy stats. Romo is cheap as well if you want more mobility + don’t care about PAC.

Antonio Gates (850 coins): He’s fallen to a 91 ovr and has “only” 84 speed, but still has premier RET, CTH, CIT. He’s MUCH cheaper than guys like Vernon Davis and Jimmy Graham, but about as effective.

Jason Babin (850 coins): Excellent pass rusher with good speed. Reblitz him and if the opponent doesn’t get the ball out decently quickly, enjoy your sacks.

John Abraham and Charles Johnson (800 coins or less): You need a RE too, and both of these guys are very respectable.

Jay Ratliff (1000 coins or as low as 400): Suh goes for well over 5x this amount of coins, but is only marginally more effective. Same with Wilfork. Ratliff is the most inexpensive of the good DTs by a stretch.

Lamar Woodley (1100 coins): Fast, good coverage stats in zone, OK hands, excellent vs the run. Start him on both sides if you can’t find anybody better for cheap.

Derrick Johnson (1100 to 1500 coins): This is my user player. I’ll spend a bit more on him, because he has not only excellent physical movment stats (speed/accel/agility and even has some jumping) but also hands. A nasty, nasty player for the price. Only a legendary or the very expensive urlacher could replace him IMO, and wouldn’t be much stronger from a user perspective.

Charles Woodson (800 to 1000 coins): IMO, if you aren’t using Revis, Dick Lane, or Deion Sanders you don’t have a better option for a zone CB, and he’s not bad in man either.

I didn’t do OL. Lots of high 80’s or low 90’s go under 1k. Pick your pass or run block focus and you can get very high stats in one or the other.

That’s it for now. If you have any other ~1000 coin or less players who are extremely effective in games, even against HoF and legendary players, feel free to post them here!