Over the last few days, we’ve continued to learn more about Madden 20. We’re doing our best to pass the latest updates along to you.

The downside was if your opponent fake hiked, more often than not one of your defensive lineman would jump offsides resulting in a 5 yard penalty.

That entire system has been scrapped in Madden 20.

Tell Your Defense To Always Base Align

We now have the ability to set up our defensive alignment before we break the huddle. Your options are Base Align, Man Align, and Default.

If you’ve followed any of our Madden tips over the last 12 years, you know that the first step to every play we call is to base align.

For those of you that are unfamiliar with the term, base align just tells your defense to stay in their default positions and not spread out to match up with the formation the offense is in.

It is important because when we set up our Madden 20 nano blitzes, we need everyone to be in a specific spot in order for the blitz to work as it should. Base align keeps all your players in those spots.

This will remove 1 defensive adjustment from each defensive play that top Madden players will call. That is important because defenses now have as little as 3 seconds to make adjustments in Madden 20.

A few weeks ago we went over the fact that there will be 4 additional hot route slots for superstar receivers in Madden 20.

We have more details on that and some new default hot routes for tight ends.

The picture below shows the hot route options for 49ers tight end George Kittle. Apologies in advance for the poor picture quality. It came out of EA Play and has made its way around social media but it is unclear where/who it originated from. 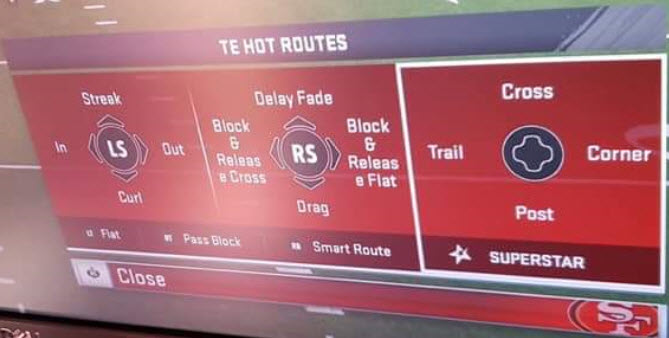 We can see that the right stick is significantly different than before. We still have the drag route but everything else is different.

The new default options are:

Because George Kittle is an elite pass catcher, he has 4 additional hot route on the D-pad. Those are:

The inclusion of these new hot routes in Madden 20 should make offenses much more original.

What hot routes are you most excited to try out this year? Make your voice heard in the comments below.