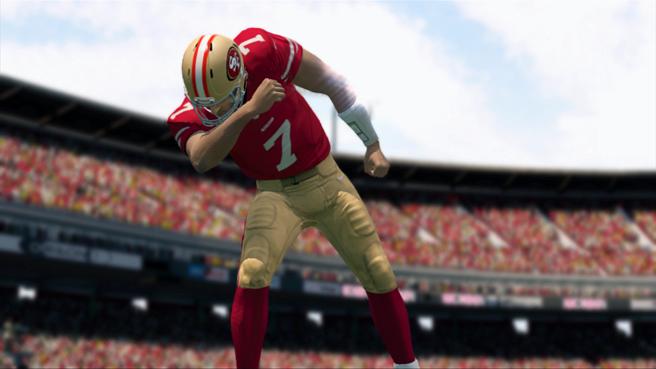 In today’s Maddenalysis post, we will be looking at a made up rating which we are calling the, “controller-throw” rating.  We have all been in a Madden game where our quarterback is so wildly inaccurate there is nothing left to do except throw your controller at your television.  We put together a “Madden standard” mix of passes (20-10-5 short/medium/deep) and analyzed how accurate each quarterback in Madden 25 would be in that situation.

The idea behind the spreadsheet is that if less than 28 of the 35 total passes (or 80%) are on target, you are likely to get frustrated over how bad your QB is (keep in mind that some on target throws are dropped/deflected/picked/bad reads/etc, while some off target throws are rescued by receivers with good CAT/SPC, so you probably need around 80% on target to have a high completion percentage).

With that idea in mind, we put together a spreadsheet below going over the on-target percentage each Madden 25 quarterback will have assuming 20 short throws, 10 medium throws, and 5 deep throws in a game.  Our results are below. Click the image to enlarge.

For those of you who don’t feel like reading a bunch of numbers and prefer words instead, we put together some actionable tips for specific teams below.  The lower the controller throw percentage, the better.

Bengals: John Skelton has 95 THP. John Skelton’s passing will also make you throw your controller in 91% of your games. Don’t be fooled by the fancy THP rating and stick with Andy Dalton (14% controller-throw rating).

Bills: I don’t care what the default depth chart says. E.J. Manuel grades out better than Kevin Kolb in every attribute you care about and won’t make you throw your controller all that much more (Kolb: 41%; Manuel: 43%).

Broncos: Remember how last year we said Brock Osweiler was almost as accurate as Peyton Manning? Yeah, EA Sports fixed that. Manning (0%) grades out way better than Osweiler (40%) on this measure.

Browns: Brandon Weeden and Jason Campbell might be similar in both overall and awareness-controlled QB ratings, but ooh boy is there a difference here. Weeden (33%) grades out much better than Campbell (59%).

Buccaneers: Why would you even try something approximating a real passing offense with this team? Josh Freeman (49%) is not an appropriate quarterback to use for this purpose. If you’re insistent on throwing all the time, just abandon all pretense of an offense and throw deep balls all game (Freeman: 97 THP, 85 DAC; 3 WRs with 95+ speed and Vincent Jackson).

Cardinals: Carson Palmer (17%) is, surprisingly, a league-average starting quarterback by this measure. Which means the Cardinals offense might actually be playable this year.

Chargers: As much as you hate playing with Philip Rivers (20%), he’s a serviceable passing quarterback. It’s not like you have better options (Charlie Whitehurst: 61%; Brad Sorenson: 65%).

Chiefs: Alex Smith is surprisingly good (4%). He grades out better than anyone not named Brees, P. Manning, Brady, Rodgers, or Ryan. Sure, his 69 DAC sucks, but if you’re moving the chains with his high SAC/MAC you can afford to miss the deep bomb every once in a while. Plus Dwayne Bowe (88 CAT, 97 JMP, 96 SPC) and Jonathan Baldwin (97 JMP, 88 SPC) can turn a few of those bad deep throws into great catches.

Eagles: Connected Careers players depending more on their passing ability and less on Michael Vick’s scrambling should dump Vick (73%) for what they can get and use Matt Barkley (20%) or even Nick Foles (33%) if they can’t stomach the 12-point difference in THP.

Jaguars: The only backups who are better in both THP and controller-throw rating than Blaine Gabbert (53%) are Ryan Mallett, Nick Foles, and Landry Jones. There’s no trade value there. If you’re insistent on passing with the Jaguars, you might try fleecing the Broncos out of third-stringer Zac Dysert, who has the same THP and grades out much better on this rating (29%).

Lions: Kellen Moore is by far the best of the Lions QBs by this rating (14%). Kellen Moore also has 75 THP. That’s why you can’t use any single statistic to tell you who’s the best. Besides, it’s not like 99 THP Matt Stafford (24%) is terrible.

Patriots: Ryan Mallett (29%) is not Tom Brady (0%), but there are 8 other teams that would love to have someone that accurate. It’s not like this team has any real deep threats to take full advantage of Mallett’s 98 THP, so if you’re in a league that’s only around for 1 or 2 seasons, Mallett is a great trade chip.

Raiders: Tyler Wilson and Matt Flynn grade out pretty close to even on our awareness-controlled ratings chart and, although Matt Flynn supposedly has 5 points better THA, Wilson actually slots in just ahead of him on this chart (30% to 31%). Wilson’s 6 point advantage in THP isn’t actually offset by a tradeoff in THA if you play this kind of passing game.