People always complain about Madden’s plays and how they wish they had better plays, or a play editor to make better plays. However, for the most part Madden does a good job of representing NFL passing concepts and NFL running concepts. Curl flats, smash, four verticals, drive, shallow cross, mesh, bench, and the rest of our familiar set of passing concepts is what you’ll see ran on Sundays and they work just fine in Madden for those that truly understand what they are trying to do. However, that doesn’t mean there are areas that Madden can’t improve their play selection and how plays are called in general. We are going to look at an innovation that is sweeping through football that needs to be seriously looked into by EA, packaging plays.

Packaging plays, what is it? Well it’s an idea that jumped up out of college spread and air raid offenses as a way to make sure the offense always has a favorable matchup. The most famous packaged plays is Dana Holgorsen’s Stick-Draw that helped him make his variation of the air raid offense so explosive at Oklahoma State for years and is a big reason WVU was able to put up 70 on the Clemson Tigers in the Orange Bowl. To understand what this is I’ll provide you a play diagram of the famous Stick-Draw 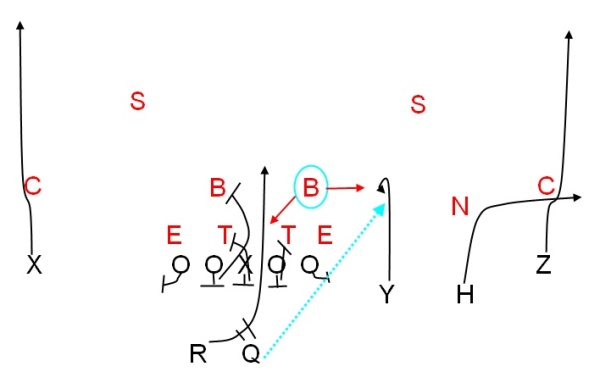 This diagram shows exactly what the two packaged plays are trying to accomplish. First and foremost as you can see from the play diagram the blocking isn’t a pass blocking scheme. The Stick-Draw is blocked like a running play even though it has the option to pass in it. They are playing off of the Mike line backer and whatever he does post snap decides how the play is going to unfold. If the Mike crashes in to take away the run post snap you simply throw to the stick. The defense is set up to lose right from the snap. While many people know that being able to adjust at the line of scrimmage to presnap reads differentiates between average and elite QBs that still can be wrong. These type of concepts where you package a quick passing concept with a run play and read off of a defender is instead waiting for the defense to truly show its hand allowing you to never be wrong. It’s option football with a whole new twist and its quickly taking over college football.

Another example of packaging plays includes:

This one is another Holgorsen invention where he packages the popular air raid Y-Cross concept which aims to act as a weak side flood with the ever popular quick screen to the flanker. Again you see this isn’t like combining a bubble screen with another concept but instead is a full on screen with pulling linemen and everything that is packaged with the Y-Cross passing concept. This time we are reading off of the safety on the screen side. If he crashes down to take away the screen we simply throw to the cross thanks to the void the safety just left behind and if he hesitates and stays back we take the numbers advantage on the screen all day long. The safety is wrong even before the play begins because there is no right decision.

You may now be saying that even though those were very interesting what to they have to do with NFL play calling, those are both from college offenses that are very college oriented. You’d be right these two are ran by college teams but that doesn’t mean packaged plays haven’t entered the NFL. Enter the Green Bay Packers Stick-Slip Screen: 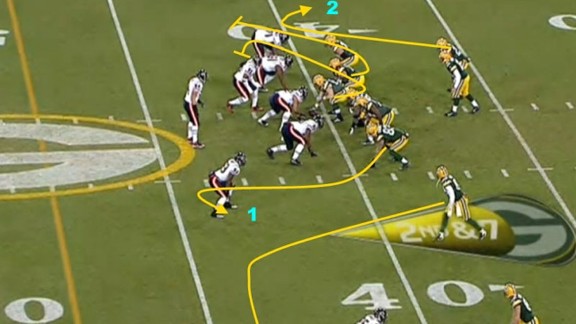 This is a take on the Stick –Draw made famous by Holgorsen and looks to play off the Mike just as Stick-Draw does. It’s also a complete screen blocking scheme right from the start so it’s not like this is simply packaging two different short concepts into one play. The goal is to throw where the Mike isn’t, if he goes after the stick route then you simply take the numbers advantage and throw to the screen as was the result of this particular play. If the Mike crashes towards the screen to break it up you now have the flat defender in a position where he has to defend two players which is impossible so the defense loses even before the ball is snapped. This particular play resulted in a 32 yard screen pass by Ryan Grant.

Ok, now we enter week one of the 2012 NFL season and the Redskins open up the game by throwing a lot of short quick screens. To the casual observer this simply looks like a plan to get Griffin some confidence and to get him into a rhythm in his first start. However when you look closer you see that these simple looking screens weren’t really simple screens they were a take on the zone read where instead of reading the play side DE they were reading the safety and either running the ball if he goes towards the screen or throwing if he crashes in to break up Shannahan’s famous inside zone run.

This particular play is something that you’d only see in college spread offenses a few years ago but now one of Shannahan, one of the older West Coast coaches, has implemented it into his scheme. It was probably added due to Griffin’s comfort level with it the concepts behind it but the simple fact is that it is there. These concepts are leaking into football at every level and are something EA should be looking into adding in the future of their football games. This is the new wave of offensive innovation and if EA doesn’t want to be left behind they’ll get in the film room and begin drawing us up some packaged plays.

Sources for Images
Dana Holgorsen’s Draw Stick Play
“Packaged” Plays and Rethinking the Concept of Modern Play Calling
Back to School: How Mike Shanahan is Using RG3’s College Offense With the Redskins