With the new Madden 25 season ready to start in a couple months, I have decided to give you guys my two favorite schemes from Madden 2013. Most Madden players throw any real football ideas or schemes, while I still enjoy pounding the rock, and setting up my opponent’s defense for a big play. My schemes are based on giving the defense the same looks, and at the same time, being able to pick them apart with the short, quick passing game, which opens up the big play. 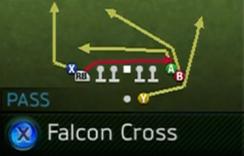 Well, this is my Cover 2 Man beater that I used quite often at the end of the season. With Brees throwing the deep ball, and Sproles at RB, this play can be deadly. If you do come upon a zone the B streak is nasty. I gave people fits with it all season. Its more about the WR’s SP and ACC more than anything. He almost gets a speed boost when we catches it and will split a Cover 2 zone easily with some practice. If you do get the Man look from the defense, you will quickly make your decision not to throw to the B WR’s streak and check down to the RB. Sometimes, the man guarding the RB will get picked by the B WR’s Streak and you can pop a big gain rather easily. If the coverage is good throw a deep lob out to your fast RB (who will more than likely have a slower player on him). You can easily get this ball in on the sideline, this throw got me so many huge plays against Cover 2 Man, which is normally safe from the deep ball. Opitons may be limited on this play, but don’t underestimate the B WR’s streak, it was probably my favorite throw of M13 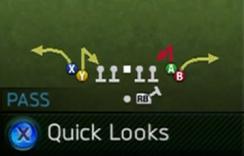 This is the simple setup where I am only looking for a short pass or a streak by the speedy Devery Henderson (one of my favorite Madden players ever). This play is so deadly because of the quick hitch that is run on both sides, you can’t user guard both, especially with the threat of Devery on the streak which was WAY to easy to take advantage of this year. This play will annoy your opponent to no end, setting them up for some big plays. This is also a big time nano beater, you can throw the quick pass to either side, or if they are bringing the zero blitz you just lob it up to the fast WR on the outside (B WR) and let him outrun whoever is on him.

This play is one of the smoothest plays I found this year, reads wise. It is so simple to watch them happen. You are looking at the A WR on the short hitch right off the bat, then the B WR just over top after you have deemed the A WR covered. The part that makes this play is the deadly combination of the Drag by the X WR and the Wheel by the RB, this I picked up from Jerry McGuire in MANY league games. The Drag route by the X WR (Lance Moore in my system), sucks down the zones on the right side when he comes across, opening up the RB on the Wheel Route just after you have cleared the first two reads (A WR, then B WR). it’s a basic flood concept, that works all to well against the AI defense in Madden 13. Both setups of this play enable you to beat your opponents defense short, to suck them up to the line of scrimmage then bust one big over the top. Man, Zone, whatever, you can win with this play alone, well, if you throw in a couple Draws. 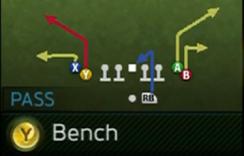 This is one of the plays that I used the RB Streak out of rather excessively this season. The A WR on the corner route is great against a zero blitz matched up on a safety. The RB streak opens up big time against most zones, being helped out by sucking the LB’s down to the B WR on the Slant and the X WR on the Drag (This Drag route is simply to bring down the Lbs opening up the RB streak. The thing that makes the RB streak so deadly is not just using it as a zone beater, but throwing it against man defense. All you do is lead the RB to the side where the LB is not, that simple. Also, if you want to stare it down from the snap, just look for the LBs blitzing, if you get this the RB will be WIDE OPEN for a quick throw. The RB Streak was my go-to route ALL season, if nothing else was working and I was in a tight defensive battle, this route always hit for the big play. Another way to set this play up is to simply streak the B WR (as usual), and he can can a nice little pick on the A Corner route.

To go along with this scheme, make sure you take a look at the HB Counter! After throwing the ball so much this money run play will be sure to keep your opponent’ head spinning.

More on the RB Streak to come in my next article, as I will be sharing my favorite scheme from Madden 13. I always enjoy as much feedback as possible, and since I will continue to write these for the M25 season, please give me a critique! I’m saving the best for last, so my scheme out of the Split Redskin will be coming soon! Hope you all enjoyed my debut article here at Madden-School!