EA Sports has released a new blog detailing how Madden 17 will handle defensive gaps and run fits.  The system looks to be completely overhauled and something that should make playing defense much more realistic.

In case you missed it, you can also check out what we know about the new ball carrier moves in Madden 17.

Defensive AI has gotten a complete reboot in Madden 17 for both run defense and pass defense.  Not only has the coverage gotten an overhaul, but for the first time in Madden history, the defense will have a Defensive Gap control system that makes defending the run more engaging and authentic.

When implementing the run fits system, we installed it the same way the defensive coordinators install their defenses in the NFL – Alignment, Assignment and Technique – and what this amounts to is every defender on the field having a specific job to do on each play the user calls. 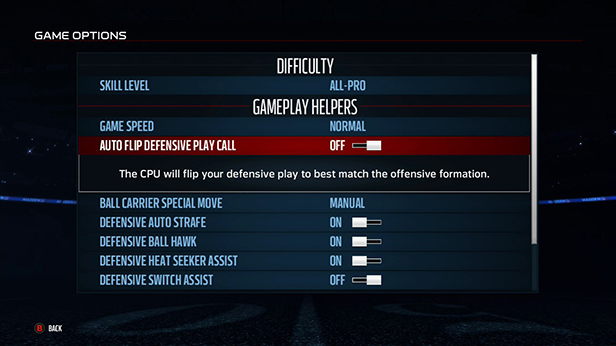 The first step in upgrading the AI is ensuring that defenders are aligned in the correct place to give them the best chance at executing their jobs, thus the first piece of the run fits system is the new Defensive Auto-Flip feature.

And if you prefer to handle all the alignment yourself, the Auto-Flip feature can be toggled OFF via the Gameplay Settings menu; the user can also re-flip the play at the Line of Scrimmage just like in previous versions. 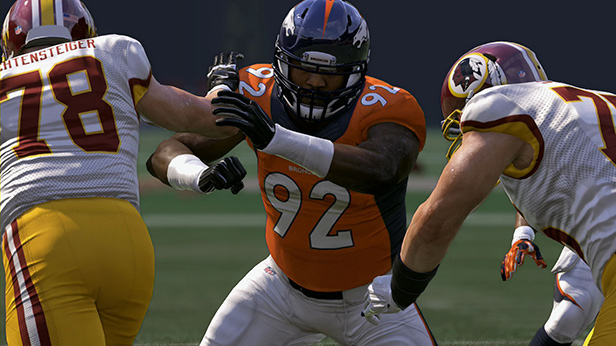 The next step in the Run-Fits system is Defensive Gap assignments. All defenders, both in the NFL and Madden 17 have a specific responsibility on each play – this includes gap integrity for ‘run-fit’ defenders and coverage responsibility plus run-support for coverage defenders – making the play-calling experience more engaging and strategy-based than in previous iterations.

The defenders now have AI and behaviors to execute the play called by the user and realize the intent of that decision, and these will be apparent to you both before and after the snap. 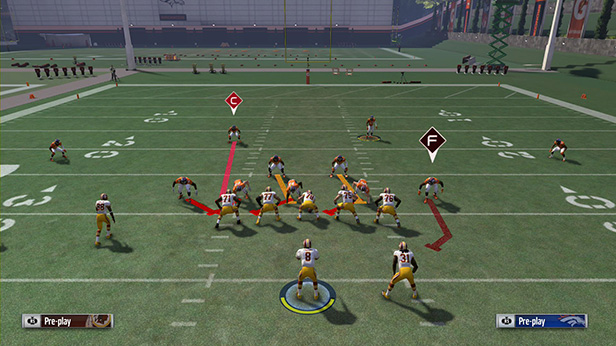 The individual gap assignments come from the intent of each play and is completely dynamic, both before and after the snap, and even includes gap responsibilities for each defender for plays going in either direction.  You can see the desired gaps before the play via Coach Cam Art by using the RS right/left to see the Run-Fit art for either direction.

The number of ‘run-fit’ defenders is completely dependent upon the specific play you call on defense. Defenders who are considered to be ‘run-fit’ defenders are the players that are ‘Run First’ players and the art will show where their fit is, which will dynamically update to match the formation of the offense. These are the players generally inside the tackle box and/or players who are critical to each specific play type (for example, in Cover 4 plays, all the defenders in the box will show as run-fit defenders, plus the two deep safeties are run-first players within this scheme).

Some defenders will not have a run-fit or gap because they are ‘pass-first’ players, but will still react to the run and fill-in as support players when they confirm it’s not a pass play.

The decisions you make as the play-caller will have a big impact on your team’s ability to stop the run. Not all defenses fill every gap vs. every offensive formation – if the offense come out in Goal line Normal and your defense is in Quarter 3-Deep, there will be gaps that are not accounted for because the Quarter defense has more ‘pass-first’ players than it does ‘run-fit’ defenders.

After the snap is where the new gap logic really separates itself from previous Madden iterations. Just because a defender is assigned to a gap pre-snap doesn’t mean he’s locked to that gap for the remainder of the play. Each defender has AI that allows him to update his gap and react to the war in the trenches to fill the open lanes created by the blockers as the play develops. This AI relies heavily on the Play Recognition Rating.

Based on the PRC rating, defenders will be faster or slower in reading the play and finding the right gap to fill. Each player that is not blitzing will start the play in an assignment we call ‘Read and React’. You can see this in action with our new Read and React movement animations, which has players strafing laterally in a controlled state as they read the play, while also leveraging their assigned gaps. Even defenders who are on the line of scrimmage, but not blitzing, will use this assignment to read the play before attempting to make a play.  The higher the player’s PRC rating is, the faster he will be able to break out of his read and react assignment and fill the gap he’s targeting.  In combination with the ratings of the DL as they engage the OL, a defense with higher cumulative ratings will be more successful at defending the run than lower rated defenses.

Because of the new Run-Fits system and Gap logic, users on the defensive side of the ball will have the ability to use strategy and realistic football concepts to counter running plays that their opponent uses regularly. 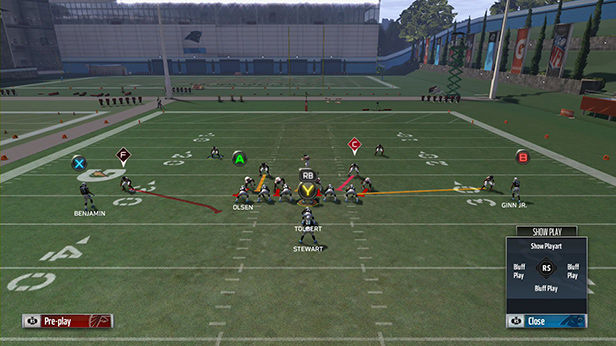 The improved AI doesn’t just stop with gaps. Not only do defenders now have a gap to play, but they also have a technique in which to play that gap.  As any football fan knows, the defense can’t just get in a gap and shut down the offense. The defenders also have to take that gap with an intent, and in Madden ’17 we now reflect that with new run-fit techniques they will use to play their gaps authentically: Force, Cutback, Fill, Jet, Crack-Replace and 2-Gap

To provide the proper balance for the ground war, many blocking improvements have been made as part of the run-fits feature, with an emphasis on zone blocking AI and animations.

With defenders now working to fill gaps created by the blockers, outside zone and stretch-type plays look and feel more like their real-world counterparts, with the defense getting stretched laterally. This creates lanes for the ball carrier to read and gaps for the run-fit defenders to fill.  With the new ball carrier mechanics, finding the cutback lane that has not been accounted for by the defense has never felt more rewarding.

You will also see new laterally moving blocks, such as zone steps, reach blocks, double teams, cut blocks and force blocks that will make you feel ground war just like you see on Sundays. Blockers also have a job to do to execute the intent of the play, so you’ll see the blockers performing their blocking assignments to meet that expectation.

Madden 17 has gone deep on both sides of the ball to deliver the most authentic experience run-game experience we’ve ever offered. By using authentic run-fit installation pillars – alignment, assignment, technique – on defense and matching that with realistic blocking behaviors and AI, there’s only one thing left to say to say to your team when diving into the ground war in Madden ’17 – DO YOUR JOB!