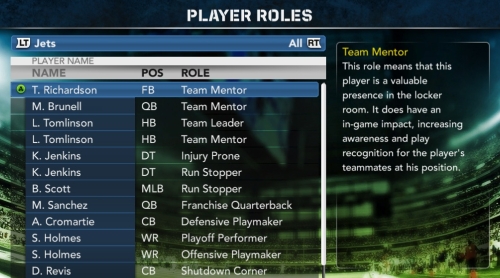 The first big news about madden 12 franchise mode is that there will be pre-season cuts.  You will enter the pre-season with 75 players and have to cut down your nfl roster to 54 players before the regular season starts.  This is a feature that has been requested for years.  Gamers will be happy about the addition to madden 12, but it will be overlooked soon enough.  Here are a few other details about the madden nfl 12 franchise mode.

•Dynamic Player Performance: Player ratings fluctuate based on their performance.

•Player Roles: More than 20 roles affect player and team stats over the course of the season.

•Free Agents: You get the opportunity to make quick bids against other team’s general managers. This will surely speed up the free-agent process.

•Draft Class Improvements: Robust set of draftees built for 30 seasons of franchise. Teams draft based on their real tendencies.

•Coaches Actually Matter: Coaches will now have a small impact on how their players perform on the field based on their unique coaching style.

•Team Switch: In any offseason, change control of which teams you run in Franchise mode.

•Other Changes: Many other small tuning and additions are coming including retirement logic, a more accurate salary system, fixes to the injured reserve system, better simulation stats, and more.