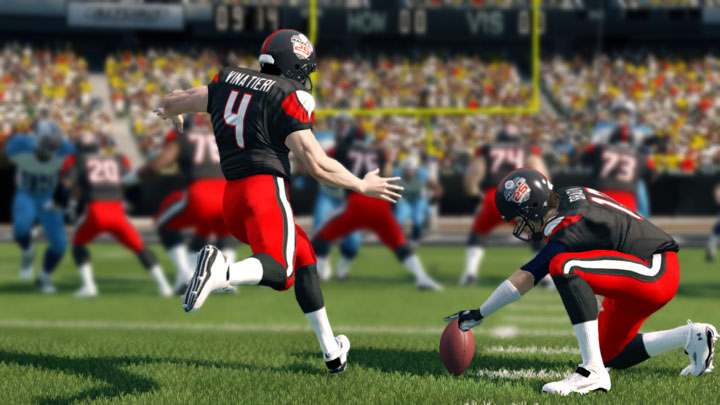 Madden 25 is just around the corner which means that we are back with some more Maddenalysis!  In today’s post we will be going over the exact equation for how a Kicker’s overall rating is determined in Madden 25.  It changed slightly from last year’s game.

How We Did It (Skip if you hate math):

We ran a stepwise regression analysis in R with output variable OVR and input variables KPW, KAC, and AWR to give us a linear equation OVR = a*KPW+b*KAC+c*AWR+intercept. Once the coefficients (a, b, and c) and intercept were determined, we verified that rounding the linear combination of KPW, KAC, and AWR to a whole number did indeed give us the overall rating.

Due to quantization noise (each OVR rating may be off from the true OVR rating by as much as 0.5 points), we are fairly confident that these numbers are valid approximations but not the exact numbers used. We assumed that simple fractions would be used in the exact overall ratings and attempted to find a simpler approximation.

So for those of you who aren’t statistics nerds, this equation shows that only 3 individual ratings matter for kickers: Awareness, Kick Power, and Kick Accuracy (This should be common sense).  Furthermore, to determine a kicker’s overall rating, all you have to do is plug in their individual awareness, kick accuracy, and kick power numbers into the equation above.

Lets take a look at how this works.  We will use the example of Packers kicker Mason Crosby.  His awareness rating is 73, his kick power rating is 98, and his kick accuracy rating is 78.  Let’s plug those numbers into our equation.

Plug those numbers into a calculator and you get the true overall rating for Mason Crosby which is 73 overall.  This works with every single kicker in the game.  Try it with one of your choice.

How Do We Interpret This?

In our equation, we multiply the awareness rating by 0.5529.  That means for every one point increase in awareness, you will see an increase in overall rating of .5529.  To clarify, this means it takes around 2 awareness point boosts to see an overall increase of 1 point.

What Do Those Numbers Mean?

We all know that really the only important attribute for kickers is their kick power because we (as users) control their awareness and kick accuracy.  But if we were simply trying to get the highest rated overall kicker, we would know that the most important stat to upgrade is by far kick accuracy because every 1 point upgrade in kick accuracy leads to a an increase in overall rating of .9072.

The Takeaway For Madden 25:

If you are one of the many people that focus exclusively on kick power (and rightly so) there isn’t much to take away from this article in terms of actionable advice.  It is however quite interesting that awareness is just as important to a kicker’s overall rating as kick power in Madden 25.