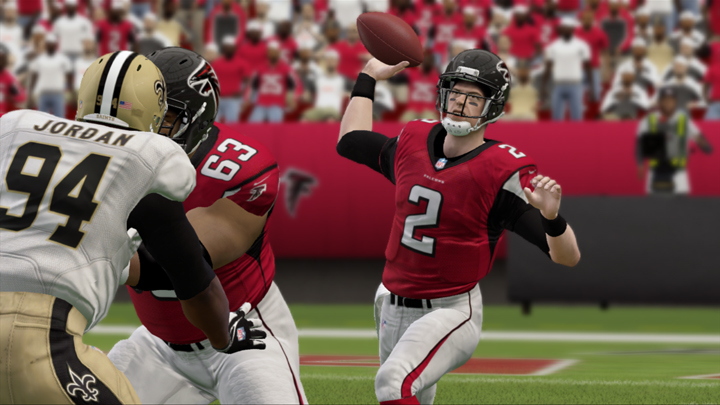 Recently EA Sports published their “Science of QB Ratings in Madden 25.” Many of their points were insightful into how the game is constructed. However, their post does not show how those ratings can be used by you, the player, in a player vs. player (PvP) game.

Almost every gameplay consideration listed under the awareness section of their post applies ONLY to CPU-controlled QBs. Therefore, most of this section is absolutely meaningless for a PvP game. We have created a set of awareness-neutral QB ratings that replaces the AWR rating of the CPU QB with the approximate awareness of you, the player (or your opponent). We believe this more accurately reflects the actual ability of a human-controlled QB.

Two interesting considerations that are mentioned in the post that DO matter for you are that AWR determines the QB’s decision on option routes and partially determines the pass trajectory. For option routes, this just means that the QB and WR need to “read” the defense the same way. Generally this won’t be a problem for beginning or intermediate Madden players who are looking for receiver button icons to tell them when and where to throw. For pass trajectory, this can be best summed up as: don’t try to throw the ball through linebackers with quarterbacks that have both low awareness and low throw power.

According to EA Sports, throw power primarily determines the “speed at which the ball is thrown for each of the passing trajectories.” What this means is that for short throws over the middle, THP is not that important. However, a high THP is crucial for completing sideline routes (for instance, curls by outside receivers or out routes).

One thing that is not explicitly mentioned is whether THP affects the distance the QB can throw. According to our understanding of physics, the maximum throw distance is determined by the speed at which the ball leaves the QB’s hand and the angle at which the ball is released. Therefore, a higher THP does mean that the quarterback can throw the ball further, which confirms the experience of the typical Madden player even if EA Sports won’t come right out and say it.

Madden 25, like some of the earlier Madden games, no longer uses a single THA rating to determine accuracy. Instead, THA breaks down into three categories: accuracy on short throws (SAC), medium throws (MAC), and deep throws (DAC). There were two statements in EA Sports’ post that surprised us.

First, we believe this is the first time that EA sports has publicly released the distances covered by SAC (0-20 yards), MAC (20-40 yards), and DAC (40+ yards). In our experience, this does not correspond to the typical Madden player’s understanding of short, medium, and deep throws. It is possible that these distances include the distance the pass has to go across the field as well as down the field, but we think that EA Sports would have mentioned that if it were true.

According to EA Sports, SAC determines the accuracy of passes to both a 4-yard stick route and a 15-yard dig route. Similarly, in our experience, wide receivers tend to run streak routes roughly 50 yards and then come back.  Therefore, DAC contributes essentially nothing to your ability to play with QBs that have relatively low THP – there is no way that you, a reasonably skilled player, are trying to throw a 50-yard deep bomb with a QB who has 85 THP.

A better THA breakdown, and one that we believe better encompasses both conventional football wisdom and Madden experience, is: SAC for routes up to 10 yards downfield (for instance, screens, drags, slants, most ins/outs/curls), MAC for routes between 10 and either 20 or 30 yards downfield (digs, corners, deep ins/outs/curls), DAC for longer routes (streaks, sluggos, some posts).

What this means for you is that most of the “deep balls” you throw, unless you wait forever for the receiver to get open, are actually covered by MAC – not DAC, and many of your throws on intermediate routes are actually covered by SAC – not MAC. Depending on your opponent’s pass rush ability, you may be better off choosing a quarterback with high MAC and throwing 25-35 yard streaks than one with high DAC and throwing 45 yard ones.

The second statement that surprised us is that THA exactly determines the percentage of passes that are “on target.” We always assumed that there was a 3-D window in which a QB’s pass would randomly go. The higher the THA rating, the smaller the window would be. So someone like Peyton Manning would almost always hit the short receiver in the hands, and sometimes the throw would be slightly low or slightly behind. Someone with low THA would have Joe Bauserman’s passing chart.

Apparently that’s not how it works. Apparently there’s a window that’s considered “on target” that is the same for all QBs, and a SAC/MAC/DAC rating gives the exact percentage of throws that will be in that “on target” window. So if you throw a deep ball with Aaron Rodgers, who has an 87 DAC rating, there is an 87% chance that ball is “on target.” To translate this to a Madden experience, if you throw 40 deep balls in a game with Aaron Rodgers, roughly 75% of the time you will have between 33 and 37 of those passes within the “on target” window. It also means that there’s a roughly 1% chance that he won’t even have 30 of those passes on target. That’s how randomization works.

EA Sports let us look inside how different QB attributes ratings affect gameplay, but they didn’t do a good job of explaining how they affect how you, the player, should use different quarterbacks. Our protips after reading and analyzing their post: