If you are new to Madden NFL games, or just don’t know all of the controls, we’ve put a guide together so you know how to shift the defensive line or how to put your defense into press coverage.

We’ll start with controls on offense and then move onto defense.

Lets first start with how to hot route (change the route a receiver is running).  To bring up the hot route menu, when you get to the line of scrimmage, you will hit the Y Button on the XBOX One or the Triangle button on the PlayStation 4.

That will bring up the screen below.  Notice the icons above your receivers’ heads. 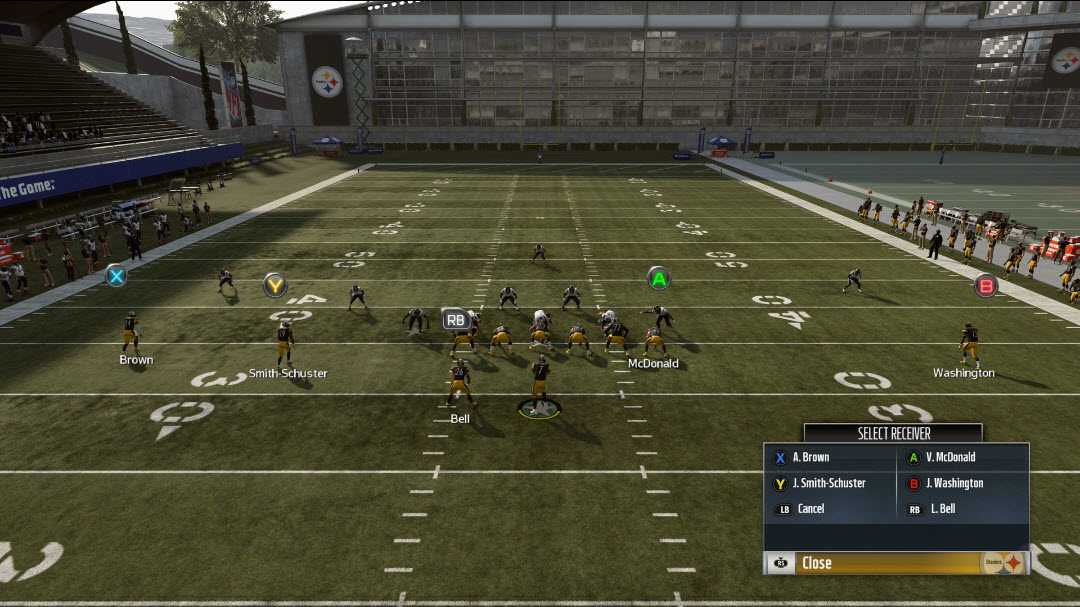 You select the receiver whose route you want to change by pressing the icon above his head.

For example, if you wanted to change Antonio Brown’s route, you would hit the X button on the XBOX One or the square button on the PlayStation 4. 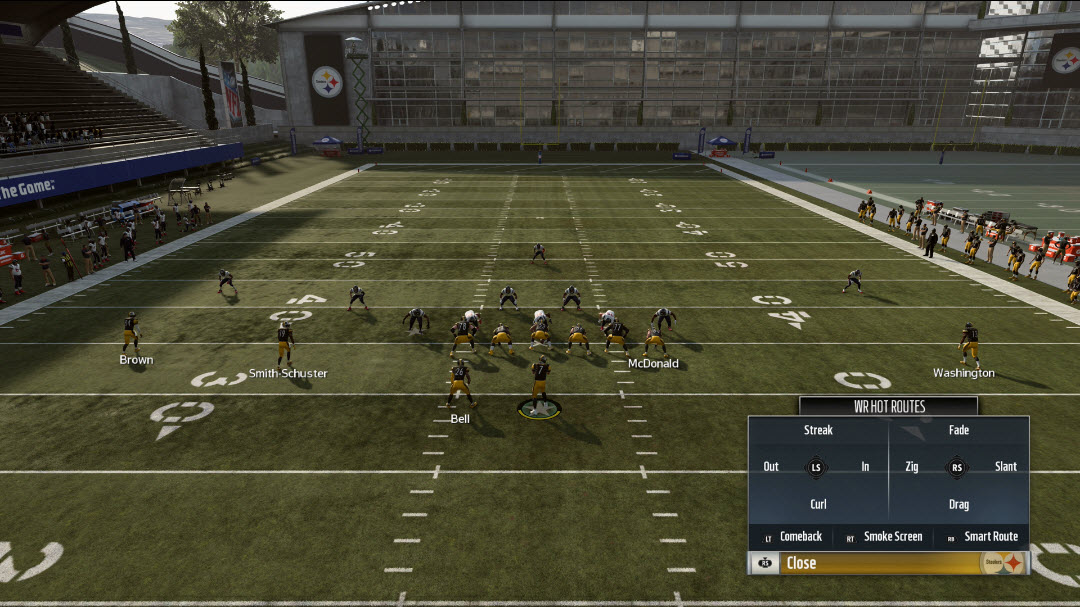 At this point, you will have a screen that comes up with all of the different hot routes available to you.  By moving the right stick or left stick certain directions, you can choose between the hot routes you want that receiver to run.

You will also notice the inclusion of what is referred to as a “Smart Route” on this screen.  That usually extends (or shortens) the route that receiver is running to the first down line.

For example, on a standard in route, the receiver runs 5 yards downfield and then breaks in.  If you had 10 yards to go for a first down (for example first and 10), you could smart route that receiver and he will run 10 yards downfield before he breaks inside. 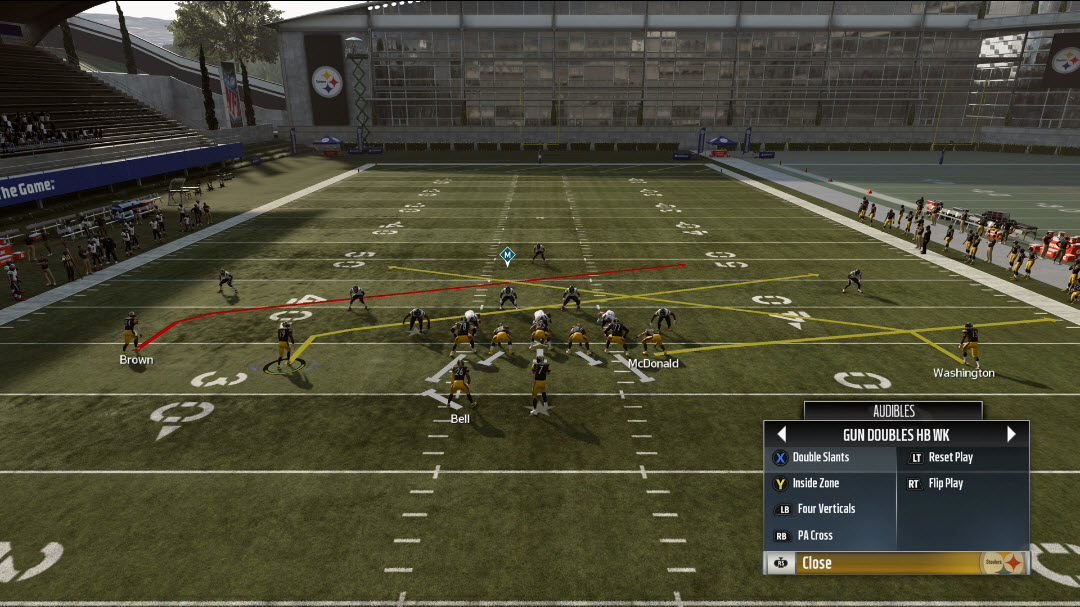 There may be times in a Madden game where you think a blitz is coming from the left, right, or up the middle.  This is a time to use slide protection.  Slide protect tells your offensive line to shift a certain way after the snap.

To bring up the slide protection screen, press L1/LB when you get to the line of scrimmage and then left, right, up, or down depending on which way you want to slide protect. 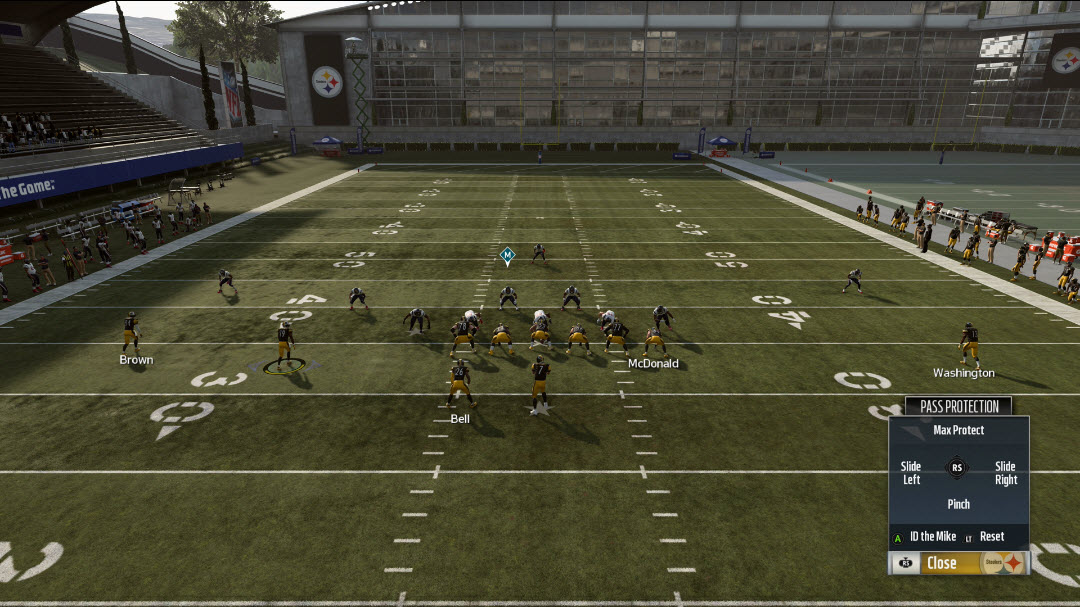 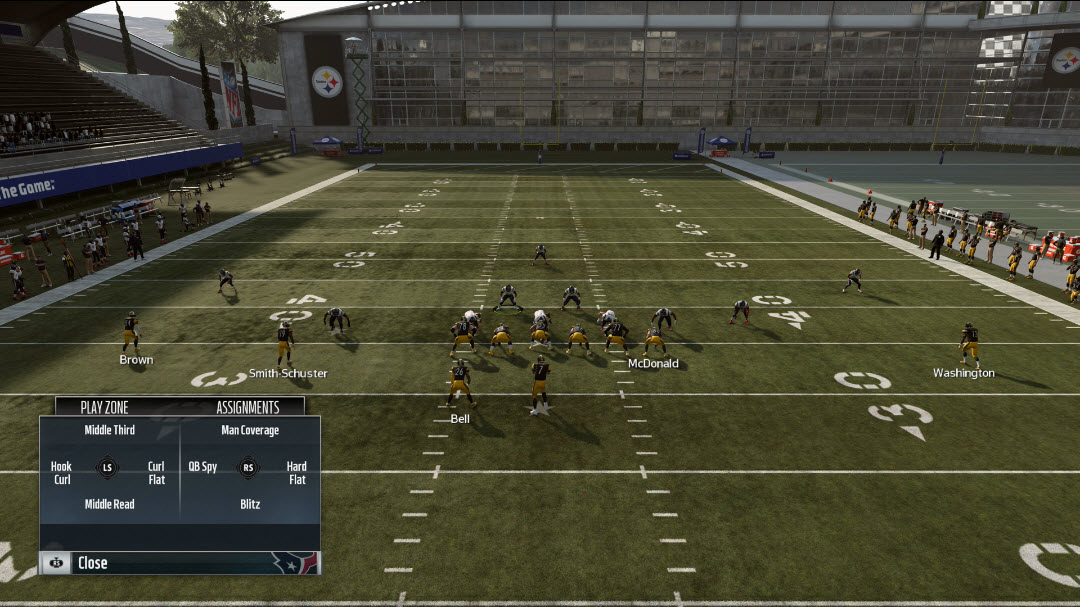 Once you click the A/X button, the screen above will come up.  You can then direct the player into a zone by using the left stick or other coverages using the right stick.

To call an audible on defense (change your play), hit the X button on the XBOX One or the Square button on the PlayStation 4.  You can then select a play within the formation you are already in using the buttons, or you can scroll over to the left or the right to change formations. 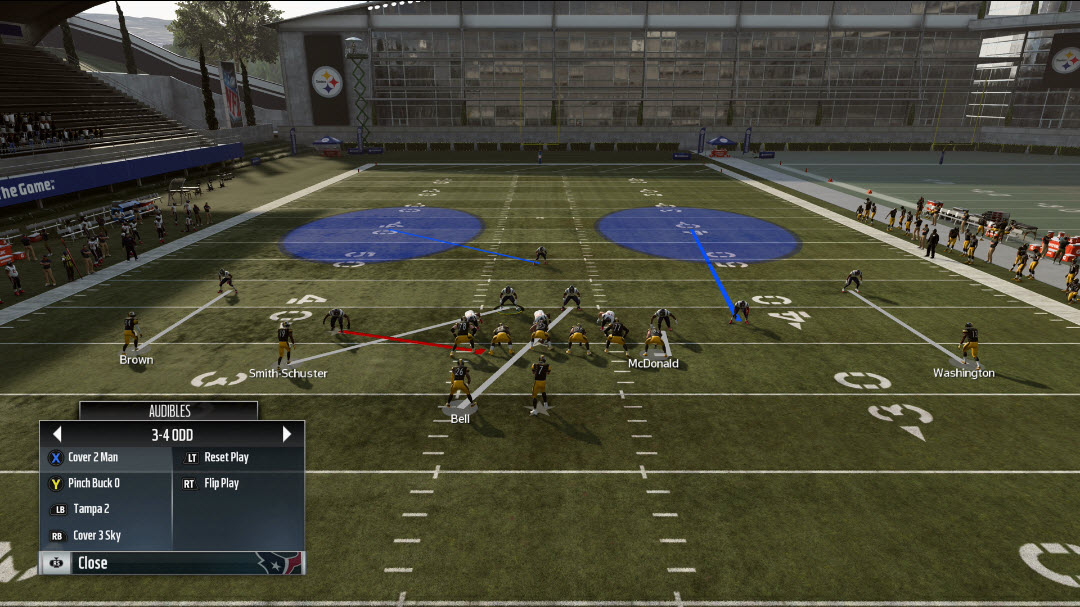 To change the coverage of your defense on a global level (instead of individual players), you will want to press the Y button on the XBOX One or the Triangle button on the PlayStation 4.

At that point, this screen will come up. 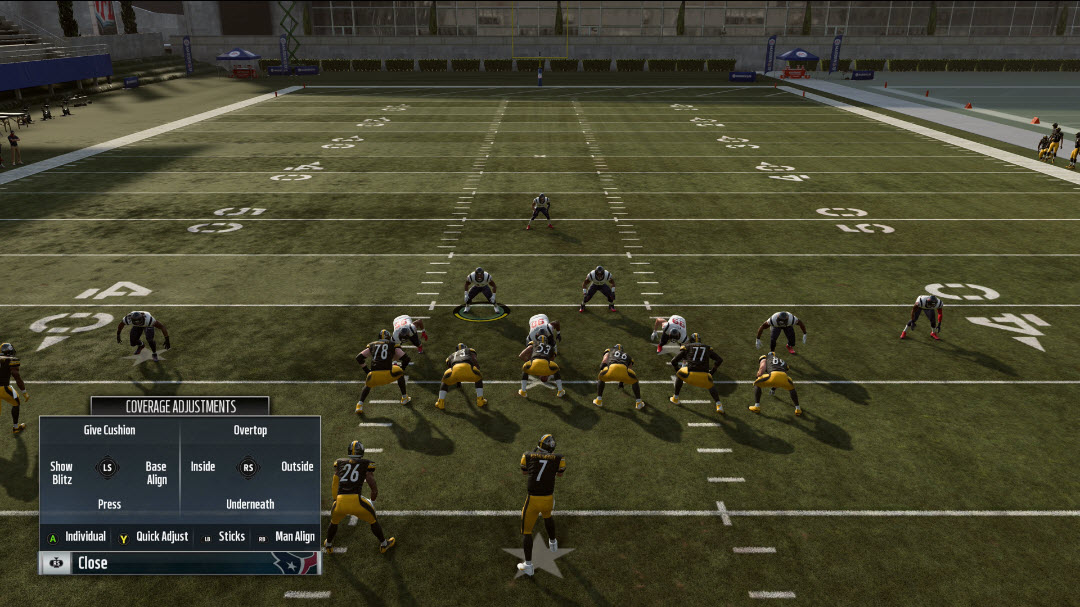 You can then choose to give cushion (back the defense up), show blitz, base align, press, or shade coverage overtop, underneath, inside, or outside.  You can also make individual adjustments, quick adjustments, protect the sticks, or man align at this point.

To make global changes to your linebackers in Madden, you want to press RB on the XBOX One or R1 on the PlayStation 4.

That will bring the screen below up. 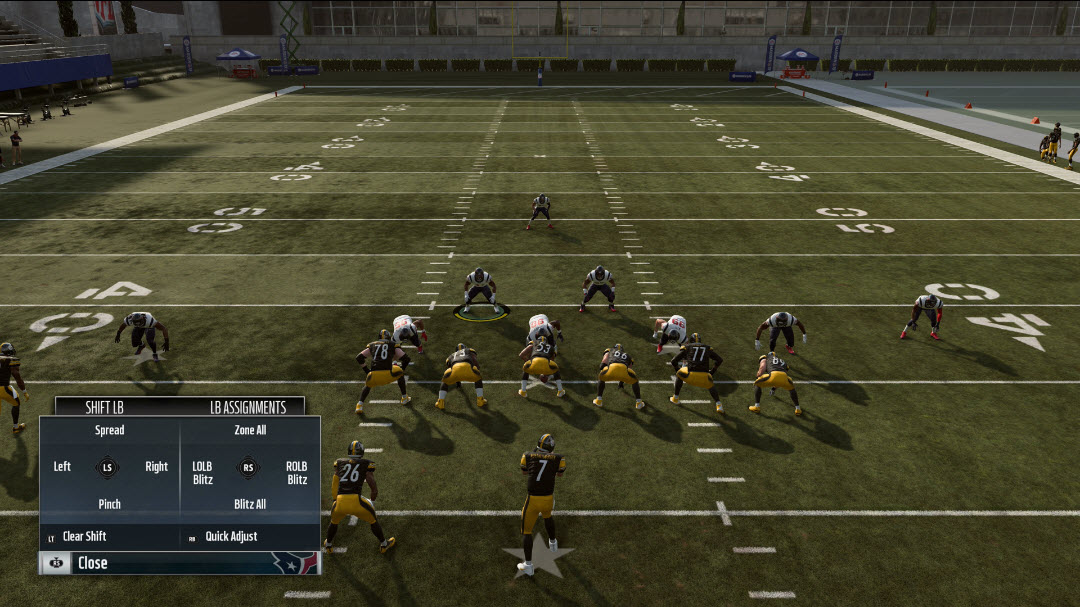 You can make adjustments to your defensive line by pressing LB on the XBOX One or L1 on the PlayStation 4.

That will bring up the screen below. 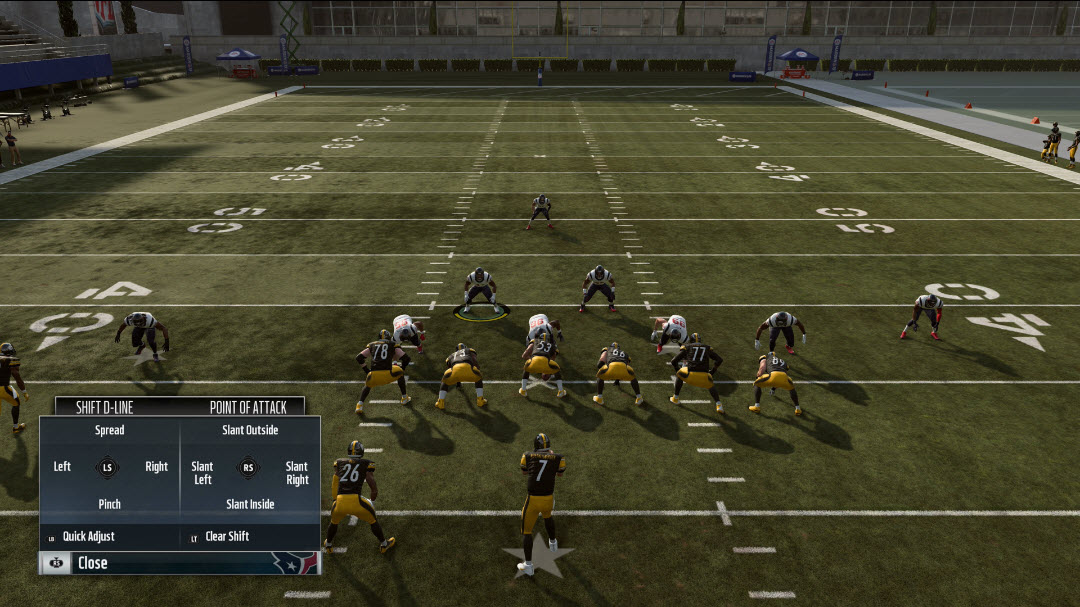 At that point, you can shift the defensive line by using the left stick, or crash the way they rush (their blitz angle) by using the right stick.

That will bring up the screen below.

To shift the whole defense one way or another, use the left stick.  To guess the play the offense is running, use the right stick.  You can also QB Contain or or commit to either the quarterback on an option or the running back on the option at this screen.

If you have any other questions with how to set something up in Madden, feel free to leave a comment below.