EA Sports has released the latest title update for Madden NFL 20 and it is now available for download on Xbox One, PS4 and also the PC. Madden 20 update 1.10 is full of new features and it fixes many of the issues that Madden players have been experiencing in both presentation and during actual gameplay.

Perhaps the most important aspect of this latest title update is the addition of Superstar Abilities for offensive lineman. As always, the pros at Madden School have all the details, key highlights and game fixes.

Here all of the new Superstar abilities as well as the players who have been equipped with the abilities as taken from the EA Sports Madden NFL 20 website.

Offensive Linemen have been added as Superstars, with new run blocking and pass blocking Superstar Abilities

Not equipped to any player on the default roster, but will be available to earn in MUT & Franchise

The new offensive lineman abilities should bring about new strategies and Madden players who figure out the best ways to use these new Superstar abilities with their O-lineman will have the early advantage. To go with these new abilities is a brand new gameplay feature in the form of a pre-play mechanic. 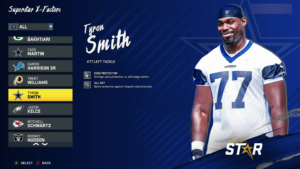 Madden fans have probably noticed the new ‘pass block double team mechanic’ on their pre-play passing adjustments menu. The new mechanic takes the place of the ‘pinch’ adjustment, which allowed users to adjust their pass blocking, or run blocking, to crash down to the inside and block the middle of the defensive line and linebackers after a play starts.

Check out the details and notes from the EA site below:

Madden 20 update 1.10 has a long list of tuning fixes and gameplay updates plus new features that you can read all about on the Madden 20 site. Check back regularly with Madden School for all of the latest news and developments from around the world of Madden 20.

Want to take your Madden 20 game to the next level? Register for your Madden School Unlimited Membership and you’ll instantly gain access to all of Madden School’s professionally developed ebooks along with 24/7 support. Don’t wait another second. Sign up today and start schooling your competition tonight!